(This is the second of three blogs about innovative developments in economics and business which, it seems to me, may have a big effect on many campaigns) 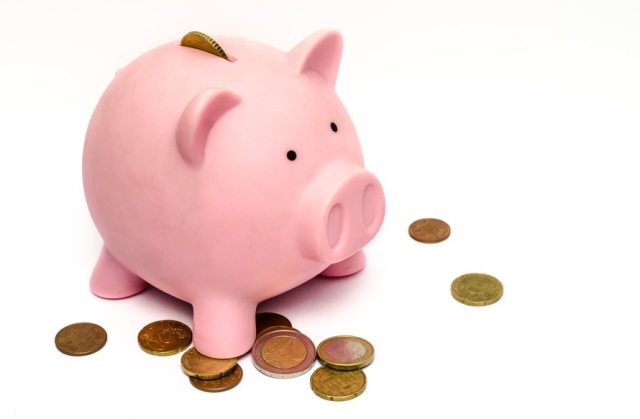 At the end of last month, Catherine Howarth, Chief Exec of the pension fund specialist NGO Share Action, announced a campaign to push oil companies Shell and BP towards investment in renewable energy.  We have of course been here before. 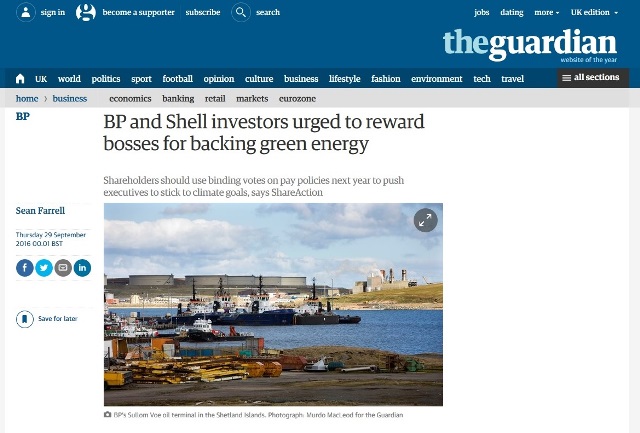 From the late 1990s both companies talked great talk about becoming ‘energy companies’ and going green but when governments failed to organise taxation to make this more profitable than investing in new oil and gas, they both reverted to bad old fossil fuels.  BP dropped ‘Beyond Petroleum’ and Shell dropped solar, and then wind in 2009. Now in the 2016 post-Paris political climate, and lagging way behind other newer renewables players, Shell has re-started its wind business with the creation of a new ‘green energy’ division.  But Howarths campaign could pose much more acute incentive to deliver than general political commitments to phase out fossil fuels because she proposes that shareholders demand that executive bonuses are pinned to investment in green energy.  In her sights are ‘responsible investors’ such as pension funds, who can get to vote on executive pay.

Money as they say ‘talks’ and from the child with its piggy bank up to the most ‘remunerated’ executive, it provides an incentive.  So it’s not surprising that this strategy is not entirely new.  What’s different is that the context has changed, making it far more likely to work.  That in turn means it should be higher up the list of tactics campaigners consider when they come to decide what tactic to build a strategy around.

What’s changed is not so much the formal rules – as specialists have pointed out, the requirements for Boards and CEOs to act on non-financial measures of performance, for instance those set by the US Securities and Exchange Commission – remain mainly rudimentary or non-existent.  It’s public opinion, and hence politics.  Today politicians are far more willing to challenge Executive pay on behalf of the public rather than defending it as a necessary freedom for the private sector to decide, lest we stifle entrepreneurship and lose its trickle down benefits.

In an era of corporate excess, recession, stumbling growth and ‘rewards for failure’, freeing corporations from social constraints is no longer a popular or particularly credible mantra.  There is of course abundant evidence that on subjects such as carbon dioxide emissions from fossil fuels, achieving efficiencies and using renewable energy increases profits (unless you sell fossil fuels) but the ‘facts’ have less to do with it than the public mood.

So for instance Britain’s recently appointed Conservative Prime Minister Theresa May, is making great play of her desire to stick up for workers and get them onto corporate Boards.  Bonuses in general are under fire, from London and the Hague to Australia and points in between and beyond.

Campaigners are often lefty or left-leaning and so eschew trying to influence businesses, sometimes preferring instead just to condemn them and call for political action instead.  They need to recognize that this mood of corporations coming under attack from the Right, is an opportunity which may not last.  If they care more about outcomes than feeling good, it’s an opportunity to be taken, and investor and customer pressure may be the faster route, with regulation following on from behind.

Politicians will certainly be emboldened by knowing that the media and consumers have turned against the corporate executive class, who are increasingly easily spooked by negative social media.  Bonuses are simply the most egregious example of the huge wealth inequalities now developed in most societies, and therefore the most responsive target: smaller has become ‘better’.  Last month for example, the boss of a ‘troubled’ British railways company unfortunately named Go-Ahead, which owns Southern Rail operator Govia Thameslink, announced that he had waived his right to a bonus despite increased profits, because the service to customers had been so bad.  The Guardian reported that he said “It just felt like the right thing to do”.

Campaigners thinking about the Bonus Pinning option will find that there are quite a few examples of blue-chip companies which are already a way down this road.  The British retailer Marks and Spencer for example, linked executive bonuses to hitting sustainability targets when it needed to overcome internal foot-dragging and give some teeth to its much-lauded ‘Plan A’.  Another sustainability leader, the Anglo-Dutch food and household products giant Unilever, has done much the same.   M & S wrote in 2012:

Another key factor was the introduction in 2010/11 of a Plan A target for every M&S Director as part  of their annual bonus objectives – and their ‘cascading’ through teams. This has ensured that Plan A is not seen as a ‘nice to have’, but a must-do, that is every bit as important as hitting sales or margin targets. It also ensures that Plan A progress is reviewed by senior management on a regular basis over and above the normal Plan A governance structure. 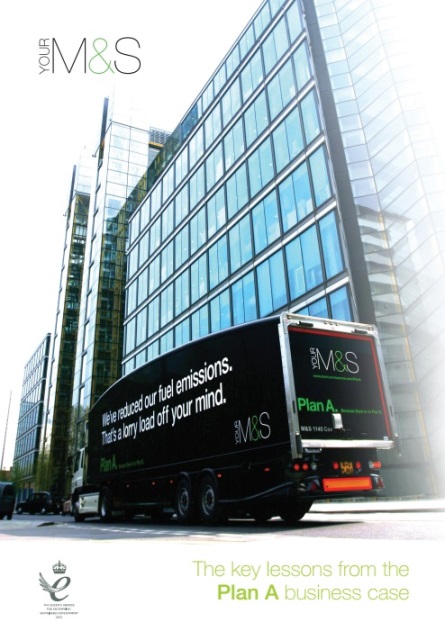 Plan A: bonuses were part of it

An indication of how far this has gone in a few cases, and how much attitudes have changed and can change, comes from DSM, a Dutch multinational which adopted some radical sustainability targets.  In 2014 DSM North America President Hugh Welsh said:

I didn’t get my full stock bonus last year. It wasn’t because I didn’t meet my revenue or profit goals; I exceeded them. Instead, it was because my carbon emissions reduction efforts fell short, partly due to the integration of multiple companies DSM North America purchased in 2012.

DSM tied all managers’ compensation to sustainability in 2010, with targets related to greenhouse gas emissions, energy and water usage, eco-friendly product development and employee engagement, as well as – of course – profit. Last year was the first time in my career – on Wall Street, American Standard and DSM North America – that I missed my numbers.

And you know what? I’m not mad about it. Instead, I’m more determined than ever to meet the goal this year. By not giving me all of my deferred stock compensation, my company made it clear it means business when it comes to sustainability practices. In my opinion, this is the way it should be.

So far these are still exceptions rather than the rule: when Unilever CEO Paul Polman got a £431,775 top-up to his bonus payment in 2013 ‘in large part for his work leading the company’s sustainability plan’, it was treated as newsworthy, whereas a similar reward for increasing sales of detergent or fats and oils would have gone unremarked.  Bloombergs headlined its report:  ‘Unilever Hands CEO Polman $722,000 Bonus for Sustainability Work’, as if something vaguely improper had happened.  But what’s actually happened is probably that sales of fats, oils and detergents are now linked to sustainability measures.

Alcoa and Intel, two huge and very different companies, have also linked pay to environmental targets.  In the case of chip-maker Intel this has meant giving every employee an incentive, and resulted in a 35% reduction in absolute greenhouse gas emissions and a 28% reduction per-chip within four years.  Even the most business-sceptic campaigner might think there’s something happening here.  A 2014 report put the proportion of companies linking executive pay to sustainability targets at 25%.  A 2010 study of publicly traded companies in the US, the UK, Australia, France, Germany, and the Netherlands, put the figure at 29%.

Even in companies like Alcoa the total proportion of the rewards determined by such factors can be low, for example just 1% but in some cases it is a much bigger factor.  In the case of Paul Polman at Unilever he got an extra 37.5% bonus for sustainability factors.  In the case of BP and Shell, the call is directional, as the internal trade off is a zero sum game over investment of profits either towards renewables, or towards more oil and gas.

Every company will have its own internal and external story, and every NGO, not-for-profit or other lobby group which tries to influence them will have a different perspective but no company is totally isolated from society, even oil and chemical companies.

In recent years the ‘NGO’ end of blogosphere has been full of retrospectives, often anguished voyages of self-doubt, by veterans of the “Occupy” movement and “Wall Street Protests”.  That movement can certainly take some credit for crystallizing and perpetuating public disquiet about how finance and big business work,  and how that affects the wider public interest.

Recession driven by the credit crunch, debt crises and asset bubbles has further undermined public and political confidence in the ‘neo liberal’ project.

Within and around companies, these currents have met up with those from older 1990s initiatives such as the ‘Sustainable Development’ movement, Socially Responsible Investment, and their yet older antecedents. Amongst other things, these brought process, targets and measurements for public goods and externalities.

In addition many developed economy governments are now struggling with domestic stresses over how to balance public expenditure across generations, the politics and expectations of funding pensions and health, the affordability of housing, and the politics of economic migration.

Add these together and big business bonuses, available only to the 1%, quickly float to the surface as discrete, soluble looking examples of what is wrong.

At the same time, after decades of hesitation and argument, governments have accepted climate change as real, immediate and requiring a total economic restructuring.  Carbon and energy choice is an obvious metric with which to hold corporations to account in the public interest.  ‘Diversity’ in sex, age or ethnicity in hiring personnel is another, which also has well established metrics.  But these are far from the only ones.  What for agrochemicals for example ?  The amount of biodiversity in places where their products get used ?  Or for human rights ?

Pin The Tail on the Donkey

To my mind, the encouraging factor which underlies all of these is the influence of public opinion.  However erratic and partial the social elastic may be, it still functions, despite the fluid reconfiguration and even fusion of roles amongst media, politics, business, markets, consumers and citizens.

Bonus Pinning may not be a game with a permanent future but in the short to medium term, it could be a great way for the public to pin the tail on the corporate donkey. 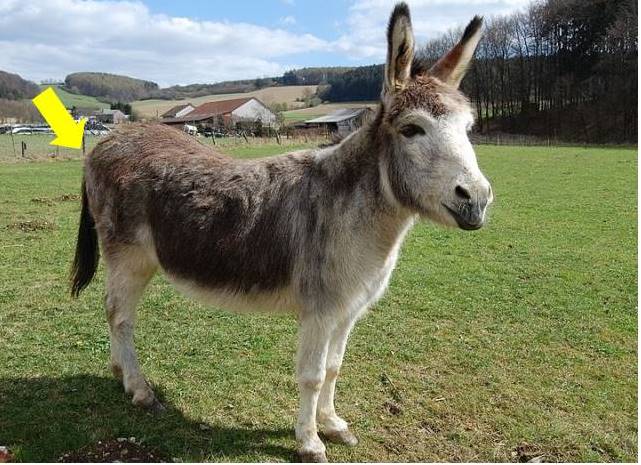