(photos Open University and The Guardian)

When Theresa May said “Brexit Means Brexit”, nobody knew what it meant.  Well they do now, they think it means Trump.

Donald Trump was elected and the UK referendum found for Brexit both by the narrowest of margins.  Now May’s gamble on an early alliance with Trump has elided the two decisions, and made a protest against Trump a protest against Brexit.  An unintended consequence of her attempted deal making with Trump is to provide the focus for popular opposition which she has strived to avoid by hiding behind the smokescreen of Brexit-means-Brexit.

By not just standing shoulder to shoulder but going hand-in-hand with Donald Trump, May has made herself a lightning rod for public dislike of Trump’s policies, and provided an intuitively understandable reason for Brits to worry about Brexit.

Without very compelling evidence to the contrary, it looks to many like Brexit means ‘Trump’. 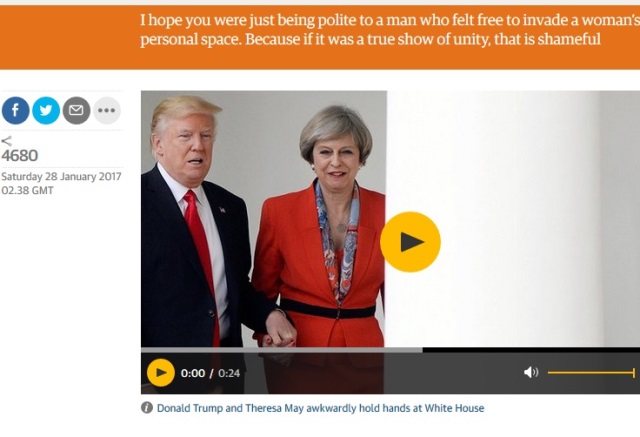 Theresa May’s domestic strategy has been to try not to disturb the pond by making any big ripples: no sudden moves, no clear signalling of consequences with clear losers, no sharp edges, nothing for opposition to rally around, and be as dull as possible.  Give it time and opponents would give up and accept the inevitable.   After some initial protests of dismay, most of the stunned UK Remain camp fell relatively quiet: the ‘grass roots’ missed the summer holiday opportunity, Remain politicians were divided, and the less engaged public majority shrugged and got on with life.

Under the surface of course the UK’s Brexit preparations are fraught, complex, fractured, strained and chaotic but most people, especially those who voted Leave, are content to let ‘them’ sort it out.

Many Remainers have assumed, whether they aim to salvage the least damaging Brexit possible, or some new and renewed relationship with Europe, that it would be legal process and practicalities which might undo May’s plan, so they had to play a long game.  Labour’s Jeremy Corbyn has helped Theresa May by hoisting a white flag before any real political struggle could start.

Brexiteers in contrast have been buoyed by good short term economic feeling in the UK but businesses are not convinced, and on both sides of the Atlantic, it is business which will provide a test of policy which cannot be mind-brushed away with ‘alternative-facts’ from La-La Land.

So under pressure to show Brexit can ‘work’, an emboldened May reached out to Trump to make Brexit seem more viable: a trip to Washington to create ‘optics’ suggesting that Britain could do a rapid trade deal with the US.  Even less popular abroad than at home, Trump’s interests were also served by meeting May: be seen to be able to work with another country, and get praised.  May responded positively.

Trump’s agenda is primarily domestic.  He is in base-pleasing mode, coming good on his promises with a rapid barrage of actions which show him wielding power.  Trump sits in the Whitehouse, recognized by admirers and critics alike as ‘the most powerful man in the world’.  He signs off Executive Orders with a flourish, like Zeus sending down lightning bolts from Mount Olympus. 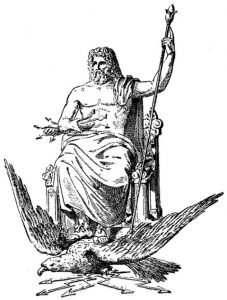 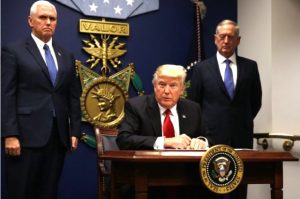 It plays well to Trump’s unmet need to look powerful and successful.  Protests that appear to be mainly from Democrats makes them easy to dismiss.  Criticism by DC insiders merely shows that he is shaking things up in Washington.  Analysis from fact-checkers and experts can be crushed with alternative facts.  All good in the Bannon play book.

The Consequences For May

If Trump’s bolts of lightning merely caused alarm in the US, this would not create great problems for Theresa May and Brexit but as the botched immigration controls immediately showed, they can have much wider implications.  Blameless American families detained at airports were the most empathetic people in the story: it felt wrong, it felt unjust.    Last night there were protests up and down the UK as well as across the US. 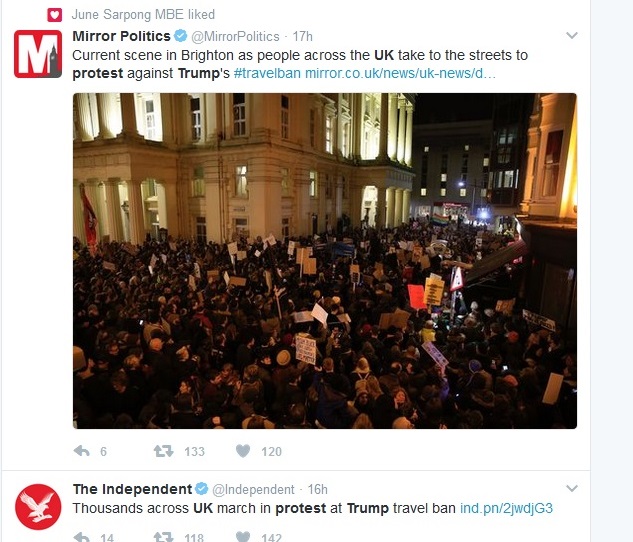 Many of Trump’s  policies that so please his base also resonate with the anti-foreigner, climate-denying, inward and backward looking reflexes of the more entrenched end of the UK Brexit base.  This however is a much smaller number of people than those who voted Leave.

Trump’s America project begins to look like, and feel like, a blueprint for what Brexit means for Britain.   Trump’s lightning bolts are turning into lightning rods for Theresa May.  Trump is providing the focal points for protest and opposition which May has been so careful to avoid, and she can do little about it.  By coupling Project Brexit to Project Trump, May has re-activated the values base of the Remain vote.

Faced with one and half million British citizens quickly signing a petition calling for the postponement of Trump’s invitation to make a State Visit to the UK, Theresa May could have clearly distanced herself from Project Trump by ‘siding with the Queen’ and finding an excuse to put it off.  Instead she quickly announced that the invitation still stood.  By doing that, no matter how much the UK Government quibbles and wrings its hands about Trump’s assaults on refugees,  climate realists or Europeans, when her government is tested by asking whose side it’s really on, for many people in the UK Theresa May has already provided the answer: she’s on Trump’s side.

Having gone to so much trouble to distance herself from Nigel Farrage of UKIP, it is a remarkable political mis-step.

Trump is hardly into his first one hundred days.  While nothing is certain, he seems most likely to continue as he has begun, as long as he can.

May has a very different problem.  She is progressively alienating much of Europe, yet she has to negotiate Brexit with Europe.  Now, every time Trump ignites more opposition, it will rock her boat.  For Remainers, Trump is a gift which may go on giving.

In terms of polls and numbers it remains to be seen how her alliance with Trump will go down with Britain, and more particularly ‘Middle England’.  It has definitely activated protest.

So probably by accident, Theresa May has also finally given an answer to all those who asked what she really meant when she repeatedly stated “Brexit means Brexit”: now Brexit seems to mean Trump, and right now it’s hard to see how she can undo this.