Why Simply Countering ‘Fake News’ With ‘Fact Checking’ May Not Work

The news is full of reports of moves to stem ‘fake news’, for example involving Facebook, Google, French TV, and the BBC.   This is ‘Fake News’ Week on the UK’s Channel 4.  New entities such as Full Fact, are creating online tools to enable journalists and consumers to identify ‘fake news’ in various forms, and taking the methodology further than established outlets such as such as Factcheck.org, PolitiFact and Snopes.com.

Meanwhile campaigners, upholders of standards of democracy, and those who did not vote for Trump in the US election or voted Remain in the UK’s Referendum on the EU, are alarmed at the methods used in the Trump and Leave campaigns to tailor (sometimes untrue) messages to what particular psychological groups wanted to hear, and the way they ‘got away with it’ by gaming the systems and reflexes of the conventional news media.

As Andrew Wigmore* who worked for UKIP and Leave funder Arron Banks, subsequently told Edward Stourton of the BBC:

“we actually were monitoring Trump, and he started sending out all these crazy messages, just to get attention.  This was brilliant for Arron, he loved this, so we started sending out some of the most outrageously provocative tweets, and they were all immigration-led, so when it comes to the bad stuff we totally took the Trump rule book, and tried to apply it here.  And we quickly discovered, it worked.  And we got more and more fearless, you know, we would talk about who particularly we were going to pick on, whether it was an individual, a politician or a  party, or a subject”

The old media assumption was essentially that there were consequences to actually lying, at least when it ‘mattered’ as when dealing with ‘serious’ things like politics, and that although spin and bias were unavoidable, ‘news’ was tested against the output of rival channels and standards of actuality, that is some form of objective truth.  Trump and Leave demonstrated that this need no longer apply, and so the would-be fact-checking battlers against ‘fake news’ are now grappling with a new reality in the shape, particularly in the US,  of a government which professes to believe in ‘alternative facts’.

This domain of believing anything you want to believe because it feels right has always existed but until now it was confined to gossip, cults, conspiracy theorists, unregulated advertising and marketing, totalitarian regimes, religions, the paparazzi, controversialists, drama, fiction, and arguably if intermittently, inter-personal relations.  In public life it was suppressed and constrained by laws and media norms which are now limping after social media like a lame duck in the wake of a tsunami.  That wave carried Trump into the Whitehouse and the UK into Brexit.

The cry ‘something must be done’ is one I agree with but the problem many of these projects face, and which may well undo them, is values differences.  Some mainstream politicians for example, are seeing the current advantages of the Alt-Fact World, and using it to try and push further against their enemies.  For instance on 6th February British MP John Redwood, rolled up the BBC, scientists and climate change into one example of why ‘alternative truth’ is needed.  By treating political differences based on ideological belief, as equivalent to belief or not in what is established by scientific method, politicians legitimize and normalize any Alt-Fact, even how many people are or are not standing in front of the Whitehouse in a photograph.

The fact that John Redwood includes the BBC as an example of ‘bias’, shows the problem.  No fact checking system produced by the BBC is likely to satisfy John Redwood.  I don’t know but he might quite like one produced at the Daily Mail or the Daily Telegraph but certainly not The Guardian nor presumably New Scientist.  [In Britain most national newspapers have quite distinct values-profiles. In the US it is more the TV channels that have distinct values-profiles].

For any sort of global fact-checking or Truth Rating system to work, it will need to be accepted across values differences, which to put it in contemporary terms, means across the Leave-Remain divide in the UK, and across the Democrat-Republican divide in the US.  This means involving people from different values groups from the start, not fashioning something that one lot love and then trying to sell it to those who will hate it because of the predicates, language, reference points, source and assumptions, let alone the likely consequences.

It is pretty certain that the EU Referendum and the Trump election divided UK and US societies along the Power versus Universalism axis, just one but usually the most powerful one, of the many ‘values antagonisms’ found in all societies and mapped by Israeli professor Shalom Schwartz. 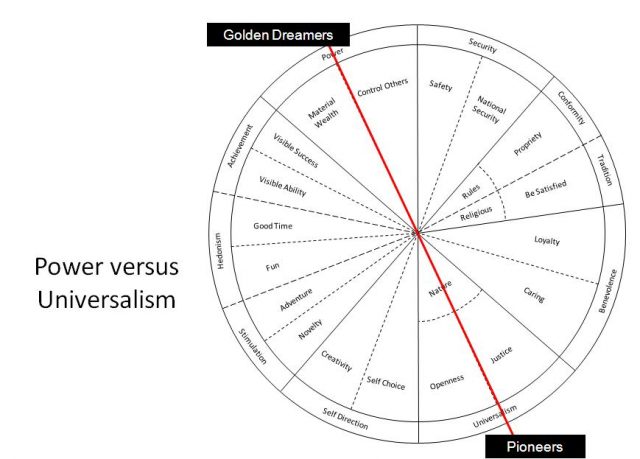 Converted into the Values Modes and Maslow Groups of CDSM, this looks like a horizontal cut across the ‘values map’, cleaving society along a line with Settlers on one side, together with Golden Dreamer Prospectors (pro Trump, pro Brexit), and Pioneers on the other, along with the Now People Prospectors (pro Clinton, pro EU/Remain). It won’t have been a 100% divide but it was a very strong sorting effect, of which more another time.  (See also this previous blog). 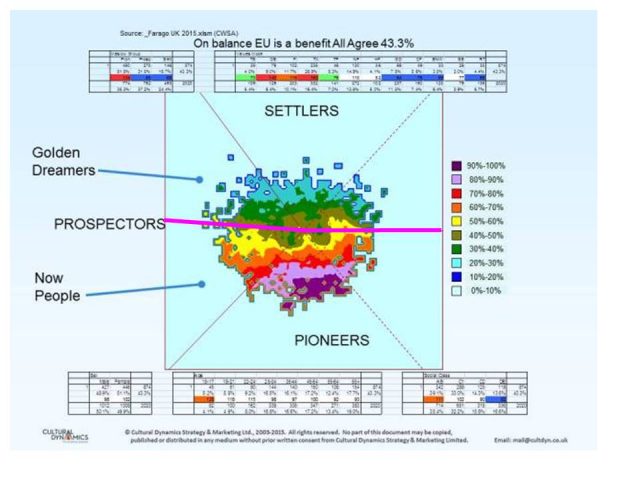 This in turn means that to be effective, any ‘fact checking’ system will need to be supported by at least these two different (if huge) groups.  There are ways to do this but right now all the initiatives I’ve seen appear to come from individuals and institutions on the Pioneer – Now People side (the losers in both polls).  That’s not good.

With such recent polarisation in both the US and UK, some form of arbitration is going to be needed.  In arbitration both sides agree that a third party will make the important decision, with that third party often picked by intermediaries, who are themselves trusted by the two conflicted parties.  This may be much more complicated than just involving three individuals.

Not everyone will want to play ball but that’s not necessary.   It might mean for example finding some senior Republicans or institutions that senior Republicans trust, to pick the intermediaries from their side, or maybe even Fox News,  rather than expecting Messrs Bannon and Trump to be involved.  On the other could be senior Democrats and maybe CNN.  And something similar in other countries.

It would be possible to sell such a system after it is up and running, if it had sufficient utility value, for example if a critical mass of media and social media adopted it as the standard, and if businesses and stock markets started to do so and if it spread globally.  But with the funds at their disposal, it would also be perfectly possible, if for example the Settler-Golden Dreamer-alt-right wanted, for them to launch and promulgate an Alt Fact Checker, thereby simply moving the values stand-off from one place to another, into an argument about fact checking and standards systems, rather than ‘facts’ and ‘news’.

* Mr Wigmore is pictured here in this Daily Mail photo, with Mr Farrage and others on a visit to Mr Trump in Trump Towers

Thanks to CDSM for use of slides in this blog