The Bubble Print: A New CSR Frontier for Google and Facebook

Many commentators, pundits, politicians, journalists, NGOs, and even normal people, are talking about ‘bubbles’ and Brexit, and as my previous blog suggested, such ‘bubbles’ can easily form along values divides. 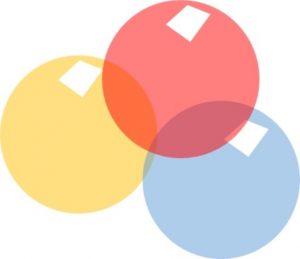 The way we now ‘living more separate lives’, aided and abetted by the digital echo-chambers of social media, may have helped cause ‘Brexit’ and helped make it unexpected.   So many of us have our Brexit story, and our own bubble story, and here’s mine.

On the morning of 23rd June, I went along to my local Polling Station (see video) to vote in the EU Referendum.  I went quite early because I had a two-hour journey ahead.  I was due to join a couple of days of meetings in Cambridge, run by the ‘Cambridge Institute of Sustainability Leadership’ (CISL) to which I make a minor contribution.

When I arrived at the Methodist Church Hall of Wells-Next-the-Sea I found it was busier than it usually is on polling days, and my heart sank.  As a ‘Remainer’ who had been writing blogs warning that a values driven split could tip Britain into leaving the EU, despite what most of the polls said.  What I saw confirmed my worst fears.  Here’s what I wrote the next day to an enquiring German friend:

‘Yesterday morning I went to vote in Wells next the Sea where I live and although I have lived here since 2000 and know a huge number of people having been involved in a lot of local community/ political activities, there were lots of people who were obviously Settlers and lots of them very old, who I had never seen before.  They were literally being brought in on wheelchairs and on walking aids.  It was not a good sign’.

What Did The Germans Ever Do For Us ?

A Cambridge friend told that the BBC had made a news report from the City just before June 23rd.  In the interests of ‘balance’ the reporter had tried to find a would-be Leave voter, and a would-be Remain voter to interview.  A Remainer was found immediately but it took another 71 people before they found the Leaver.

Little surprise then, that when I walked into town to join the ‘networking’ and ‘stocktaking’ meeting of the CISL, the day after the vote, people seemed unusually subdued despite the rush-hour activity and bright sunshine.  Arriving at the conference venue, I found many of the Cambridge-centric audience murmuring to one another in funereal tones.  Others paced about outside, mobile phones to their ears.  Distracted, dismayed and bewildered, they resembled a gathering of relatives who had all unexpectedly lost loved ones in a sudden disaster.

“I don’t understand it” boomed one participant, “How did this happen? I simply don’t know a single person who voted Leave, and nor do my friends”.  Exactly, I thought to myself but I do.  I know lots of them, because where I live we do not live in such separate bubbles, and no longer feeling any enthusiasm to discuss ‘rewiring the economy’ I went home early.

A couple of days later I wrote to another friend, this time a long-standing campaigner with a deep involvement in British politics who I had met up with in Cambridge on the evening of polling day.  Here’s a bit from my email:

“As I said to you in Cambridge, I thought the game was up the moment I went to the polling station in Wells and saw squadrons of Settlers and Golden Dreamers I’d never seen before, being literally wheeled out to vote.  For many of them it was a last chance to vote against a complex of stuff they never understood or liked, and had become a patriotic duty.

Friday evening Sarah [my partner] and I went to the pub.  We met a friend who declared he was too ill informed (educated) to have voted.  His friend who he worked with (carpenters) declared he had voted leave because “I am a working man” and “I was a soldier”.  He “wanted his country back”.  “I’m a working woman” said Sarah.  He looked slightly baffled.  Our friend said he also thought ‘the whole system was wrong’. By way of explanation he offered: “they tell us to recycle our beer cans which is right and I do but then they make these cheap things that wear out, it doesn’t make sense”.  His friend agreed.  An example, they said, was washing machines that only lasted a year or so while the good ones went on for at least 7 years and could be repaired.  “So which type is best?” I asked.  “Miele” they said in unison.  “Only a numpty would buy anything else”.  “German then ?” I said – they laughed.  “Yes like my VW” said the Brexiteer.  So I asked, “should they have said that in the campaign ?” “Oh yeah that would have been a good idea, it might have made a difference” said the Leave voter.

It was ‘what did the Germans ever do for us ?  Nothing.  Except the washing machines. And the cars, and making the EU work …’ ” 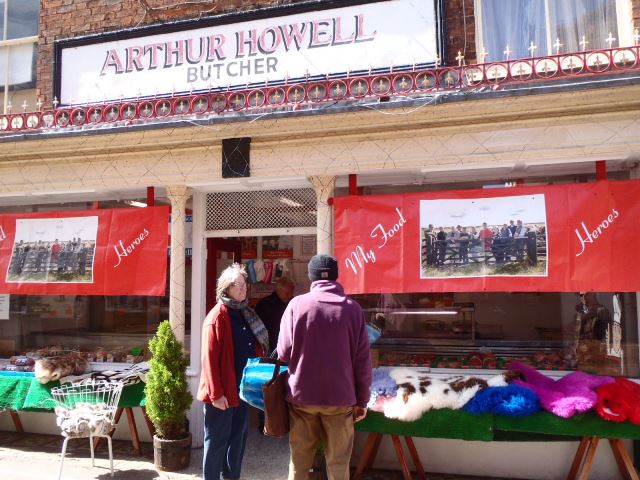 Outside the butchers, Wells-Next-the-Sea

The point being that Wells Next the Sea (population about 2,000 in winter, more like 10,000 with summer tourists) is an example of a sort of town now unusual in Britain.  In short, it has values groups but they are more mixed, still living less in separate bubbles than in many other areas.

Visitors and even locals recognize Wells as unusual, and ‘like something out of the 1950s’ (or 60s, 70s or … pick your reference point from the past).

Wells has about sixty local voluntary organizations, often makes its own entertainment, and is widely known for ‘community spirit’.  It’s friendly and has very little crime.  It’s the sort of place where if you walk down the street and people have seen you before a few times, they say hello.  Being a long-standing port it’s culturally a bit more open than inland Norfolk towns and villages and although it suffers badly from very high house prices and second homes, it still retains a fishing fleet and a lot of people live and work locally.  Wells Harbour Commissioners do their best to keep it a ‘working port’ and not let it just become a marina for recreational yachting.  Wells is almost entirely white, with many large families who have lived here for generations.

Although I’ve not run a survey, many of the residents and, although I’m a Pioneer many of my friends, are Settlers.  Of course there are Prospectors and Pioneers too (in What Makes People Tick: The Three Hidden Worlds of Settlers, Prospectors and Pioneers, although names have been changed, some of the stories are from Wells).   By English standards Wells is quite isolated with poor transport links, as local teenagers will attest.  It has limited choices for social activities, such as pubs but quite a lot of social activities which bring the population together, such as the RNLI (the voluntary lifeboat service), the voluntary fire crew, the summer Carnival, and the winter Christmas Tide.  People still mix here a lot more than they do in many other places: the ‘social elastic’ in Wells is still quite strong.

Yes, people in Wells self-select by values preferences and yes they have flat screen tv’s and broadband, go on foreign holidays and use social media but here at least it’s hard to overlook the reality that people who in many ways seem similar, are in fact quite different when it comes to ‘issues’, and politics and suchlike.  Sociologists might say it has a lot of ‘social capital’.  People in Wells might say that a lot of people know one another, which makes a difference.

Before you get carried away with the idea that Wells is some sort of paradise, it isn’t.  For a start the majority in my area voted Brexit.  One friend of mine even hoisted his own ‘Leave EU’ banner on the fishing shed but we are still friends.

Wells still has two state schools meaning local children (at least up to 16) and their parents get to know one another.  But more of the teachers now seem to send their own children to fee-paying private schools (mainly favoured by Prospectors) and a few (mainly Pioneer) parents opt for unconventional new choices like ‘free schools’, Steiner Schools and home education.  These encourage ‘bubbling’ as they create separate experiences.

Plus, Wells is becoming ‘gentrified’.  The pub where we used to spend most Saturday nights with a drunken mixture of teachers, care-workers, fishermen, clerks, shop workers and owners, builders and artists, as rock bands played and local ladies danced on the tables and sometimes fought, is now Prospector ‘Norfolk Coastal style’.  It caters for tourist families not fishermen, and to add class, in the summer it pays a lady to sing opera from the outside balcony.  That I regret.  Deeply.

In The Values Story of the Brexit Split (Part 1) I listed some factors which enable people with different values to nevertheless get along (Brexit being an example of where they did not).  It’s a crude list but it was:

Places like Wells provide low-bubble, weak-bubble or pre-bubble examples of how people can, by and large, get along, and not just by avoiding one another.  OK it did not stop a vote for Brexit here but that’s not the point.  The Brexit vote happened but it has not created noticeable fear or rancour.

One strategy for fixing destructive bubble-ization is to reinforce factors that enable people from different values groups to get along, for example social contacts, common experiences, and real-life things that make them need one another.  Limiting choice for example, in education and health, even though that goes against generations of political assumption.

At the same time, as technology and lifestyles change, we will also need to take proactive steps to try and combat the creation of destructively separate bubble lifestyles, even in places like Wells. 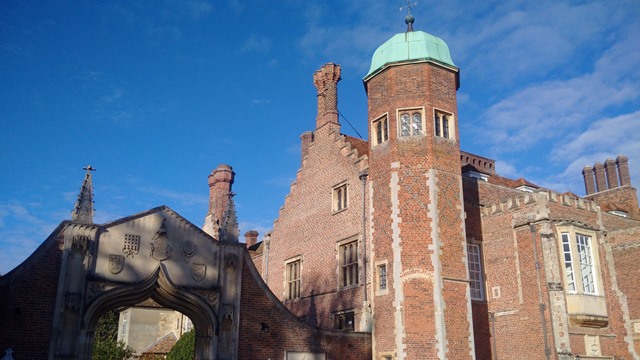 This past week I went back to Cambridge to give a talk on values to a postgraduate CISL course on Sustainable Business.  Afterwards, I spoke to two young CSR (Corporate Socail Responsibility) executives working for large and well known multinationals.

What, they wanted to know, did I make of the use of big data collection using psychographic algorithms, such as the use of Cambridge Analytica’s version of the OCEAN ‘Big 5’ model by Leave.EU and the Trump campaign ?  Was CDSM’s values model being used like this ?  And did the downsides of allowing values-worlds to develop as ever more separate values bubbles mean that stopping or reducing this should be, as one put it, “the new CSR for online companies such as Facebook and Google ?”

I confess I had never actually joined those dots before but yes, it now seems obvious that this is exactly what must happen.

Companies like Facebook and Google have significantly cleaned up their act on issues such as their climate change Carbon Footprint, with solar powered server farms for instance.  It’s surely time they and others in the communications supply chain also took responsibility for their Bubble Print.