Experiences and Encounters with Humanity – In Memory of Jon Castle

Experiences and Encounters with Humanity 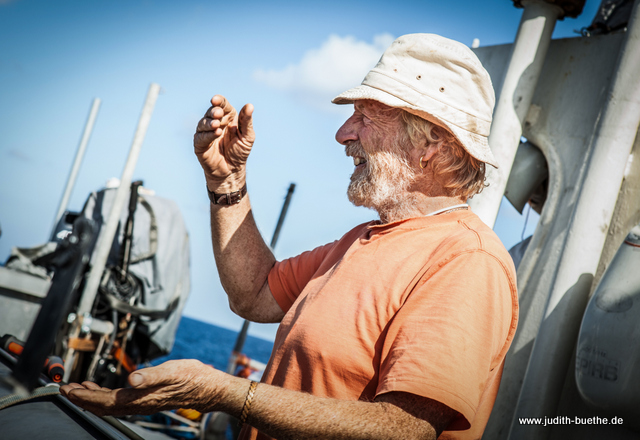 Jon Castle, captain of the rescue ship, briefing the crew for their next mission

Can we achieve it? Will we be strong enough for our own project? Does it even make sense to put yet another rescue ship into action when politics will put all kinds of obstacles in our path? How long will it take until we have collected enough money in order to finance a ship and rescue people? The person opposite me – Jon Castle – does not give any direct answer to the questions posed, that deal with the foundation of our own organization shortly before.

“Your ambition, your fear of failure? Or is it about the people you want to rescue from drowning in the Mediterranean Sea?“

I fall silent, thinking about his words.

Is it, after all, my own ego that it is about? I do not question the necessity of civil sea rescue. “You can doubt – you even ought to!” Jon says, and asks me to take a seat next to him.

We’ve made a good job! We’ve been there for the people who needed our help, we did our best. And we’ve experienced Europe’s disgrace out there. For us as a crew, the time has been very intensive. The missions I have taken part in were exhausting. Certainly one cannot judge the current political development. But should it keep you from going on or should it encourage you? That’s the crucial question you should be asking yourself!” 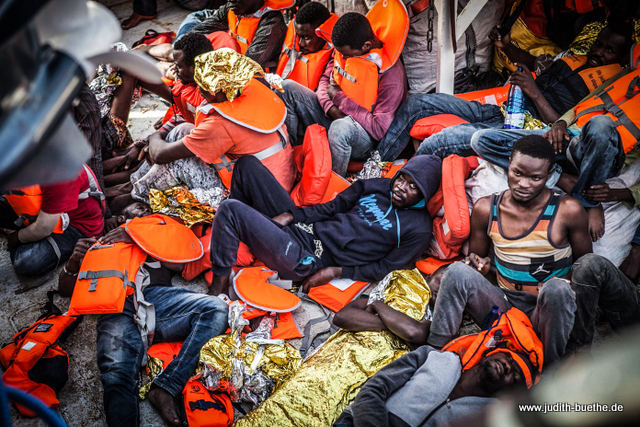 People rescued the day following an incident with the Libyan coastguard 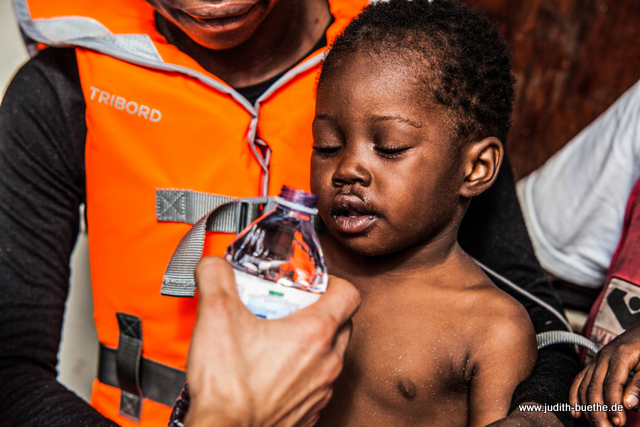 During the first rescue in October 2016 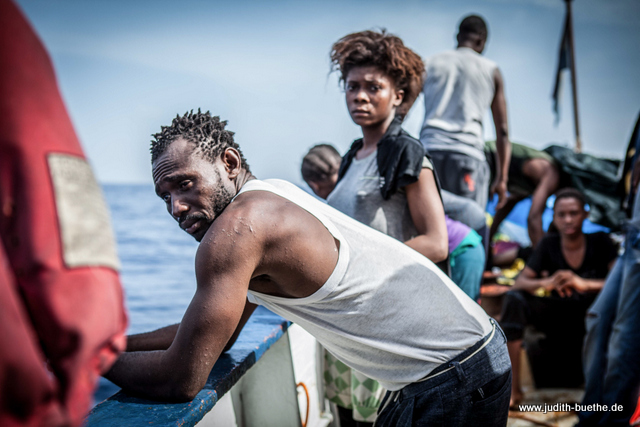 Couple who had been separated for seven months in Libya, reunited after rescue 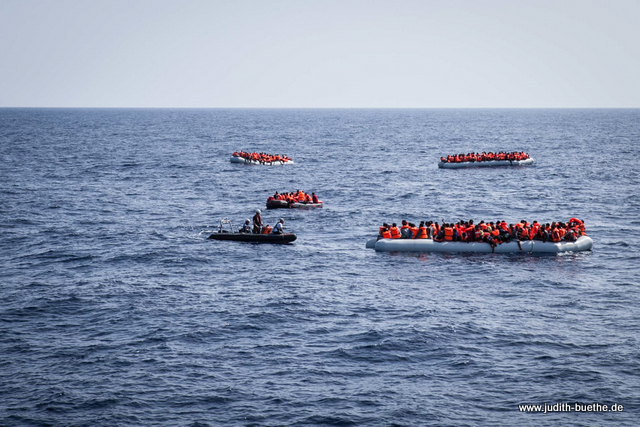 A day when eight boats of migrants were encountered 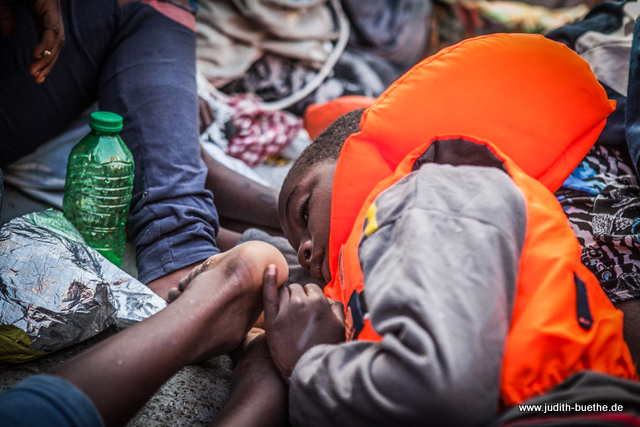 I think about the mission we were on together last year. As a volunteer I was lucky to be part of a crew of sixteen wonderful people among them Jon Castle, our captain. Tens of thousands of people were rescued by civil NGOs since the beginning of the catastrophe in the Mediterranean Sea. Where others look away, they see what is going on and get active for those who try to reach Europe in overcrowded rubber dinghy’s, in hope of a better future. According to official statistics of the IOM (Organization for Migration), since 2014 more than 15.000 people drowned in an attempt to flee across the Mediterranean. The estimated number of unreported cases is much higher. People who are not recovered dead are reported missing and hence are not included in the statistics.

You Mustn’t Give Up

“You mustn’t give up before you even tried. How will you know whether you would have been successful?” he cuts off my thoughts, squeezes my hand firmly and nods confidently. The scene of our first reunion is different – we exchanged Malta for the South of England, open sea for firm ground – the conversations, however, continue exactly where they stopped roughly twelve months earlier.

The spontaneity and arbitrariness of the events that overwhelmed us as a crew, the intensive experiences with which we were confronted, the emotional opposites were part of last year’s rescue mission. As human beings, it made us move closer together. In October 2016, when we worked together, we saw the misery and, still, we can hardly understand how many lives we have saved within two weeks’ time, how many bodies we recovered dead – others drowned before our eyes. In the course of time we were able to rescue 2.400 people and had to record 50 deaths. A good ratio? It is difficult to express a feeling in figures. With us were a captain and a team leader, both of whom held the group together, both addressed our individual concerns and feelings with heart and mind. 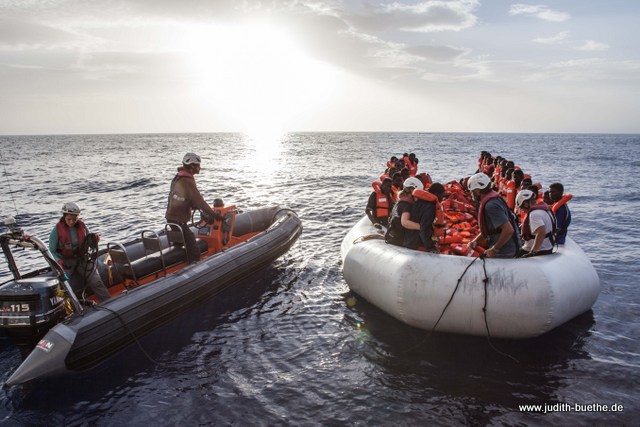 “Due to the extreme situation we were in, we were able to really get to know each other and to connect intensely – now there is a close bond between us all”, Jon turns his gaze away from me and watches a bird that discovered the bird-table in front of the window. He smiles. “Having met so many great and different people in all my years, this has touched me differently once more. The spirit was special because we worked together for these people. And this brings us back to the conversation we had on our last night in Malta: we humans are made to look after each other and work together.”

I am surprised that, after all this time, he recollects one of the many conversations I myself also remember well. 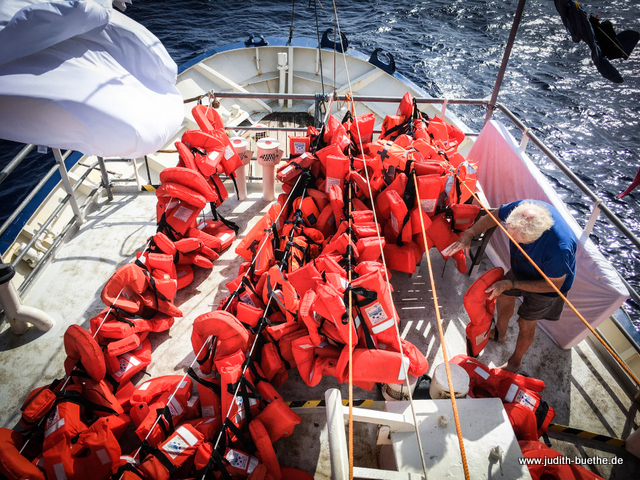 We talk about the current situation off the Libyan coast. I am angry because of the failure of the EU and, besides the good moments, frustrated by the lack of interest that we experience during our work for the organization. Jon interrupts me and offsets my excess of emotions with his objectivity – as far as I am concerned his unique characteristic in situations like this. “The situation as I see it is pretty muddled. I can understand that Italy is fed up with carrying the burden of the EU that works like a neoliberal capitalistic machine. There are people in Brussels who decide without any touch of humaneness, who have long lost their hearts and minds. The European Union is a great promise, but it isn’t an answer to serious topics like the refugee movement or the mass grave Mediterranean Sea.” His voice gets softer as he adds: “That’s why there are people like us, who understand that we can only function collectively and that things need to be tackled in order to change them.” 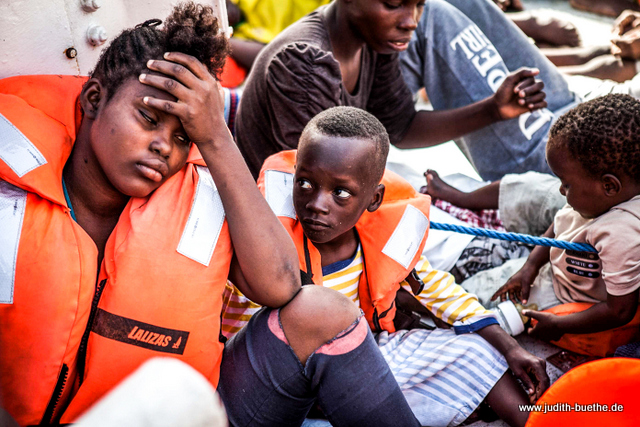 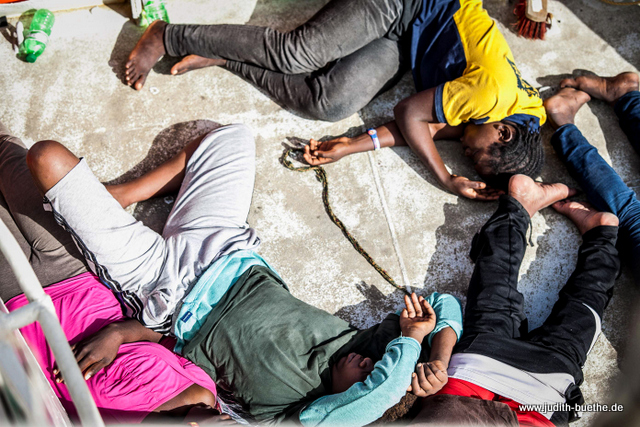 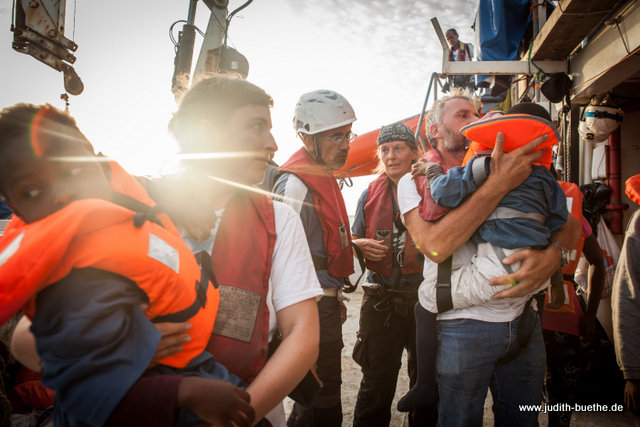 When we met on the bridge during rescue missions, our interaction was usually taciturn yet to the point. The clear dialogues were impressive – and pleasantly honest – which cannot be taken for granted, bearing in mind that Jon Castle, as our captain, was surrounded by constantly changing crews for several months, all of whom certainly keen on talking things through, just like we were. You notice quite soon how he steadily reflects thoughts, how important it is for him to question and understand what is going on. I quickly learned that he really listened and paid attention to the individual members of the crew – truly not a matter of course. 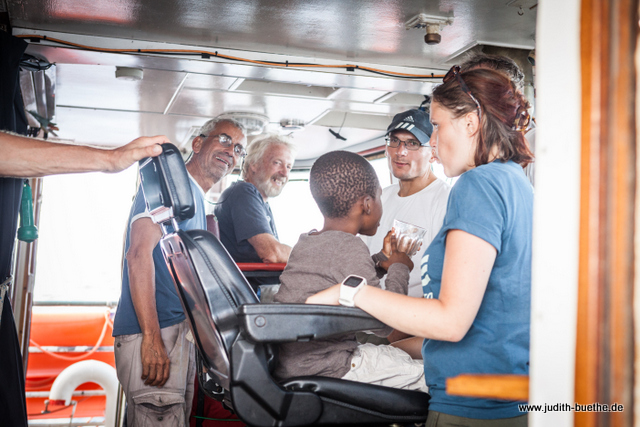 On the bridge during the last rescue

Back then we were talking about our lives outside the NGOs, our motives to go on search and rescue missions, his old crews and what he experienced, Libya and the part the EU plays in this construct. It was a heated debate – my counterpart genuinely furious. “Just recently I was reading about early British settlers in America”, he put down his tea next to him and looked at the people who held out exhaustedly on the outer deck since their rescue, waiting to be brought to a secure place. “Many white people went to live with the Native Americans at that time and they were accepted just like they were. They were given the opportunity to become part of the community and hence to lead a better life – without putting obstacles in their way!”

He apologized, left the bridge and turned to a young man from Nigeria who was amongst the people rescued and who apparently suffered from seasickness. Jon gave him some water, allocated a place to him with a view of the horizon and put his hand on the man’s shoulder – both were laughing together for a moment.

A couple of minutes later – Jon had returned to his place on the bridge – he continued the conversation: “It is crazy that the Native Americans of the time were much more open-minded than the Europeans of today, with their specially created image of solidarity and the community of values, are.” 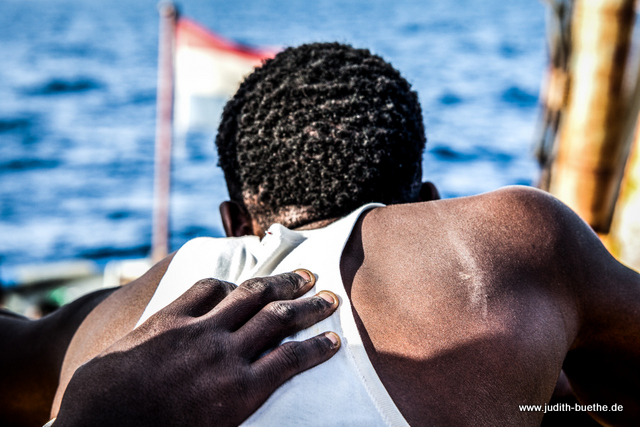 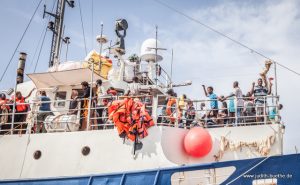 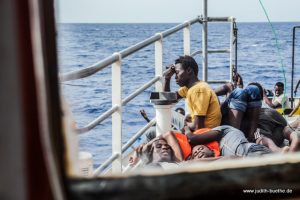 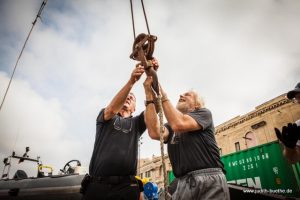 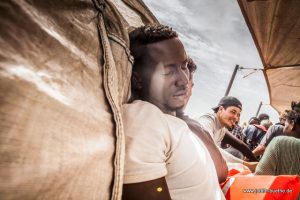 It was countless moments like this that had a lasting effect on me, as well as on many other young people over the past years. Human, loyal, emotional and idealistic. This can only be a small and reduced insight into his world – in which he allowed us a brief glimpse – a good world, if you ask me. Keep on shining! 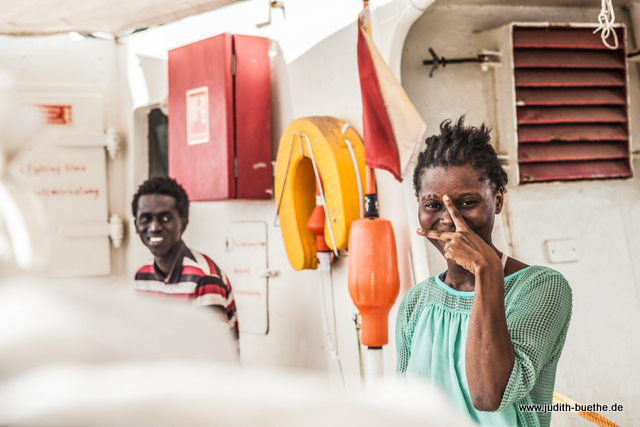 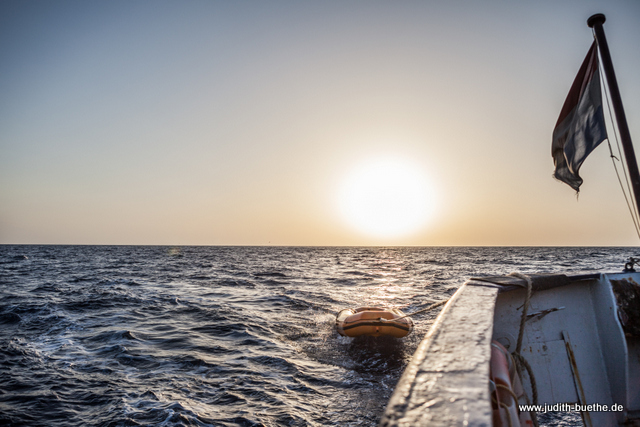 Photojournalist Judith Buethe remembers Jon Castle from their time spent on a civil search and rescue ship in the Mediterranean Sea off the coast of Libya in 2016.