He Had Our Back – Peter Melchett’s Contribution to Greenpeace

(This post first appeared at the blog ‘Celebrating Peter‘ where many other contributions can also be found). 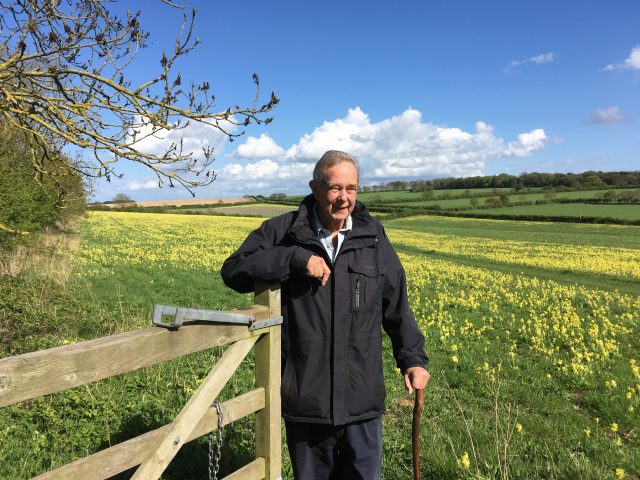 Peter on a walk round his farm in April this year.  Behind him is a field full of cowslips, part of a new wildlife habitat.

Peter Melchett, who was a Minister in the Northern Ireland office used to dealing with Ian Paisley across the conference table, was never going to be fazed by the 15 years he spent as chair and Executive Director of Greenpeace UK (1985 to 2001).  To supporters, politicians and media in the UK he is best remembered for his part in a white-suited action against GM maize but the greatest contribution he made to Greenpeace was as a leader, and most of that was invisible to the public gaze.

Once Peter put himself at the service of Greenpeace, although he continued to give speeches and interviews, his personal profile was far lower than it had been when he forged the alliance of environment and conservation groups as Wildlife Link and led many political and legislative battles for the environment in Parliament.

By the mid 1980s Greenpeace was already in transformation from a charismatic but chaotic entity often riven by personal rivalries, into an effective international campaign group but Peter guided its UK development into a resilient and stable campaigning machine, and professionalized and grew the organization at the same time.

He brought systems and organization, introducing specialist science, legal, accounts and political units, together with HR policies and management practices drawing on his previous experience in government and the third sector.   Although resented by some campaigners used to a more anarchic environment, he made these changes not just to treat the staff better and improve efficiency but to make Greenpeace harder to infiltrate or attack by government or corporates.

With a background in politics and a family background in business large and small, Peter understood power and influence in a way few other NGO campaigners or leaders did, then or now.  He knew that politicians might never win a popularity contest with Greenpeace, but could disable or sink it through stealthier means such as injunctions, asset seizures or subversion.  As its support grew, it posed a greater challenge to vested interests so the stakes got higher.

Largely un-noticed both inside and outside, Peter set about making Greenpeace’s UK ‘ship’ legally and financially watertight, with reserves to ride out headwinds.  On his watch, it invested in the expertise necessary to locate strategic targets that could change the trajectory of environmental outcomes, and then plan and run high-risk campaigns involving non-violent direct actions, with the optimal chance of living to fight another day.

He Had Our Back

Peter had a massive sense of duty and honour.  He took a personal interest in looking after the volunteers who physically and legally put themselves on the line when he often could not.  So he was always ready to take responsibility and lead from the front when the organisation came under fire.  “He made me feel safe”, said a director who served under him. “As a young campaigner”, an activist said “you knew whatever you did, he’d would support you in public: he had our back”.

Two Jewish friends who worked with me at Greenpeace say they used to call him a a ‘mensch’ – Yiddish – a man of integrity and honour.  “He was so solid, and reliable especially when the shit hit the fan – you could always count on Peter” says one.

In the 1980s he had already been involved in several demonstrations against nuclear weapons.  Just before his time at Greenpeace, he and partner Cass Wedd were arrested on a CND protest at Sculthorpe a USAF base not far from his farm in Norfolk.   It amused him that as he stepped forward to make his symbolic cut in the fence, plummy voice of Lady Olga Maitland (of ‘Women and Families for Defence’) rang out: “Peter, Peter, don’t do it. It’ll ruin your career!”

Once Chair and Executive Director, Peter rarely took a front-line part in Greenpeace actions, not because he didn’t want to but because he felt responsible for remaining available at the helm.  In 1999 he broke with this rule by leading an action to remove a GM maize crop.   A former criminologist, he spent a night in Norwich Jail.  I asked what it was like: “everyone was nice to me” he said, “anyway Eton prepares you for that sort of regime”.   Eventually a jury found all defendants not guilty of criminal damage, agreeing with Greenpeace’s defence of ‘lawful excuse’:  by destroying the crop they had stopped a greater harm of polluting other maize crops with GM pollen.

Peter could be obdurate and domineering as well as avuncular, self-deprecating and charming.  In the 1980s I once described him as more Grizzly than Teddy Bear.  He was also modest, for example rarely mentioning his time as a Minister in which he achieved changes which would have provided most people with a lifetime of stories to dine out on.  I think what drew him to Greenpeace was a combination of its potential to deliver results in terms of outcomes for causes he cared about – more or less Green and Peace – and its way of doing things.

For most people, its principles of non violence and bearing witness, inherited from or inspired by the Quakers in their early protests against nuclear testing in the pacific, were simply historical backdrop but for Peter they were lodestones used in in real-life, on a regular basis, and especially when faced with difficult and testing decisions.  As a personal bonus, in the UK this often meant cajoling, pushing or forcing a political and social Establishment deeply opposed to environmentalism, into change.  Greenpeace campaigns repeated the dynamic of that Olga Maitland moment, in which the establishment tried to stop Peter doing what he thought and felt was right, not just once or twice but over and over.  His principles made him a natural fit with the organisation’s hallmark tactics and worldview.

Peter said he left Westminster for NGOs because he was fed up with the “lying game”.  In 1995 after the successful Brent Spar campaign to stop Shell dumping a huge redundant oil storage facility at sea, his sense of honour put him and Greenpeace at the centre of a media firestorm fanned by government ministers enraged at Shell’s capitulation.   Just before Shell gave way, Peter had written to the UK Shell Board laying out Greenpeace’s case and including an estimate that the Spar might still contain thousands of tonnes of oil.   It then realised this was due to a misinterpreted sample from an inspection pipe and the likely figure was far less.  Peter wrote to Shell ‘apologizing’ for potentially misleading them. This apology was misused to attack Greenpeace about the campaign as a whole, which was never about the tonnage of oil on board but oil companies and the government wanting to reopen the debate about dumping waste at sea.

Although not personally to blame for the error, Peter took responsibility.  Earlier this year I talked to Peter and he recalled how he had been “hauled over the coals” by Jeremy Paxman on BBC’s Newsnight.  He said: “after we were off air – I wish this had been recorded – [Paxman] said to me, “I bet you regret telling the truth now don’t you ?”.   I was so gobsmacked, I couldn’t think of a snappy reply.  I mean he just assumed that everyone would normally lie about something like that, and to me it was just unthinkable that an NGO would lie”.

The same year, Greenpeace ‘invaded’ Sellafield and at Aldermaston blocked a pipe discharging radioactivity into the Thames.  Furious Defence Secretary Malcolm Rifkind sent MoD police to raid Greenpeace’s offices in search of evidence to charge activists with ‘conspiracy’.  Peter responded with an open letter in The Independent ‘J’accuse Malcolm Rifkind’ challenging the minister to come for him rather than ‘scapegoat’ individual activists.

Peter made Greenpeace UK more international, upping its contribution to international operations, and expanded its influence by using his vast network of contacts among more establishment NGOs.  His personal affability and confidence, and his experience of dealing with opponents face-to-face in politics in ways that avoided escalation of differences, were qualities that enabled him to sit down with Greenpeace’s opponents and often talk them into accepting an inevitable change in their ways after a campaign had peaked, rather than continue to opposing it.

When we did that die in in front of Downing street by the memorial where we were dressed in nuclear radiation suits [part of a campaign against THORP], Peter and I led the first group around the corner to the site from the House of Commons.  So we were walking at the front of about 30 people trying not to look suspicious when who should come round the corner but Tony Blair who stopped, greeted Peter and started chatting to him.  Everything – every group – was timed down to the last second so this was potentially a disaster.  Peter totally kept his cool and managed to politely get Tony to stop talking – seconds later we round the corner, get in position and put our suits on – it was very funny.

I worked closely with Peter as Programme Director responsible to the Board for ‘re-startegizing’ and creating the campaign programmes of Greenpeace UK, and then as his Deputy Executive Director, in the 1990s.  At this time power was shifting from governments to corporates and there was a new demand from the public for practical ‘solutions’ they could buy or adopt in everyday life.  Partly inspired by the example of Greenpeace in Germany, we added to the usual problem-driving element of campaigns, the engineering of solutions.  Today this sounds obvious but at the time it was controversial and counter-intuitive to many activists and environmental groups.

This often meant working with companies doing the right thing or at the least saying “this is a good thing”, and opposing those doing the ‘wrong thing’.  Peter gave businesses what they took to be an ‘establishment figure’ as an interlocutor and his pragmatism played a big role in helping extend the influence of the organization, for example through establishing Greenpeace Business, a newsletter which also ran conferences.  The approach of campaigns plus face to face engagement with corporate CEOs that he helped develop, has been continued and expanded by others in Greenpeace such as its current Executive Director in the UK, John Sauven.

Peter’s love of animals made him a lifelong  passionate anti-whaling campaigner, and played a role in his pursuit of organic farming.  After Greenpeace he returned to the fight against the impact of pesticides which he had first encountered in grey partridge studies on his family farm in Norfolk.  He and Cass were proud of having badgers return to the farm.  Apparently tireless, he was still working as Soil Association Policy Director, only days before he died.

Some people who inherit assets and position become philanthropists and support good causes.  Peter and Cass did indeed support projects with grants from their family Courtyard Trust but his greater contribution was to spend the capital of his inherited privilege (Eton, Cambridge, The Lords, High Office, family businesses, land) like a philanthropist giving away status and opportunity, to make a difference for the environment.  He was a great friend to me and a truly generous man.

(Thanks to current and former staff of Greenpeace for reminding me of things about Peter).