The main British political parties, Labour and Conservative, are large ‘broad-church’, ‘catch-all’, or ‘big tent’ parties.  They are now experiencing their first splintering based more on values cleavages than political ideology.  At the time of writing, eight Labour and three Conservative MPs have quit to form a block of ‘Independents’.  Both parties have broken because they have grounded on the rock of ‘Brexit’.

More MPs may or may not follow but thanks to the deep values-based schism created by the EU Referendum, it’s likely that the UK is seeing the start of a significant political realignment.  As the FT said today (20th February 2019), it means, ironically, that Britain’s politics are becoming more like those of Europe.

Here’s what’s going on in values terms, using the simple two-dimensional model of Ron Inglehart of the World Values Survey.  Instead of a one-dimensional political spectrum (as the House of Commons is literally built to accommodate), it’s two dimensional. 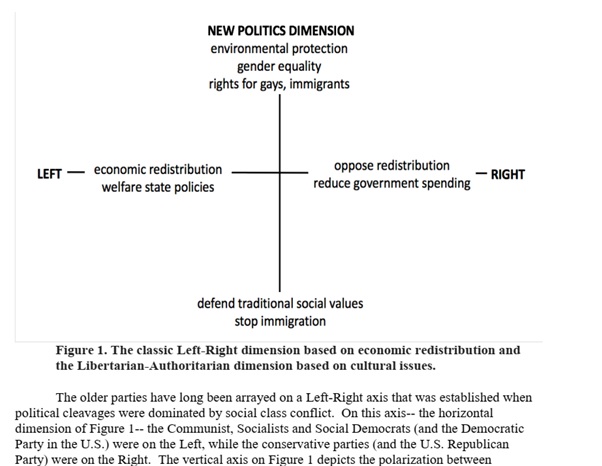 (From The Silent Revolution in Reverse, Inglehart et al 2018) 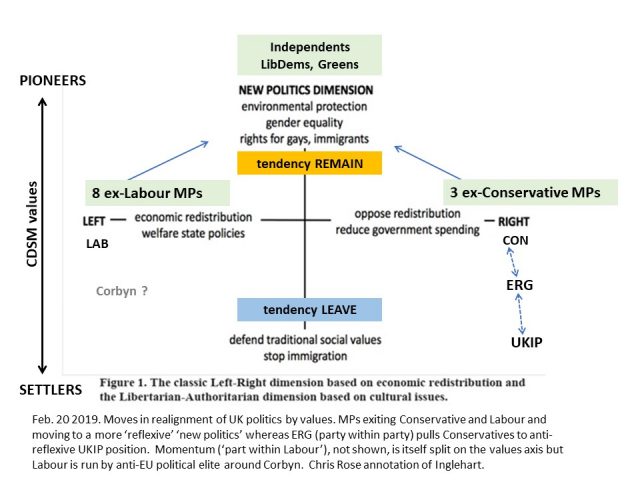 Here’s the same again with my own annotations.

For readers outside the UK, the reason these defections from Labour and Conservative are significant is that they could change the political arithmetic of ‘Brexit’ which is at a crucial stage.

The ERG (European Research Group) is a network of right-wing Eurosceptic and usually climate-sceptic MPs, founded in 1993 to fight against European integration.  The current Chairman is Jacob Rees Mogg MP.  A previous Chairman, Chris Heaton-Harris MP, played a central role in a campaign within the Conservatives to force then-Prime Minister David Cameron to abandon onshore wind farms, the cheapest form of renewable energy and regarded as crucial to decarbonization of the UK.  Heaton-Harris is a devotee of climate sceptic Bjorn Lomborg and now a  Minister in the Department for Exiting the European Union.

The ERG has been pulling the Conservatives rightwards and UKIP-wards and exploiting the values overlap between the extreme right voters for the Conservative Party and the anti-Europe pro-coal anti-wind, anti-immigration party UKIP, to do so.  Both renewable energy and the European Union are part of so-called ‘reflexive modernization’, new ways of doing things (eg sustainability) which Cameron tried to promote in his early phase of ‘detoxifying’ the Conservative Party.  He had to abandon that to stop the party splitting over Europe, and to retain his leadership.

The UK voted 48.1% Remain and 51.9% Leave in the 2016 Referendum (margin of 3.8%).  Legally that was only advisory but Cameron (who expected Remain to win) had pledged to act on the result.   He then resigned.  In Parliament the Conservatives and Labour are both split over Europe.  Since July 2017 a majority of the country have swung (increasingly) to be pro-Remain (analysis by the UK’s leading pollster here).  Most if not all the defecting MPs are in favour of a Second Vote, ie putting Brexit back to the people.  The polling shows a lead of 8-10% to Remain, and some of that is due to those who voted Leave changing their minds. 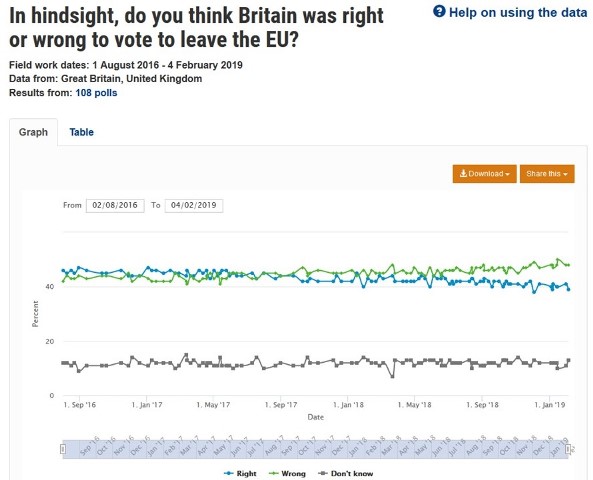 Above: a long running YouGov poll (from August 16 to 4 Feb 19) showing the progressively larger majority against leaving the EU, since July 2017.

This is the immediate reason why these defections are significant (and Theresa may has no majority in Parliament without support of the small Northern Irish DUP which is pro-Leave, although most people in Northern Ireland are pro-Remain). 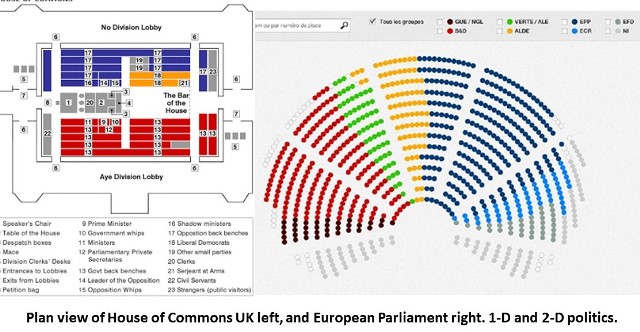 On 23 June the day of the EU Referendum I tweeted ‘#EUref if Britain votes Remain it will change the political culture. If Leave it will only change the political parties’.   By which I meant that a vote to Remain would be a vote for the future and modernity, and confirm the ‘reflexive’ changes such as towards a clean-tech and open culture, as ‘normal’ but a Leave vote would be a social throwback which would precipitate some sort of reconfiguration of politics.    The tweet was a bit trite perhaps but the underlying social factors driving a slow increase in the percentage of Pioneers with their ‘progressive’ values, have not gone away, and there is a huge skew to younger people favouring Remain.  Many of them assumed that Labour’s Jeremy Corbyn would turn out to be against Brexit but the opposite has proved to be the case.

In short although political change in the UK is a lagging indicator of social change not least because the first-past-the-post-system of geographical constituencies hugely favours and over-represents the two large ‘catch all’ parties, and so anchors most politicians in those parties for fear of losing their jobs, the slow but powerful current of values change will sooner or later prove an irresistible force.  The most dynamic expression of this in the UK right now is support for the school and student strikes over climate change, led almost entirely by young women, most too young to vote.  If it was possible to vote for @gretathunberg she would be likely to get elected.

That may encourage campaigners for ‘progressive’ causes but their greatest challenge in the coming years, and that of politicians who share their values, is going to be to find ways to design campaigns and politics which reaches across rather than entrenching values divides (see for instance why forced PCness is not a good strategy).  As Peter Lilla has argued, it is the politics of the common good, not of identity differences which we need, and that requires acceptance of values diversity.

For more on Brexit and evidence of the values split and dynamics see some of my blogs using the CDSM Cultural Dynamics Strategy and Marketing Values Modes model of Settlers, Prospectors and Pioneers:

‘Brexit Values Battle’ (March 2016) showed that security-driven Settlers in the UK, France, Italy and Germany shared a common dislike of the EU and immigration

Brexit Values Story Part 1’ (February 2017) –  my own story of how, it appeared to me, values had helped drive the politics of the Referendum result.  That drew on many sources (blog here, slides with main content here)

Brexit Values Story 2.1 (August 2017) with values maps and data on how people had voted in the 2017 General Election, comparing this with their Leave/Remain votes in 2016

And Inglehart et al (source of above diagram) using a similar values model but one that does not measure the Prospectors:  The Silent Revolution in Reverse: Trump and the Xenophobic Authoritarian Populist Parties(free pdf) and his 2018 bookCultural Evolution, and forthcoming with Pippa Norris (published already in the US) Cultural Backlash.