Tragedy or Scandal ? Strategies Of Extinction Rebellion and Greta Thunberg

The ‘new climate movement’ including the Green New Deal, Greta Thunberg,  #fridaysforfuture and the ‘school strikes’ and Extinction Rebellion now dominate media conversations about climate change, the climate crisis and the climate emergency.  What may their future hold, what have they achieved and can their efforts now align with those of more established actors to maximum effect ?

I’ve explored these questions in a paper which I’m afraid is rather long but which campaign strategists, climate campaigners and others involved in actively trying to address the climate crisis may find interesting:  Tragedy Or Scandal? Strategies Of GT, XR and the New Climate Movement (pdf) 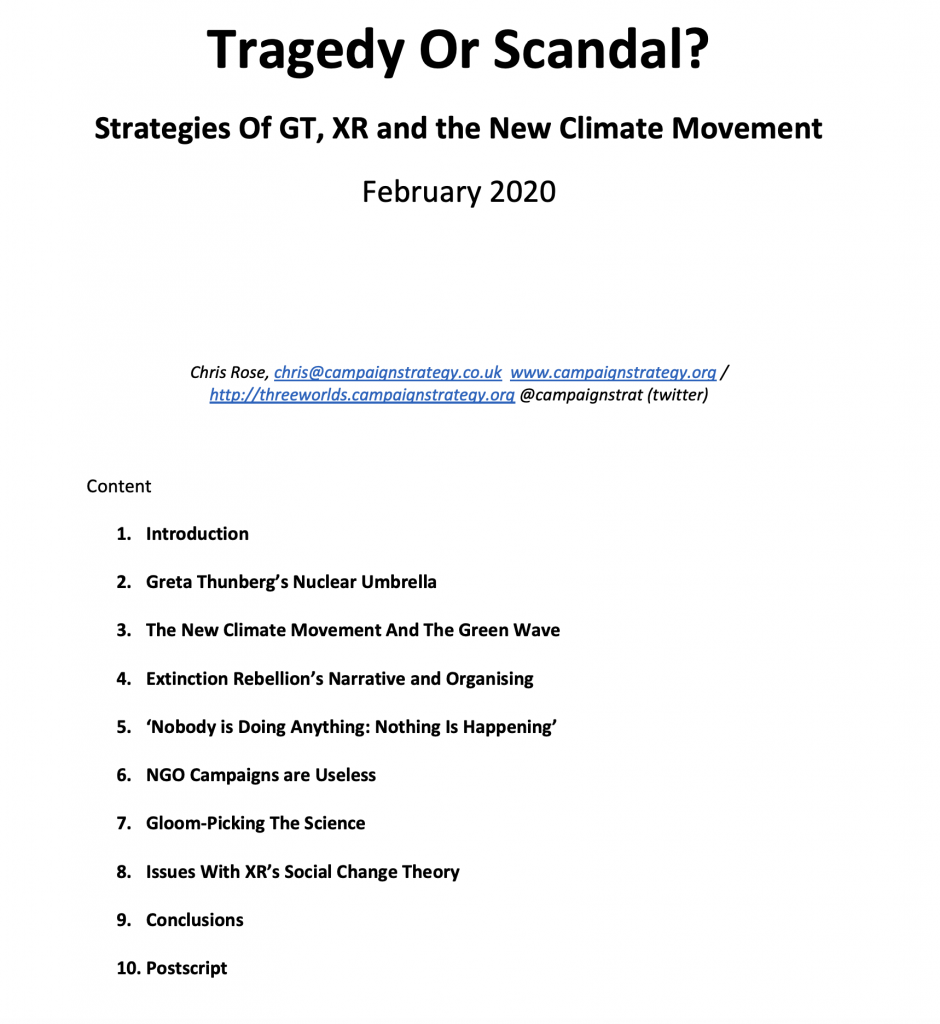 I’m one of millions, perhaps billions of people who admire what they have achieved and hope they will continue to find success, for it’s in all our interests that they do. But I also have questions and doubts about some of the strategies and tactics of Extinction Rebellion, and ‘XR UK’ in particular.  (For reasons of time and capacity and the fact that they are more straightforward, I’ve not focused on the Green New Deal initiatives, although they are extremely important.  My take on XR is also based on XR UK in 2018 and 2019, and may not apply to other parts of XR).

Some of the points I explore include:

Differences in the strategies and objectives between XR and ‘GT’ (including the school strikes).  Although many supporters may not realise it, XR has had revolutionary objectives (overthrow of government) and has adopted an ingenious but I think deeply flawed strategy of escalation of mass civil disobedience based on a probable mis-application of analysis of revolutionary movements in totalitarian regimes and dictatorships (the questionable ‘magical 3.5%’ participation), whereas it is actually operating in open democracies.  GT on the other hand has the more transparent objective of pressuring governments to adopt measures in line with achieving the Paris Agreement commitments to hold greenhouse gas emissions to levels consistent with 1.5 or 2C, by advocacy, school striking and protest.

The way both XR and GT have woven narratives that ‘nothing is being done’ and ‘nothing has worked’ whereas in fact there are many proven solutions to climate-changing pollution in the shape of technologies, policies and practices, it’s just that they have not been tried often enough and hard enough.  I argue that GT should retire these claims, and criticise XR in particular for systematic ‘solutions denial‘.

Denying solutions is not only not ‘telling the truth’ as XR urges on others but is ultimately counter-productive because it means GT and XR forgo the opportunity to force faster progress on governments and push out problems with solutions, by using the scandal dynamic.  If ‘nothing can be done’ then however awful the problem may be, it’s just a tragedy.  If it’s avoidable, it’s a scandal.  I argue that this is pivotal strategy issue and that working on such objectives from now on, could enable XR and GT to align their efforts with the larger established efforts of NGOs, greenish politicians, businesses and many others in civil society.

Bizarrely, solutions denial puts XR on the side of climate deniers who are also invariably active solutions-deniers.

XR has been systematic in misrepresenting what scientists are saying by editing out any hopeful parts of their papers in their presentations to potential recruits and to followers: it’s guilty of ‘gloom-picking‘ rather than ‘cherry-picking’ the science.  It has presented most science about right on the problem-driving side (and GT more so) although it has sometimes played fast and loose with attribution, for example not making clear the difference between speculation and science with a high degree of agreement, and has sometimes made things up.  These are un-necessary self-inflicted weaknesses which it should avoid.

Economic forms of rebellion and a focus on fossil fuel interests rather than just street-blocking actions could help XR in its revised strategy.  If it is to succeed it will need broad public support rather than just relying on a small vanguard of self-sacrificing activism.  Based on its trajectory in 2018 and 2019, XR UK runs the risk of dividing and polarising public opinion along values lines, re-opening the ‘Brexit’ values schism and potentially achieving stasis rather than rapid transitional change.

XR has deliberately encouraged and magnified gloom and climate-grief to up the emotional engagement of recruits and encourage them into committing arrestable actions.  In my view this approach is unethical as well as likely to fail but along the way it may also do real damage to people’s mental well-being, especially the young.

Because both XR and GT have reached and very successfully mobilised new audiences with little background in the climate issue, they are particularly vulnerable to the sort of cynical climate populism deployed by XR UK.  For example, it gives the impression that UK government policies have made no difference whereas carbon emissions have been falling since 1973, the UK’s carbon footprint is shrinking and electricity decarbonisation has been dramatic.  17 other industrial countries likewise have falling emissions.  In XR’s alternative reality this does not exist and this pretence will not help XR push governments into achieving more.  Blocking roads puts no direct pressure on inadequate climate policy.

In the UK XR has repeatedly dismissed the efforts of NGO campaigns and over-inflated its own achievements but in reality it is the direct beneficiary of 30 or more years of campaigning and change.  For example the university fossil fuel divestment campaigns and Friends of the Earth’s success in creating the UK Climate Change Act 2008.

The strange elements of XR’s strategy – encouraging grief, gloom-picking, solutions denial, not even encouraging its own followers to take any personal action to cut emissions, disruption apparently ‘for its’ own sake’, it’s cult-like branding, promotion of ‘sacrifice’, attempting to bully NGOs into promoting it’s objectives, and its opaque organising techniques – all make sense when they are designed to combine and cause revolution rather than just eliminate climate-changing emissions.  If it continues, XR runs the risk of ending up like the ill-fated UK ‘Committee of 100’ (opposed to nuclear weapons in the 1960s), which one insider said became “a public spectacle, a group isolated from the general body of public opinion and feeling”.

It seems to me that XR has effectively been sheltered from much scrutiny under the ’emotional nuclear umbrella’ provided by Greta Thunberg. It has just issued a new strategy but it is very general and silent on the key questions of what has changed and been dropped, and what it’s new ‘theory of change’ is, if there is one.   XR needs to clarify this.

Perhaps understandably (because the media also did this) XR has claimed to be the author of elevated public concern over the environment in the current ‘green wave’ but in reality that trend began before XR and GT’s campaign began in 2018 and is mainly a reaction to real world events, as was the previous 1988-91 green wave (which actually reached higher levels of concern).  All parts of the climate movement, old and new, need to ensure that they extract a better legacy from the current wave of opportunity than NGOs and others did in the previous green wave.

Finally, we need two things that XR ad GT cannot directly provide.  First, if the ‘climate culture change’ and mass engagement brought by the new climate movement is to bear fruit, the science community needs to give us a clearer vision of what can be achieved, after climate emissions are ended and drawdown from the atmosphere and biosphere begins.  We need to get at least of a vision of what light there may be ‘at the end of the tunnel‘.  Second, beyond protest type activism and focused campaigns, in countries like the UK, we need a complementary movement to optimise the potential of ‘household’ level expenditures. These include ‘big ticket’ consumer choices such as what type of house to build or buy, or cars and other transport choices, or heating systems, as well as day to day choices such as diet.  This is a largely untapped and undirected resource.

4 Responses to Tragedy or Scandal ? Strategies Of Extinction Rebellion and Greta Thunberg