Beyond Zero – No Heathrow #3 Plots New Course For Climate Policies 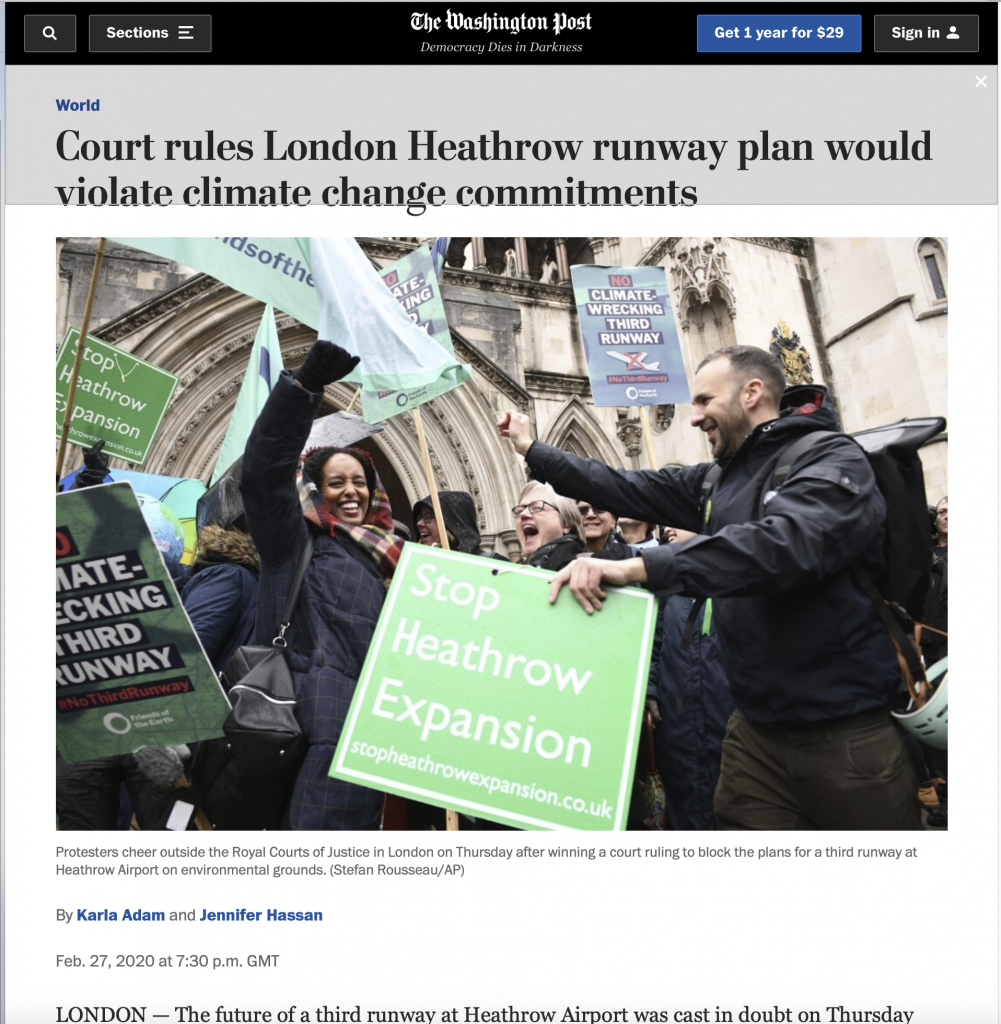 Today (27 Feb 2020) a decision by the UK’s ‘Court of Appeal’ found that the UK Government’s approval for expansion of flying capacity at Heathrow Airport through at third runway was illegal because of it’s failure to consider the meaning of the Paris agreement in climate change.

Essentially this happened because more runway capacity would mean more flights and more flights means more climate-changing ‘carbon pollution’ when the UK and other countries are committed to much less.  In the case of the UK and others, net zero by 2050.  This comes at a moment when, as many have pointed out, the “net zero” horizon has galvanised thinking on the practical steps needed to address the Climate Emergency.

In this case the technical problem is that commercial aircraft rely on high-crabon kerosene and there is no ready alternative in mass production.  Opponents of a Third Runway at LHR were rightly jubilant – the decision followed decades of opposition from groups like HACAN, Stop Heathrow Expansion, Plane Stupid, local authorities, local communities and London’s mayors, and no less than five judicial reviews (UK legal challenges), with a final challenge mounted by a group including Greenpeace, Friends Of The Earth, Plan B, and London Mayor Sadiq Khan.

Why Is This Significant ?

There are three reasons why this is important.

First, it shows that the Paris Agreement had legal practical consequences in a democracy held to account by an independent judiciary.  Anyone who thinks that government commitments have no useful consequence should consider this.

Second, it demonstrates how long-running, hard-grind campaigns are necessary to produce practical results with ground-breaking implications.  The recent activities of Extinction Rebellion and others have played a part but the war of attrition led by groups like HACAN have kept the game in play.  Which is why, as argued in a previous blog, all these groups need to organise to focus on strategic targets rather than hope that a self-starting bottom-up movement of lots of small actions against a diverse smorgasboard of particular climate hates, can lead to a coherent shift in direction.

Third, because by 2050 it is very possible that net-zero aviation fuels and technologies will be available, for politicians it opens up a new policy framing, of “Beyond Zero” policies.

In this case, meaning that in so far as climate emissions are concerned (notwithstanding other legitimate objections to Heathrow expansion, of which there are many), the option of a Third LHR Runway should be put in a box labelled “Post Zero”: not-to-be-opened until aviation is net carbon zero (or preferably True Zero).  That might be pre-2050 but until that is achieved, and flying is no longer a climate-threat, airport expansion should not be allowed a hearing, end of story.

For more – see these stories:

Standing outside the courthouse on Thursday in the rain, climate activist Zack Polanski said that those who had campaigned tirelessly for years to block expansion plans were jubilant but aware that there “is still much work to do.”

“The argument has to be loud and clear that we’re living in a climate emergency, and it must be no to all airport expansions,” Polanski said, adding that other governments around the world could learn from the ruling. “If you sign the Paris agreement, it has to mean something.”

Experts said the courts were effectively saying that, like it or not, domestic climate laws are real and need to be factored into policy decisions.

Friends of the Earth, one of the claimants in the case, said the ruling was a “ground-breaking result for climate justice and for future generations.”

The UK government’s decision to allow a third runway to be built at London’s Heathrow airport has been found to be illegal because of its failure to consider the Paris climate deal.

The court of appeal has ruled that the government’s plans for a third runway at Heathrow failed to consider the UK’s commitments to reduce carbon emissions under the Paris agreement. It’s the latest twist in a saga that has been rumbling on for well over 10 years. Every step of the way, Greenpeace and many other groups – including HACAN, Stop Heathrow Expansion, local authorities, local communities and London’s mayors – have sought to block a new runway.

So what does this new ruling mean for the third runway and the climate crisis?

In 2018, the government released the Airports National Policy Statement which explicitly backed a third runway at Heathrow airport. This was despite previous commitments from David Cameron when he was prime minister that there would be no third runway.

Campaign groups opposed to airport expansion – including Greenpeace – responded with a series of judicial reviews, no less than five of them. These challenged the decision on various grounds, such as air pollution, noise pollution and traffic increases.

These cases were initially dismissed by the high court. But today’s ruling comes from the court of appeal, which found that the government didn’t take into account its commitments under the global Paris agreement to reduce emissions. Paris of course being the agreement, currently between every country on earth, to dramatically reduce carbon emissions in order to keep global temperature increases below 1.5ºC.

This decision is monumental.

The future of Heathrow’s new runway is now uncertain after judges at the Court of Appeal ruled that the government must reconsider its support for a third runway because of the environmental impact. The Court of Appeal concluded that the former Secretary of State for Transport Chris Grayling failed to take account of the government’s commitments to tackling climate change when setting out support for the project in a National Policy Statement (NPS). The appeal was brought by a group of councils in London affected by the expansion, environmental charities including Greenpeace, Friends Of The Earth and Plan B, and London Mayor Sadiq Khan.

Lord Justice Lindblom told a packed court: “The Paris Agreement ought to have been taken into account by the Secretary of State in the preparation of the NPS and an explanation given as to how it was taken into account, but it was not.”

He said that, having seen the decision in advance, the Government did not oppose a declaration that the NPS was unlawful and has not sought permission to appeal to the Supreme Court.

The ruling means that current Transport Secretary Grant Shapps will have to review the NPS to ensure it accords with the Government’s commitments on climate change.

Heathrow Airport has said it will appeal the ruling in the Supreme Court.

John Sauven, executive director of Greenpeace UK, said: “Boris Johnson should now put Heathrow out of its misery and cancel the third runway once and for all. No ifs, no buts, no lies, no U-turns.”

John Stewart, who chairs anti-expansion group Hacan, said: “This ruling has killed off the third runway for good.

“Although it invites the Government to review its policy, I suspect that the current Prime Minister, Boris Johnson, doesn’t want to review the policy and will use this as a way of killing off the third runway.”