Every few years the motivational values researchers CDSM Cultural Dynamics Strategy and Marketing run a national survey to take a snapshot of values groups in the UK, broken out as 12 Values Modes and three large ‘Maslow Groups’, Settlers, Prospectors and Pioneers.  (For explanation and links to the many papers/blogs using this system at this website see here).

Pat Dade at CDSM has just shared some 2020 results with me, which I’ve summarised in this post.  ‘Values’ in this sense are linked sets of attitudes and beliefs which are deeply and largely unconsciously held to be true – how the world really is.  We see the world through them and they play a big role in how we interpret information, developments, opportunities etc.   They tend to change slowly, and numerous researchers such as Ron Inglehart in the World Values Survey, have tracked them changing across generations.

The current UK survey – conducted in early May in the midst of the covid epidemic – shows the proportion of Pioneers (Inner Directeds) and Prospectors (Outer Directeds) have both slightly increased since 2016, while the proportion of Settlers (Security Driven) have slightly decreased (this is a zero sum game – everyone is in just one of these Maslow Groups or the smaller Values Modes within them).

This continues the long term trend of the society becoming more Pioneer-ish as a gradually increasing proportion of the population meet their needs for safety, security and identity (hence individuals moving from Settler to Prospector), and for esteem (hence moving from Prospector to Pioneer), seen since 1973.  I’ve plotted the percentage of each ‘MG’ here, taking 1973 as year 1. 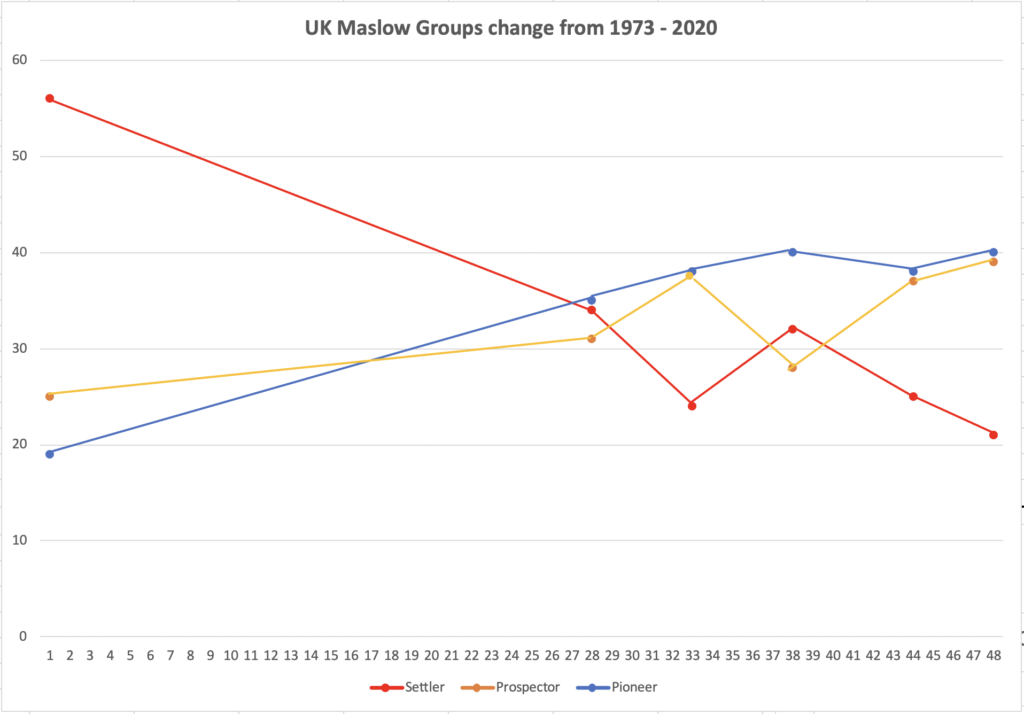 Students of values will notice that unlike the 2005-2010 dip in the number of Prospectors and the rise in Settlers, which was associated with the recession, so far there has been no such effect in 2020 but it is early days.  That ‘glitch’ in the ‘values conveyor’ led to a shrinking in the number of Now People, the optimistic high energy Prospector ‘leaders’ and a ‘pile-up’ of Golden Dreamers (the entry mode Prospectors), and consequent increase in Settlers not transitioning to Prospector.  The Settler>Prospector transition appeared to have restarted in earnest by 2016 and is now continuing.  From a social point of view that is good news (net ‘improving’ conditions).

From a political point of view it places even more importance on not forgetting the needs, psychological as much as material, of the Settlers, as was explored in my earlier blogs on Brexit (in which Settlers were much more strongly pro-Brexit than Prospectors (split) and Pioneers (mainly against it except for some more libertarian types).   However in attending to these needs, UK politicians of parties trying to reach across values in a way that represents Britain as a whole, must recognise that the values centre-of-gravity in the UK lies more to the Pioneer end of the values spectrum than the Settler end, and that’s not just true amongst the young.

If ‘the prospects for success’ start to dim in the next months and years, the Prospectors, normally not very ‘political’, will start to kick up, and they are 39% of the population.  A battleground for Starmer and Johnson.    Starmer has to recover lost Prospector and Settler support but in terms of an energetic and forward-looking optimistic Britain, his most useful VM allies will be the Transcenders and Now People. An interesting problem.

If it turns out that Brexit does not deliver for Settlers and the Golden Dreamer Prospectors (the latter were split on it), things could get quite bitter and despondent.  Dominic Cummings and other Leave campaigners played the Settler values pitch very well but he may have fatally blotted his copy-book by ‘saying one thing and doing the opposite’ over lockdown.  Breaking the rules, especially when they themselves have dutifully upheld them, is not something Settlers will easily forgive – it’s not honourable.

Politics aside, these values proportions show, as mentioned in my previous blog on Covid and campaigns, that although we’ve all been prioritising safety and security in response to the epidemic threat (ie adopting some of the main priorities of Settlers), that does not change our underlying motivational values.  (And as a very domestic UK aside, ‘clapping for the NHS’ got cross-values participation, whereas the VE Day celebrations pitched in jingoistic terms by the Johnson government, were a much more Settler-Golden Dreamer affair).  Values powerfully influence behaviours but you can’t reliably read values from behaviours because people may do the same thing for different reasons. 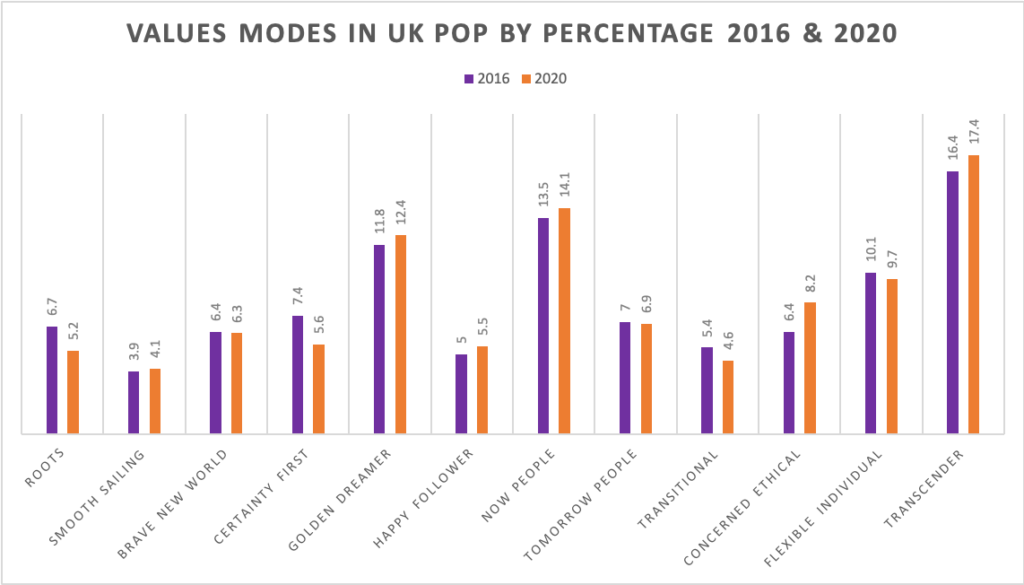 Here are the UK Values Modes proportions for 2016 and 2020 showing an increase in four of the ‘outside edge’ Values Modes (the more ‘values bothered’ ones from the values map), Golden Dreamer and Now People Prospectors, and Concerned Ethical and Transcender Pioneers.  This suggests values-driven national debate is likely to get louder rather than quieter.  UK VMs 2016 and 2020: 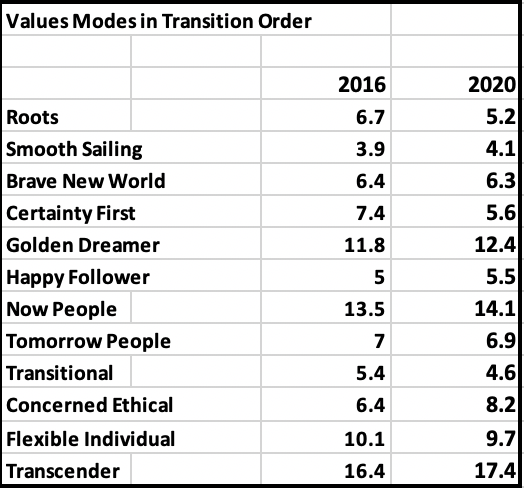 The numbers look more like the pre-crash of 2008 figures than anything since then. It appears that the resilience of the British population is alive and well. Not only have the values of the British population absorbed the structural change to the economy and political changes that followed – they also are becoming more likely to optimistic and open to new experiences than they are to be traumatized and anxious about change.

At CDSM we’ve often been asked over the past few months,  “are the Settlers increasing during the pandemic?”.  Our standard answer is that values don’t change for any one reason and real values shifts take between two and five years from start to finish, and multiple factors have to line up to create a crisis that initiates the change process.

In fact the most common way for the crisis to occur is for existing values-needs to be satisfied.  You are happy but begin to question ‘why?”.  In other words people usually begin their changes from a position of strength, not from a position want and need.

The other less common way people make values changes is when they are consistently unable to meet their dominant needs.  In this case they are beginning a transition from a point of weakness and unmet needs.  In values terms this can even result in Prospectors reverting to being Settlers.

In a short-term situation like the last three to six months we wouldn’t expect change. But the cultural reaction to Covid-19 is having an impact on various aspects of society: lockdowns, no work, new ways of being paid, death, fear of others, uncertainty about the future in multiple ways, etc..  These could increase the likelihood of an unhealthy change.

Years of austerity, a summer of global climate change activism, the final death throes of anti-Brexit demonstrations and the continuing merry-go-around of British governments are also the types of conditions that could trigger an avalanche of negativity and retrogressive values change. 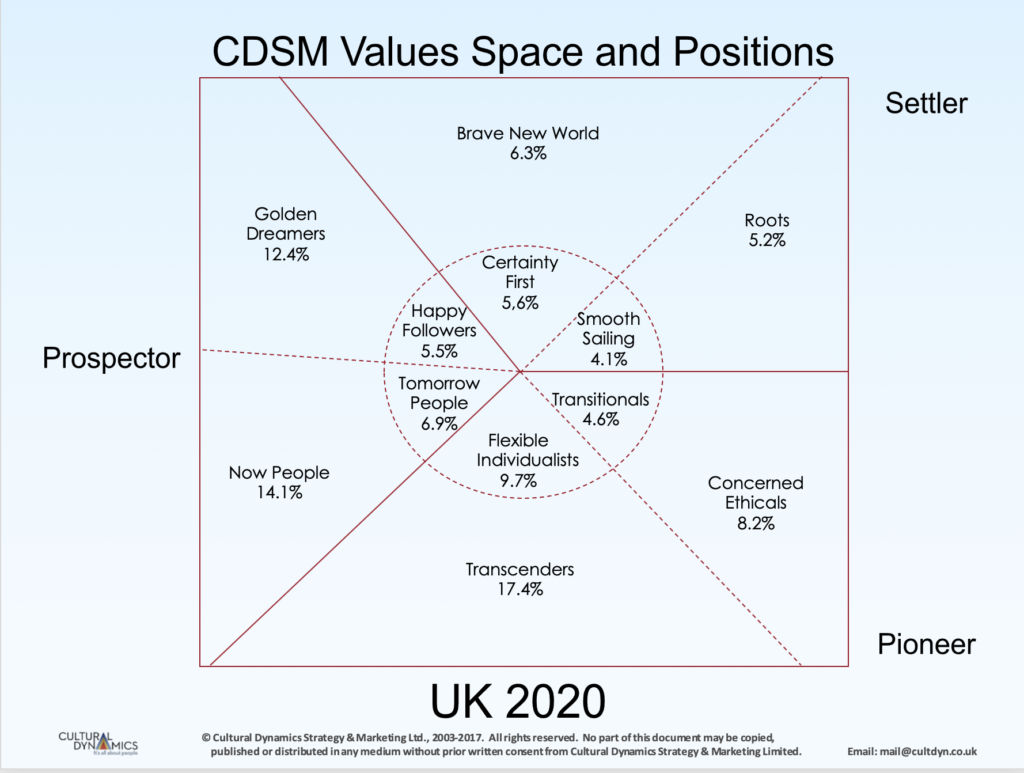 Thanks to CDSM for sharing these data. Thanks for Mike for pointing out a couple of labelling errors in the original post, now corrected