Too Much DAD Leads To DADA 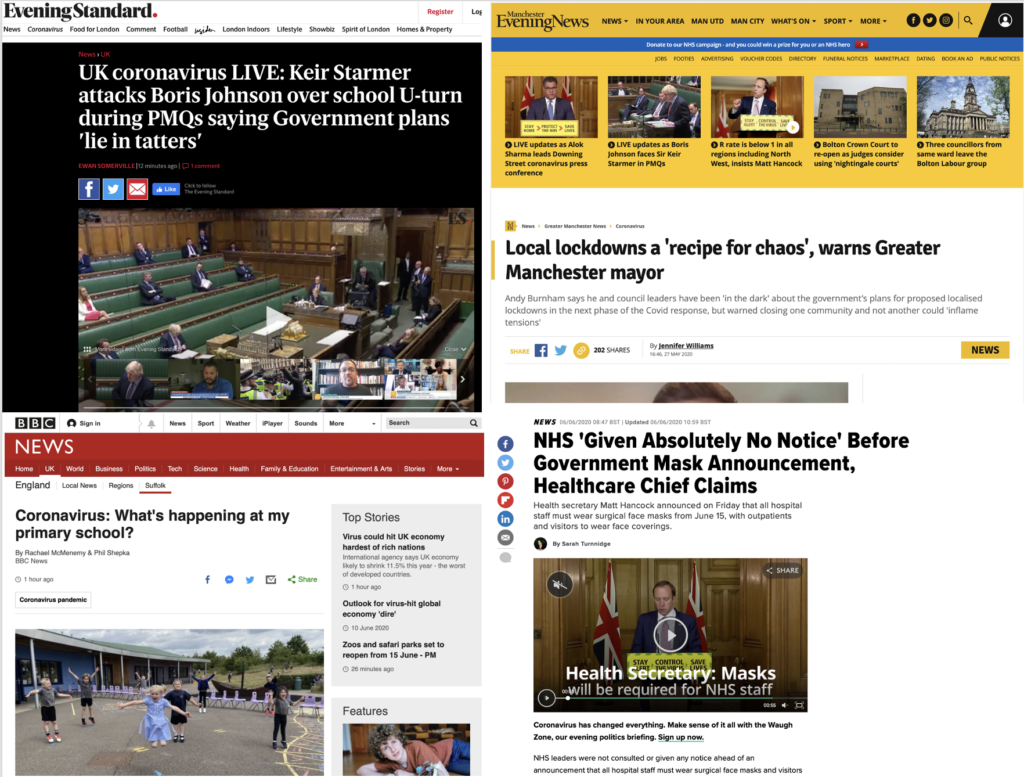 Too much Decide Announce Defend (Abandon)

The UK government, or to be more accurate the English Government which is the bit directly led by Boris Johnson with the advice of the propaganda specialist Dominic Cummings, continues to write the textbook of how not to handle a coronavirus crisis.  Communications failures are a central factor.

Two days ago the Daily Mail, normally a supporter of right-wing governments, reported

‘Boris Johnson’s government has the worst approval rating in the WORLD for its handling of the coronavirus pandemic – below even Donald Trump despite the US having the highest death toll’. 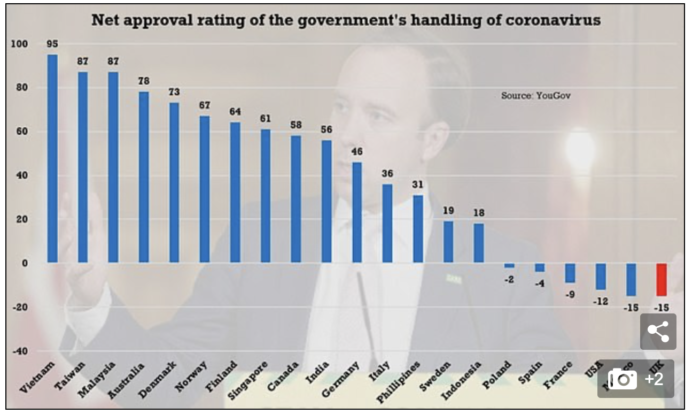 From the Daily Mail – based on a YouGov poll

The Johnson government has navigated the covid epidemic like a drunk in charge of a runaway car, in a series of crashes and u-turns.  On top of this it has failed to show any leadership in a massive public row over the Black Lives Matter-led campaign to remove the country’s numerous statues commemorating people who were slavers or who benefitted from the trade.

One cause of this incompetent performance is the Johnson-Cummings addiction to old-style Decide-Announce-Defend, or DAD.  As I explored in much more detail in this Newsletter back in 2010, DAD may have worked quite well in a Settler-dominated  society which respected or at least did not challenge ‘authority’, which was the case in the UK as late as the 1970s but it does not work in a society in which the majority are the more critical (evidence-demanding) Prospectors and the more questioning, involvement-seeking Pioneers (see previous blog).

The result is that DAD turns into DADA – or Decide Announce Defend Abandon, at the cost of credibility and public trust.  Under the last UK Labour administration there was a trend to seek ‘evidence-based’ policy and officials and Ministers gradually turned away from DAD because of communications evidence showing that it simply did not work, to more consultation and involvement.   Working for the Environment Agency on seeking public backing for flood policy and preparation, my suggestion at the time was to replace DADA with SCD – Share, Consult, Decide.  Another consultant running public engagement exercises pursued much the same thing but as EDD – Engage, Deliberate, Decide.

This is exactly what the Johnson government has not done in the Covid/Corona virus outbreak.  It has been secretive, not even wanting to reveal the names of its scientific advisers on ‘SAGE’ until forced into it by leaks to The Guardian, finally prompting a retired government Chief Scientist to set up a parallel open source version of SAGE. 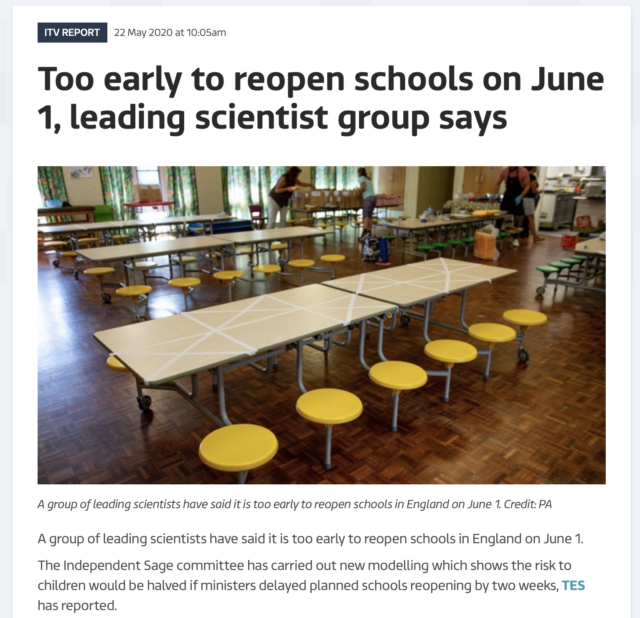 Secrecy around the covid SAGE experts committee may have been driven by a desire to control the media agenda but instead led to the establishment of an independent alternative and loss of control.  Here the Independent SAGE criticised a plan to re-open schools without adequate preparation and reduction of the disease – the government subsequently u-turned on the policy.

It lacks an evidence-based culture, treating science as a pick-and-chose prop to shore up its policies and perfering bluster, spin and constant resort to values dog-whistles to try and inflame support from it’s Settler base (Cummings’s speciality), and use of Lynton Crosby ‘dead-cat’ distraction tactics, as if it was still running the smoke-and-mirrors style Brexit campaign which brought together Johnson and Cummings.  But real-world governance is not like running an election or referendum campaign.

The government has managed to alienate most of those ‘on the ground’ charged with or left with trying to deliver its covid crisis policy, by making announcements about what will happen before telling them, and not involving them in making or testing policy. It has announced a policy of localised lockdowns without agreeing that with Local Authorities.  It has avoided engaging local Public Health experts and General Practice doctors and instead out-sourced testing and other key logistics to centralised commercial suppliers – with disastrous results.  It has announced policies on opening and then not re-opening schools without any meaningful consultation with teachers, and did the same with the police on rules, regulations and ambiguous ‘guidance’ on travel and lockdown terms (then broken by Cummings himself).

In the last week it suddenly announced that all hospital staff would need to use masks from a few days time without consulting NHS hospitals.  Today, amidst uproar about its latest schools u-turn it suddenly announced that zoos and safari parks would re-open, a move widely seen as an attempt at distraction by playing the animals and children card.   Meanwhile its own MPs are kicking up about a decision by Home Secreatry Priti Patel to impose a blanket two-week quarantine on all incoming air travellers, which flies in the face of all available evidence.  Even some Conservative commentators see that as an ‘anti-foreigner’ dog whistle from the Cummings stable.  Given the UK’s continuing high covid rate it would make more sense to quarantine people going out of the UK than coming in.  (Patel’s policy is being dismantled by the government bit by bit; given time, the zoos may yet yield their own fiasco).  And there are plenty of other examples. 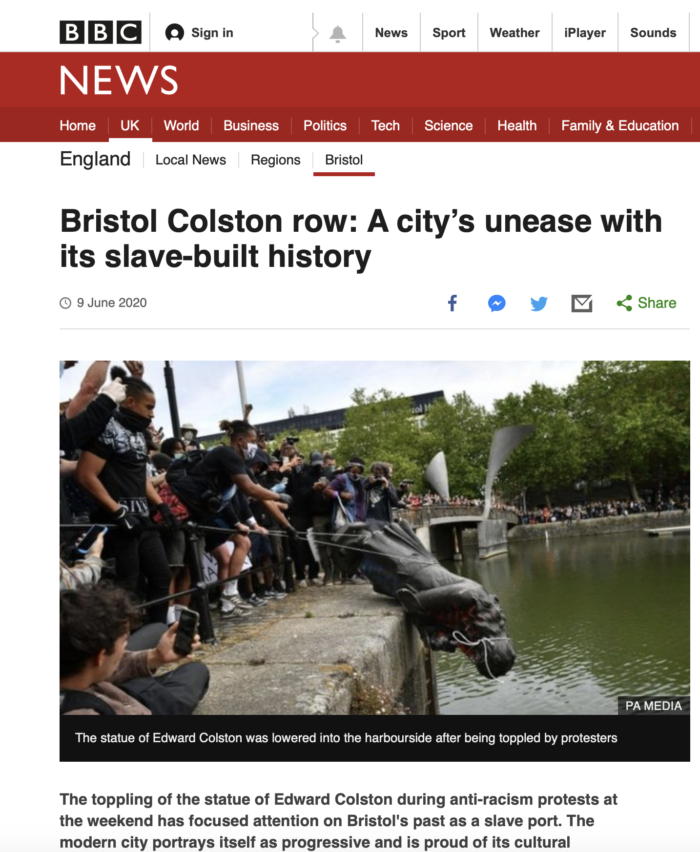 Meanwhile London Mayor Sadiq Khan took a step in the Share-Consult-Decide direction by announcing a review of all the ‘slaver’ statues in London, after the Black Lives Matter protests led first to the toppling of a statue of slave-trader Edward Colston in Bristol, and then the removal of a statue of Robert Milligan in London’s docklands.

The statue issue is of course a long-running one but re-ignited by the blowtorch of international outcry over the murder of George Floyd.  It has already provoked an avalanche of debate and position-taking about what should happen, who should decide, what should happen to the statues removed, what they should be replaced by if anything, and the pros and cons of the symbolism and the possible impact of the statues issue on the wider question of  practical action to reduce and eliminate racism in the UK.  Personally I’d favour putting them in an open-air history-of-slavery museum and replacing them with something decided on through public involvement.

Facilitating national debate on racism, slavery and our imperial past is an un-appetizing prospect for government as it promises at the very least, the prospect of a ‘logjam of violent agreement’ as people with different values agree on something that should be done but not why or how.  But it’s not something government can or should ignore.  Sadly, if Covid’s anything to go by, Johnson’s government looks unlikely to handle it well, and may start by trying to deflect it before making an ill thought-out announcement and having to abandon it.