The UK’s Invisible Victims Of Covid 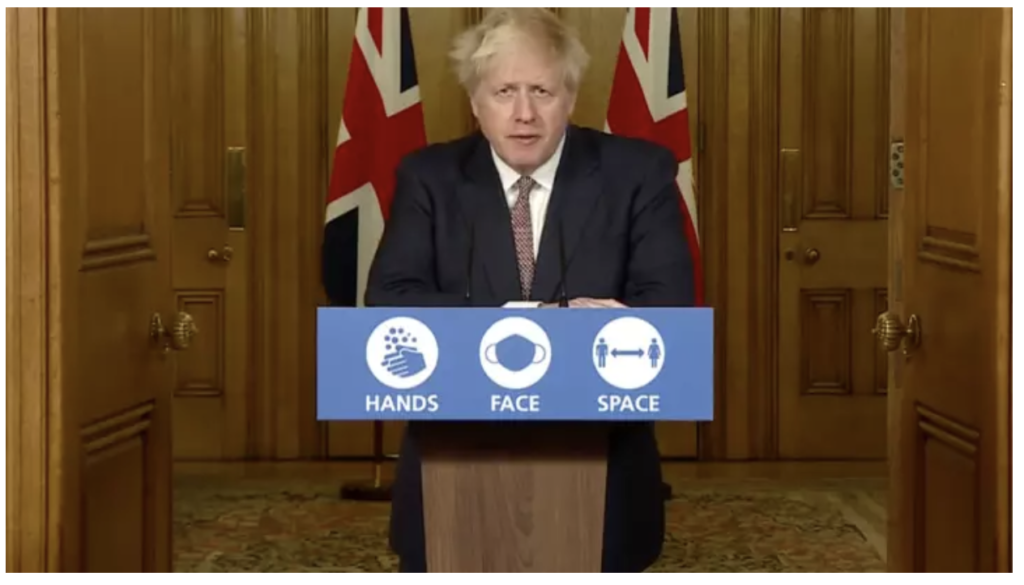 How do you get people to take covid seriously?  In England, that’s a question which pre-occupies many scientists, medics and politicians. They are fearful that festive Christmas drinks and family gatherings will lead to a re-escalation of the epidemic.

Prime Minister Boris Johnson is an obvious problem.  His ‘mixed messages’ populate an ever-enlarging case study of how not to do pro-precautionary communications.  His tone as much as his inconsistency is the problem.  He urges caution and justifies restrictions in one sentence while telling the nation that he, and they, are freedom loving libertarians in the next.  He seems unable to resist the urge to emotionally distance himself from the life-saving controls he announces, by saying how much he regrets them.  He says he thinks this is the right thing to do but his qualifications say he feels it is the wrong thing to do.

Another issue is the combination of presentations of Johnson and his government scientific advisers.  He deploys sub-Churchillian flowery rhetoric and Trumpian bombast as if he thinks he can bluster the virus into submission: a progressively less effective approach.  Then the Chief Medical Officer and Chief Scientific Adviser and their assistants deliver death-by-PowerPoint presentations filled with statistics, which then have to be summarised by journalists, by which time many of the public have switched off or zoned out.  Neither the English governments’ politicians or its scientists seem to have the capacity of Angela Merkel to calmly explain key scientific facts in a way which makes the policies make sense.

Today it was announced that NHS intends to make the vaccination case with ‘sensible celebrities’ as messengers.  Not a bad idea, although it’s debatable whether it helps to share the strategy as opposed to the content, and probably reminds us about Johnson who obviously wouldn’t pass the audition.

You could fill a communications strategy book with could-have-done-better illustrations drawn from the Johnson Government’s handling of the epidemic but some of the might-be-better next steps are hiding in plain sight.  During the first wave ‘lockdown’ the ‘clap for carers’ became a weekly public ritual on streets across the UK, after it was started by Annemarie Plas, a Dutch national living in south London.  It focused attention on something that the statistics lack: empathetic victims, in the shape of health workers.  And it was mobile phone videos shared by exhausted Italian doctors and nurses and repeated in media interviews, that first convinced the British that coronavirus was not “just like the ‘flu”.

Communicators should hardly need reminding that Joseph Stalin once said “One death is a tragedy; a million is a statistic” but simply repeating, as England’s Ministers do relentlessly, that ‘every death is a tragedy’, reinforces rather than avoids this problem.

In the UK at least, these difficulties are compounded by the fact that the deaths are largely invisible.  Funerals are themselves constrained by the need to limit gatherings to stop more lives being lost, deleting the emotional impact that surely would be felt, if they were larger and more visible.  My suggestion is that England needs to find a way to make this reality more visible, and to do so before it is too late to have a beneficial effect on this epidemic.

Some years ago I met a man who attended a training event I worked at, who was trying to raise funds for armed services charities.  What could they do, he asked, to overcome public reluctance to engage with them because many individuals were against the wars they were sent to fight in – such as Iraq and Afghanistan. For many, soldiers and airmen and women were not empathetic figures.

This, together with official reluctance to allow members of the armed forces to wear their uniforms off-duty because of terror attacks, meant that the services were effectively invisible except when seen fighting on the tv news. I suggested that they make the families visible, who were, after all, the people they were trying to help.  I don’t know what happened to that charity but what changed the social picture was what happened in the small English market town of Wootton Bassett. 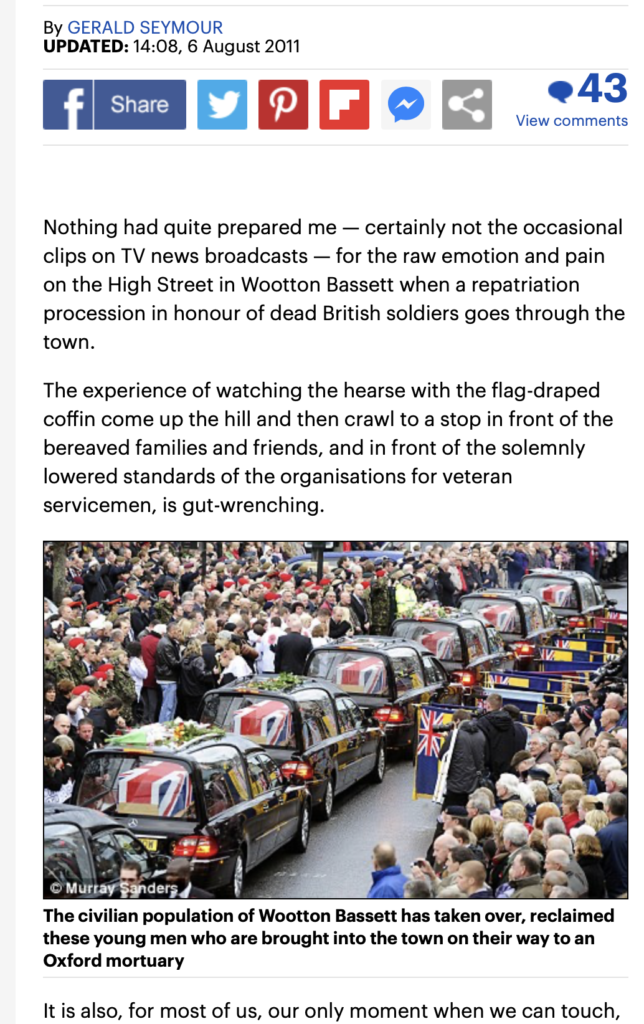 From the Daily Mail

By an accident of geography, military fatalities were landed at an airfield the near the town and then taken in hearses to an Oxford mortuary for post-mortem.  Draped in flags, the passing coffins became the focus of spontaneous shows of respect by towns people, and that grew into a local and then (through media), a national phenomenon of grief and respect.  When the airbase closed and the coffins were landed elsewhere and took a different route, there was controversy. (Read this brilliant account in the Daily Mail from 2011). But by that time, in my view at least, the Wootton Bassett experiences had done their work and rebuilt an emotional link between ordinary members of the public and ordinary individual service women and men, and their families, whatever they thought about the politics of the wars.

Sensibly, so far as I know, no politicians or senior military ever appeared at the events in Wootton Bassett.

I’m not suggesting processions of hearses of covid victims.  Only that visual social signals of the reality of covid’s impact are a missing ingredient.

People who died in road accidents are often commemorated by friends and relatives tying ribbons and flowers around at tree near the site of the accident.  Yellow ribbons have been used to signify emotional connection to a very wide range of causes around the world.  Those who have gone missing or become casualties have also been signified in many other ways: Amnesty International for example has used empty shoes to symbolise the ‘disappeared’, and others have adopted that to represent other victims. 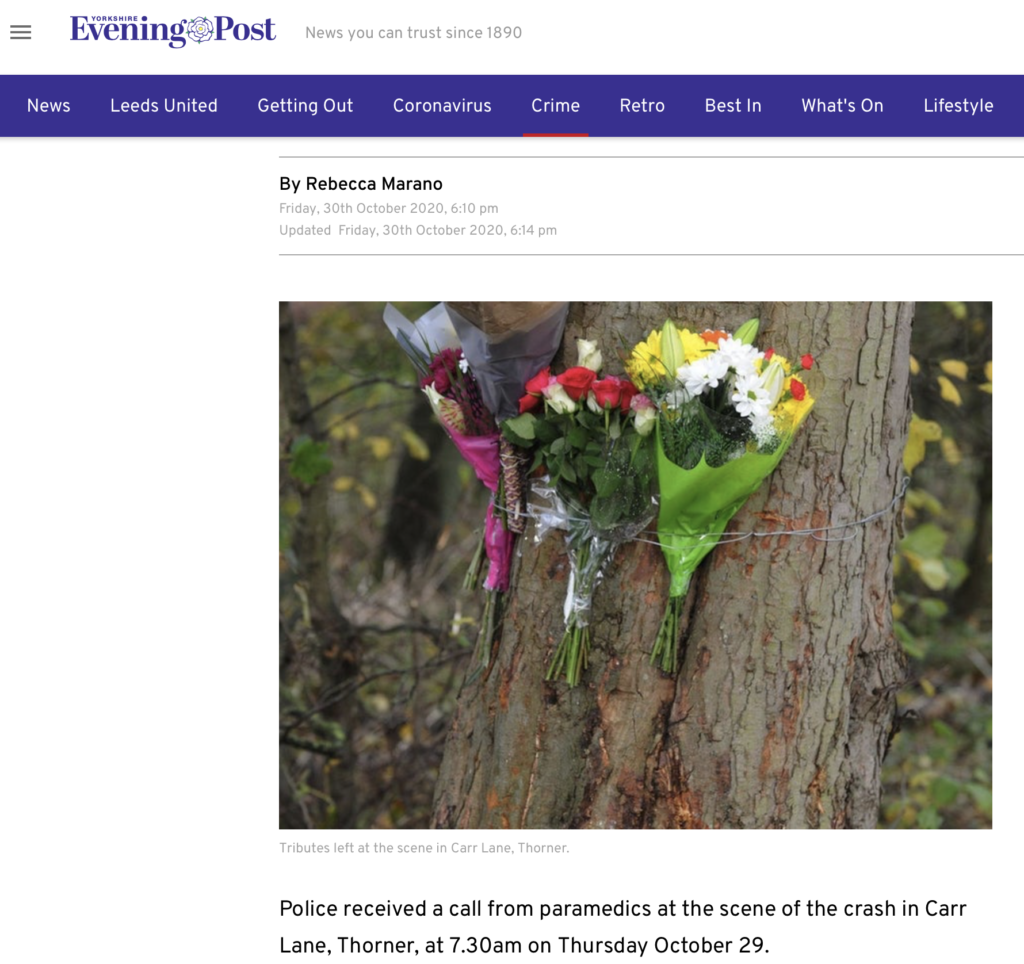 The thank you ‘clap’ for health workers came from the people (and wasn’t restricted to the UK).  Some sort of authentic local sign that covid is taking friends and relatives might have a similar impact.