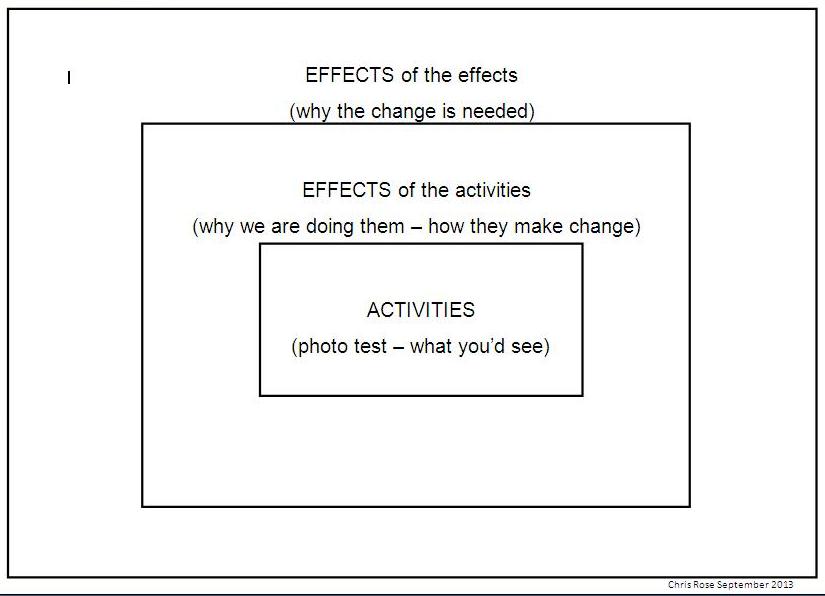 Here’s an uber-simple campaign planner that might be of use.  I made it for working with  a client who was trying to compare proposals for a ‘major campaign’ but it seems to work in a lot of situations. For example when you want to:

The inside box is what you’d see in the campaign. What you’d see happening.  Real stuff – apply the photo test.  Can you take a picture.  If not, it’s not real.  Real things which can involve real people can be put into testing, eg focus groups, or presented to potential “engagement” or “mobilisation” targets.  By and large Settlers and Prospectors mainly focus on the real things – the “little picture”.  Start here with them (and probably stay here, or at least return here).  These are the activities.

The next box, the ‘connector’ is the effect of the activities.  Why we do them.  This is where your critical path comes in (if you are good), or your theory of change (if you are theoretical …).  At any event it’s why you’re asking people to do the activities.  Or asking them to get others to do so.  But only rarely is it a good idea to make this your selling point for the activities, on its own.  Eg as John Scott put it to me “confectioners don’t say ‘buy this chocolate bar because we’ve had a worrying dip in sales of chocolate recently …'”.

Finally on the outside are all those reasons why we need to get that change.  Aims, “goals”, missions etc.   Save the planet, make the world a better place, and so forth.  Pioneers love this big picture stuff.  But most other people don’t.  And on its own, it’s not a campaign.

Tip: draw stick man or cartoony pictures in, starting in the middle. It’s quicker and better than words.  Use bubbles and ” ” marks where you need to add words.  Go on until the paper is full, then stop.