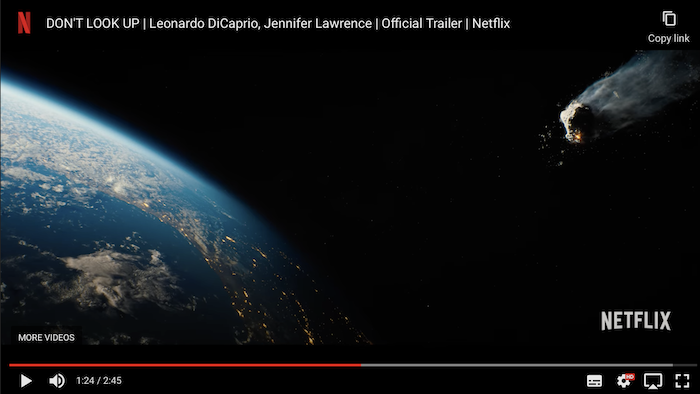 Have you seen Adam McKay’s ‘Don’t Look Up’, a satirical story about what happens when a ‘planet-killing’ asteroid is discovered to be on a collision course with earth?  If not, I recommend it to campaigners, if only because it might become a widespread cultural reference point for climate change, without climate change ever getting a mention in the film. 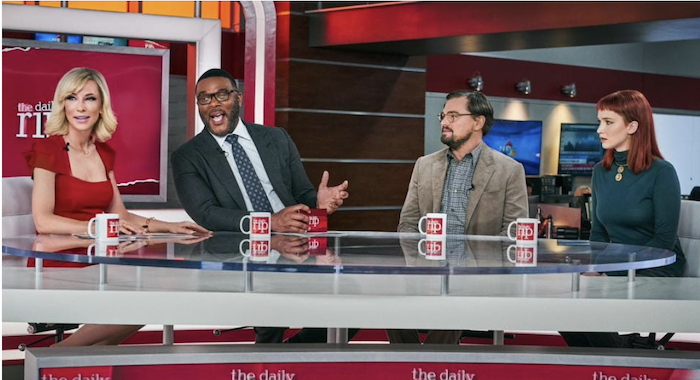 With an A-list cast, the film parallels many of the stages of human reaction following the scientific ‘discovery’ of human induced climate change in the 1980s, including denial, obfuscation, prevarication, political and commercial exploitation and so on, right up to today’s billionaire dreams of escape into space.

Stripped of the asteroid plot flesh, the narrative skeleton of Don’t Look Up is a potted history of climate change in terms of motivated reasoning in the political and media response to climate science.    That makes it very different from previous attempts to take climate change to the big screen, by either attempting to explain the science or bring to life one or another possible future.  It seems to me that Don’t Look Up has the potential to make a real difference but first, a recap.

The Scientists: “This Is Our Story!” 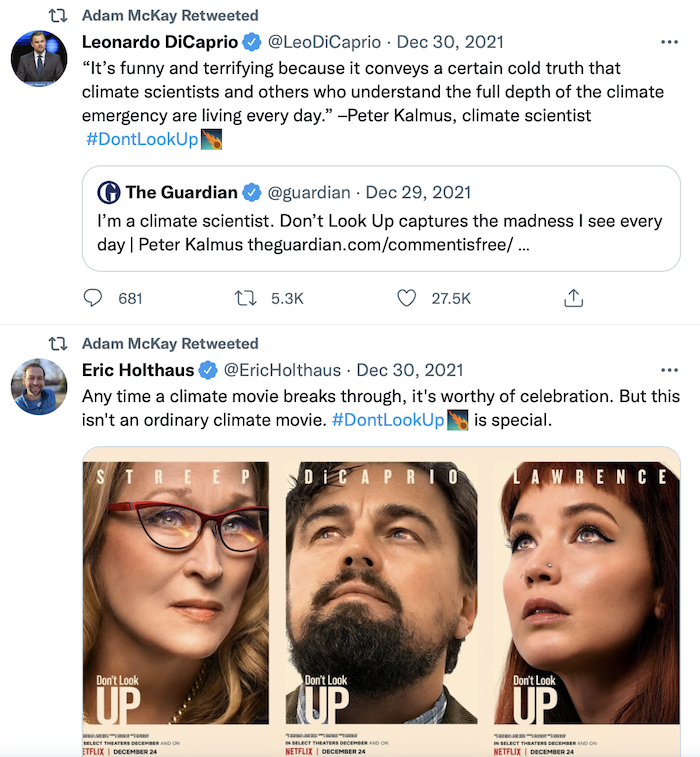 After a limited theatrical release in the US on 10 December the film appeared on Netflix on 24 December where it has since been the most watched movie.  Movie critics described it as a black-comedy, a disaster movie, science fiction, comedy or satire.  Some panned it (see below) but climate scientists and campaigners have loved it.

The first effect it had on me was that it brought back that horrible feeling you get when it suddenly dawns on you that humanity faces a huge threat which most others are blissfully unaware of:  a sensation I remember having more than once as a campaigner, and then immediately feeling “we must do something about this but how?”  The second was to think if that’s how it affected me, then this really is about others who have spent almost the whole of their working life struggling to convince others to act on the ‘climate science’. I tweeted:

Soon a succession of social media posts and articles showed a growing number of scientists and campaigners recognizing it as a pretty faithful analogue of their own experience in trying to get society to respond to ‘the climate science’.

No surprise because as it turns out, Director Adam McKay and collaborator David Sirota were motivated to make Don’t Look Up by through frustration with the lack of media and political attention given to the climate crisis, and McKay spent a lot of time talking to climate scientists about their perspectives in order to write the film.

“I started talking to a lot of [climate] scientists. I kept looking for good news, and I never got it. Everything I was hearing was worse than what I was hearing on the mainstream media. So I was talking to [David Sirota, who asked him to write the film], and we were both just like, “can you believe that this isn’t being covered in the media? That it’s being pushed to the end of the story? That there’s no headlines?” And Sirota just offhandedly said, “it’s like a comet is heading to Earth and it’s going to destroy us all and no one cares.” And I was like, “that’s the idea!” 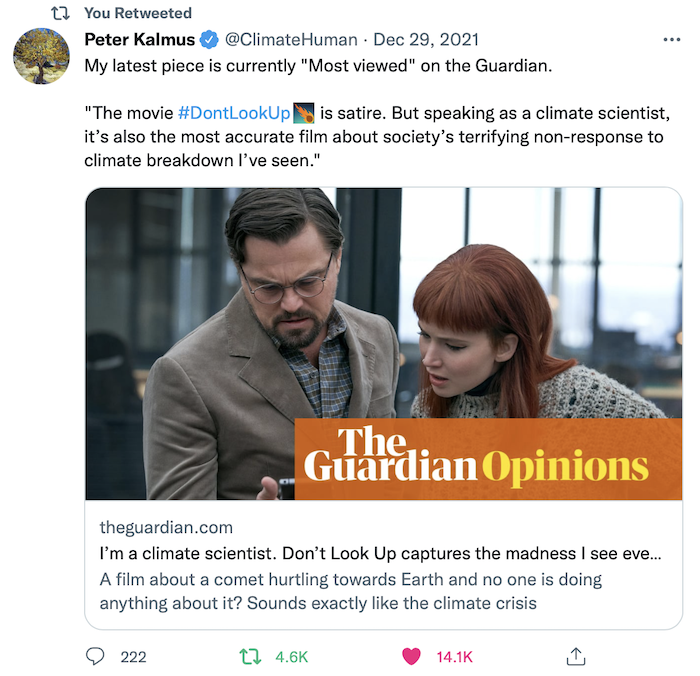 Author of the New Climate War climate scientist Michael Mann took to the columns of The Boston Globe and twitter to promote the film and was credited with being the inspiration for Leonardo di Caprio’s astronomer character, Randall Mindy.  On 29 December another climate scientist, Peter Klamus, wrote in The Guardian that it’s ‘the most accurate film about society’s terrifying non-response to climate breakdown I’ve seen’. 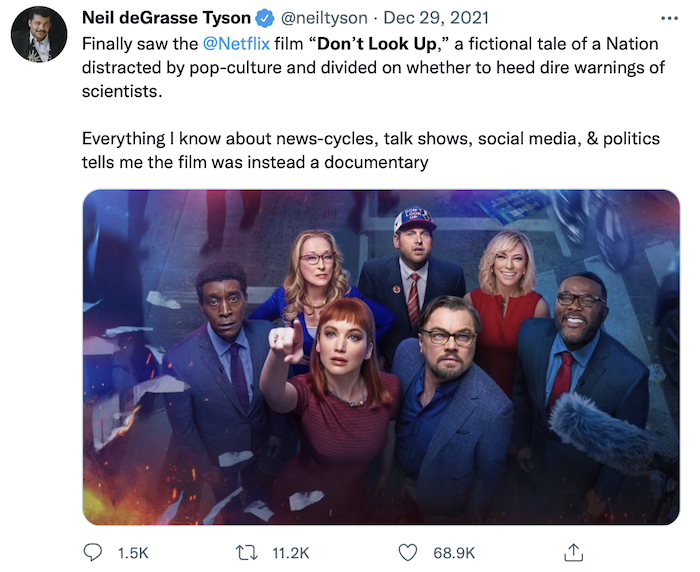 (@neiltyson is an astrophysicist)

What The Reviews Said

Reviews were ‘mixed’. Many of those most cross about the film took issue with it because they did not think, or could see how it would ‘make a difference’.  So although entangled with their views about the film-making technique, professional reviewers became amateur political scientists and campaigners.

On 8 December 2021 The Guardian title a review, ‘Slapstick Apocalypse According To DiCaprio and Lawrence …’ and the reviewer (on my browser it has appeared under two different names) wrote

‘Adam McKay’s laboured, self-conscious and unrelaxed satire Don’t Look Up is like a 145-minute Saturday Night Live sketch with neither the brilliant comedy of Succession, which McKay co-produces, nor the seriousness that the subject might otherwise require. It is as if the sheer unthinkability of the crisis can only be contained and represented in self-aware slapstick mode ..”

and so it went on, although it did end with: ‘… But if the movie helps to do something about climate change, such critical objections are unimportant’.

‘It’s hard to think about who, exactly, is going to be moved to make changes to how they live their lives by Don’t Look Up, a climate-change allegory that acquired accidental COVID-19 relevance, but that doesn’t really end up being about much at all, beyond that humanity sucks.’

A-list bomb of a movie, all inchoate rage and flailing limbs, falling right on top of you.”

A slapdash, scattershot sendup that turns almost everyone into nincompoops, trivializes everything it touches, oozes with self-delight, and becomes part of the babble and yammer it portrays… This might have been great fun if it had been executed with some respect for our intelligence, and for the power of sharpshooting satire, rather than glib nihilism.”

‘In its efforts to champion its cause, the film only alienates those who most need to be moved by its message… The champions of science must always try to leave politics at the door. Otherwise, the task is not just convincing people that the comet is coming, the planet is rapidly overheating or the vaccine will protect them. It is also forcing huge swathes of the population to accept that a cornerstone of their personal ideology is wrong.  And when the comet is this close, there just isn’t time for that’.

The reviews were followed by a small maelstrom of online comment about reviews, between scientists and reviewers, and comment about the comment.  Different people have read different things in the film. 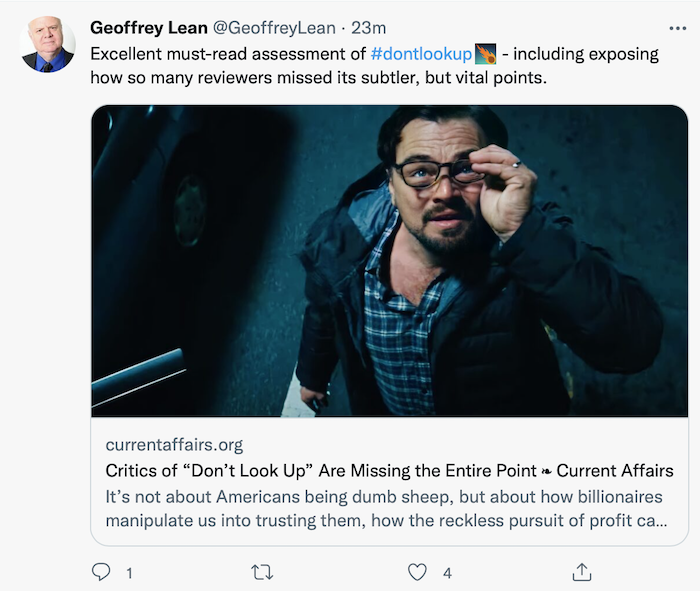 In Current Affairs, Nathan J Robinson took issue with the allegation of nihilism writing: ‘The point is not that the working class are sheep who don’t care about the future, but that the rich manipulate people’s perceptions of one another to serve their own self-interest’.   On 30 December Forbes magazine carried an appeal by Paul Tassi, ‘The ‘Don’t Look Up’ Critics Versus Scientists Narrative Has To Stop’.  Tassi wrote

‘…the success of the movie, compared to its relatively lukewarm reception by critics, has resulted in a pretty bizarre new narrative [apparently referring to arguments between McKay and critics, no doubt online] . The idea is that if critics didn’t like the movie, they must hate its message, the idea that climate change is a clear and present danger to our planet …   I do not agree that I must declare that Don’t Look Up is a great film, or else I’m contributing to “damaging” its message, and this view somehow puts me at odds with climate science. That is simply not how this works’.

Well if that’s what’s happening, I am with Tassi on that one but unless the scientists – film maker – critics argument begins to determine the public impact of the film, it perhaps does not matter that much. 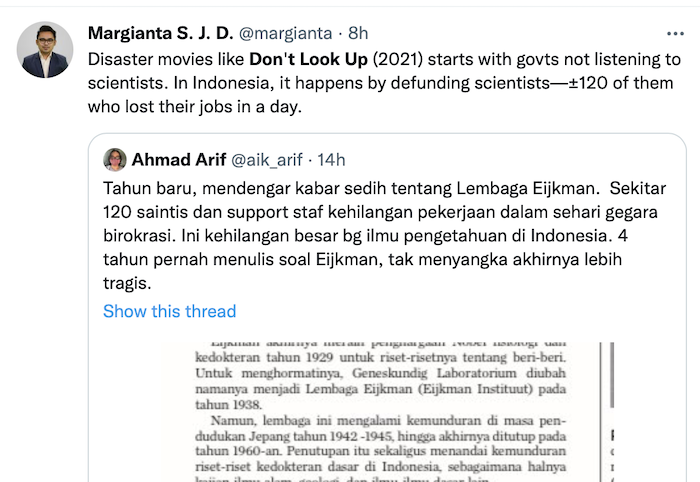 How Don’t Look Up May Make A Difference

First, Don’t Look Up is really quite funny.  It’s entertaining, it has big stars, and now it’s well known so it’s likely to get watched again, including by people who would might watch a political satire or ‘just’ a disaster movie but would never choose to watch a straight-up documentary on climate change.  It can reach a totally different, or at least far wider audience, than An Inconvenient Truth Mark 2 (or 3 if you include the sequel).

Second, it’s well nigh impossible to watch it and not to buy into the thickly-laid-on conceit and narrative of the film – the impending asteroid doom scenario.  That in turn makes it hard not to be emotionally on the side of the would-be truth-teller scientists.  For me that makes it more of a parable than a straight satire, black comedy or documentary: ‘a succinct, didactic story, in prose or verse, that illustrates one or more instructive lessons or principles’, in this case that politicians and the media should take science seriously.

Third in terms of effect, the swayable audience is not those who are dead set against climate action and who might (well) be offended if they recognize themselves in some of the thinly disguised Trumpian characters but those who are neither active deniers nor pro climate activists.  For that reason I am not so worried as the CNN reviewer about it alienating audiences.

Fourth, because it is not overtly about climate change, it will be hard for the denier lobby to ‘deal with’. Already some would be critics have tried to attack the ‘science’ in the asteroid story, which just makes them seem ridiculous.

Fifth, the title “Don’t look up” is a brilliant and entirely plausible call to action, or inaction, made possible by the simplicity of the story structure (unlike climate change) in which a straightforward specific danger comes from above.  I can imagine “Don’t look up!” becoming a cipher for evidence-denial, a cultural reference point heard in places from pub conversations to newsrooms and Parliamentary or Presidential debates, even in public demonstrations.  It will be understood by politicians and media.