This blog introduces four chapters of an essay on nature and farming inspired by Jake Fiennes’ 2022 book Land Healer.

‘Taliban Alley’ is the not very PC name given to a country-road not far from where I live, in Norfolk, England. It was coined by Jake Fiennes, in Land Healer: How Farming Can Save Britain’s Countryside. The farmland in Taliban Alley is a scene of agri-desolation caused by intensive farming.  It contrasts with what Fiennes has achieved on similar land, a few miles far away. 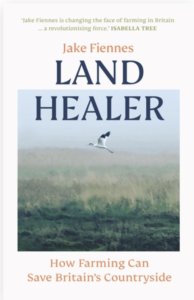 A former game-keeper, Australian sheep ranch hand and London night club PR, Fiennes is a scion of an old landed-gentry family now best known for movie roles played by his actor brothers Ralph and Joseph.  But don’t judge him by that.  In my view Jake Fiennes has done something rather more important.

Fiennes has shown by deeds not words how the ecological sterilisation caused by agricultural intensification can be put into reverse, not by taking whole farms out of production but by changing agricultural practice within farms, by farmers.  His work on East Anglian estates has brought birds and plants back to working farms long hammered by chemical agriculture, while maintaining economic viability.  The UK’s mainstream nature and countryside groups need to join the revolution in Taliban Alley.

Not surprisingly, his book is making waves in UK farming and conservation circles.  It’s been described as ‘radical’ as it can actually be delivered (in relatively short order), and ‘revolutionizing’, because of the implications.  For anyone who cares about nature and biodiversity, and indeed food-security, water-quality or climate change, the implications are huge.

‘Taliban Alley’ gets its name from Fiennes’ moniker for bad-farming: ‘Taliban Farming’, which he defines as farming that kills everything which it does not want. Mostly that means with ‘pesticides’, such as insecticides, fungicides and herbicides, and where they don’t do the trick, pollution by artificial fertiliser.  This is not just an English or even a British problem, it’s the unsustainable model exported around the world by agri-business and the agrochemicals industry after World War Two.  In other words, ‘conventional farming’ based on max-input max-output.

In the UK Fiennes has become something of a poster-boy for a loosely defined new agricultural revolution, not that the adherents see themselves that way.  It brings together the ‘3Rs’ of Regenerative Farming, Rewilding and Restorative Farming, the latter being on-farm restoration of nature (Fiennes’ particular focus). 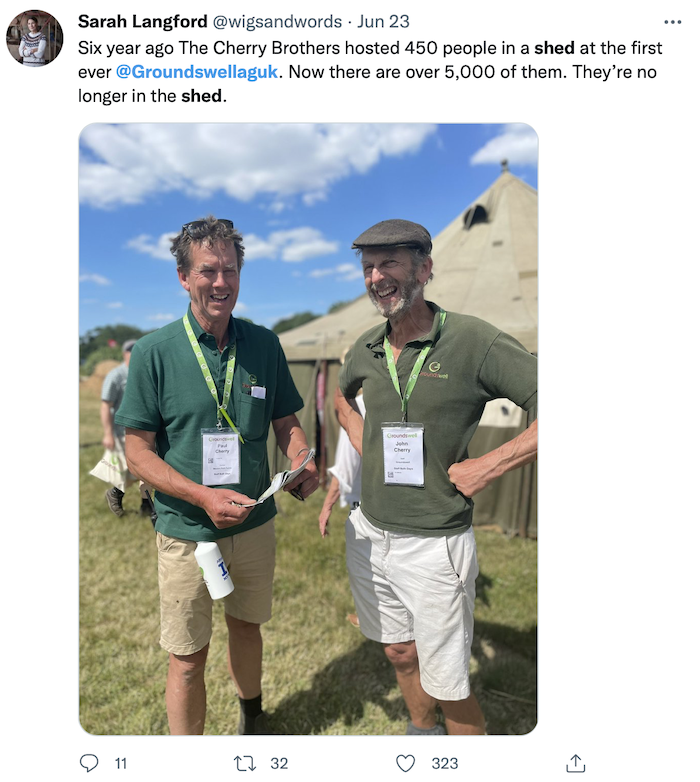 Events such as Britain’s Groundswell agricultural conference and festival are bringing together these often overlapping communities. Land Healer sold out within hours at this year’s Groundswell.   Yes there are risks of greenwash and free-riders but the opportunity is considerable, and in my opinion, historic.  Fiennes’ work has revolutionary potential because it comes from within, not outside farming. 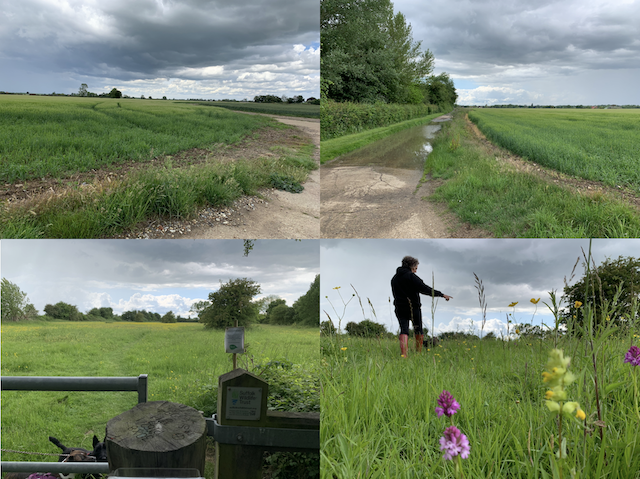 Outside (top) and inside Winks Meadow, Suffolk, a diminutive Wildlife Trust nature reserve and remnant of what was and what could be (see Chapters 2 and 4)

In a parochial UK perspective, we now live in one of the most nature depleted countries in the world. Intensive farming is the main reason.  Between them the nature and countryside NGOs have eight million members, over a tenth of the population:  most of their supporters are voters, all are consumers, the majority are investors.  Dozens of concerned UK NGOs have charted the decline of countryside nature over generations but have not stopped it.  There has never been a national campaign to do so, indeed there have been few individual campaigns.

In campaign-design terms, UK conservationists have failed to divide farming into good and bad, and thus failed to triangulate the issue into one where ‘good farmers’ and ‘bad farmers’ argue in a three-cornered fight while others represent the public interest.  As a result, the mainstream agri-business lobby has maintained a monopoly in representing farming in politics and the media, and NGOs have lacked the most basic campaign ingredients, the problem and the solution .

At the same time, dwindling cultural connection to nature has rendered even the environmentally-concerned public blind to the difference between nature-rich countryside and green but sterile cropland.  So there is no on-the-ground constituency to engage, organise and mobilise in a political ground war.  Which could and should be changed.

Fiennes’ cheerful identification of nature-annihilating farmers as ‘the Taliban’ provides a binary frame distinguishing bad and good farming, problem and solution: communications alchemy which opens a Pandora’s Box of potential.

The road to Taliban Alley near my home in North Norfolk

‘Taliban Alley’ is just one locational example of ‘bad’, and Great Farm up the road is an example of the ‘good’ but there are more Taliban Alleys and examples of the opposite, all over the country.  This communications gift opens the way to construction of campaigns which British NGOs have long tried but failed to create, or deliberately avoided because they were self-inhibited.

For decades the main UK nature and countryside NGOs worked on the assumption that the best route to influencing what happened the 70-80% of UK land which is farmed, was to promote examples of ‘good farming’ by ‘good farmers’.  Their example would gradually inspire others to do likewise. It made some progress but was ultimately a failed strategy.  It recruited perhaps 2-5% of farmers.

By the same logic, and because the largest were themselves land-managing organisations, the NGOs set on maintaining ‘credibility’ and good relations with ‘farming’ as a whole rather than ‘good farming’.  They effectively handed over the test of their legitimacy to the farming lobby.

No Line In The Sand

To stay within the tent of conventional farming the major NGOs eschewed endorsement of alternative approaches such as organic farming.  The price was an inability to draw a line in the sand, and say this or that farming practice is unacceptable.

The only exceptions were illegality and outright destruction of significant areas of wildlife habitats.  By the end of the 1980s there weren’t many such places left to convert to intensive farming.  The NGOs focused on doing what they could do protect the remnants, amounting to 5 – 8% of the land, well below the 16% or so estimated to be necessary to sustain nature.  It’s expanding but oh, so slowly.

A focus on places (sites), and the creation of nature reserve networks which were good in themselves and which pleased their members, meant that most NGOs did not engage with what was happening on farmland, which was a wipe-out of birds, insects, plants and wildlife across the landscape, largely driven by pesticides (see Chapter 3).

Data from the ‘Common Bird Census’, later refined as the Farmland Birds Index, showed that most of the birds present in 1970 had simply vanished by the second decade of the C21st.  This happened not so much through big-chunk ‘habitat destruction’ as a fine-grained thinning of the natural fabric within farms, including through every intensifying use of chemicals, a subject all the larger NGOs avoided until very recently. 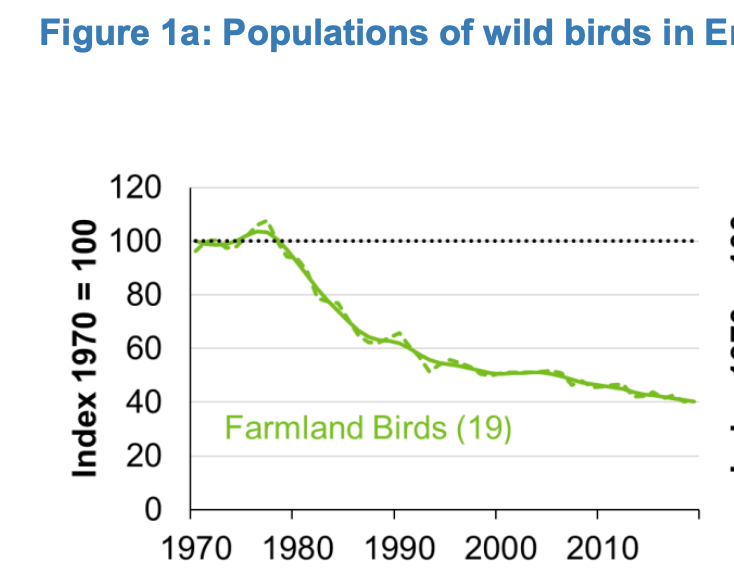 From the 1990s onwards the NGOs invested hope in AES or Agri-Environment Schemes funded by the EU and government. Eventually they covered the majority of farmland yet the majority of birds still disappeared.  This comfort-blanket of hope further stifled ignition of campaigns. 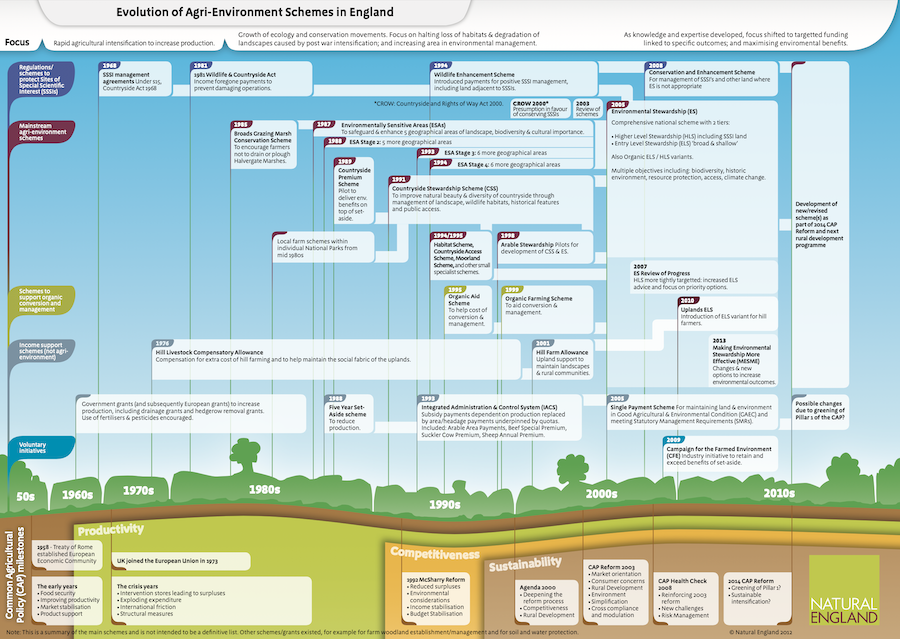 UK AES schemes (as of 2012) – a complex layer of sticking plasters which overall,  failed (see Chapter 2).

By 2013-19 the NGOs got together to produce detailed reports itemising this ecological catastrophe in State of Nature reports (see Annexe).  But whereas they promoted exemplar good farmers, the ecological wipe-out was represented only in statistics, with very limited emotional resonance.  As Stalin famously pointed out, when one man dies it is a tragedy, when a million die, that’s just statistics. The UK conservation formula has been to show the good through human examples, and the bad through anonymous statistics, and that fails. 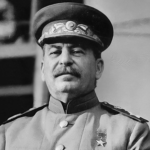 I explore these and other themes in four parts of an essay on Land Healer, nature and farming in the UK:

Part Four makes proposals which in summary are:

Local Resourcing and Organisation.  NGOs need to run a ground war campaign and that requires local logistics and assets including people familiar with farming and agrochemicals and resourcing as serious as that given to land management or fundraising.

Nature Ability.  The UK needs national campaigns of public education in Natural History (aka ecological literacy),  so enough people have the ability to discern the detail of nature to form an effective political constituency. Show people polar opposite examples.

Set up Taliban Farming Demonstrations.  As the (good farming) 3Rs begin to take effect we need to demonstrate bad farming, and having their own ‘Taliban Alley’ examples could enable NGOs fearful of farmer conflict to to show that without annoying individual farmers.

Taliban Geography.  To create public conversations from which specific campaigns could emerge, go out and map good and bad farming at a Parish level: Taliban through to Restorative.

Develop the Practitioner Lexicon.  Systematize and give names to the steps involved in Restorative Farming as described in Land Healer, such as  ‘hedge fattening’, to enable the public to recognize and appreciate good farming, and enable farmers to be recognized and rewarded.  Create a Farm Nature Code equivalent to the Highway Code.

Enable Stake holding in 3R Farming. Trial and introduce a system of private Countryside Contracts in which individuals finance good farming in return for access and agreed influence.

Agrochemical Free Buffer Zones. Campaign for a legal requirement for Regenerative/ Restorative/ Organic farming of up to 2km around all Nature Reserves and Protected Areas and make it mandatory across farmed areas of National Parks and AONBs.

Open Up The Policy Community.  Democratize representation of farming to government by requiring Ministers not just to consult the NFU (National Farmers Union) on policy but consult the full range of farming, environmental and civil society organisations.

Reward Everyone Who Helps Nature.  Campaign to democratize the use of public money for nature (public goods) so it is not restricted by ‘eligibility rules’ based on agricultural holdings but on outcomes. There in no natural justice in paying a farmer if s/he produces two Song Thrushes where there was one before, and not a householder with a garden.

Treat Farming Like Other Industries. Licence chemical farming by activity and location.  Set environmental quality targets based on a return to 1947 levels of ecological health.  Impose planning or other controls on any activities producing or likely to produce significant harm.

Part Four also covers recent developments which could be built on to build campaigns that join the 3Rs revolution.

The dramatic contrast between ‘Taliban farming’ outside Winks Meadow and the interior ancient hay meadow – a brief visit in midsummer 2022 as a thunderstorm arrived.  As Jake Fiennes said out to me at Great Farm, it’s the contrast between Taliban Farming and rich nature which enables people to ‘really get’ it.