The Values Behind #nomakeupselfie

What motivated people to do #nomakeupselfie   ?  It went big on twitter and on facebook as women posted pictures of themselves without make-up, to support cancer charities.

#nomakeupselfie engaged millions and hit the UK national news.  It also spread beyond the original demographic of young women: for example the two sisters, with a combined age of 174, who recently posted a #nomakeupselfie.

With the sort of response that professional e-campaigners dream of achieving, pundits of all colours took to the blogs to puzzle and argue over the rights and wrongs of the action and the “messages” sent or implied; about women, about image, values, cancer etc, and about the reasons behind the uptake.   Below I’ve posted a data-based illustration from Pat Dade at CDSM which might shed a bit of light on the psychology (motivational values) behind the response but first, what actually happened ?

Metro magazine gives a good account of the legend.  Fiona Cunningham, an 18-year-old young mum set up ‘No Make Up Selfie For Cancer Awareness’ Facebook page while in her bedroom in Stoke-on-Trent, Staffordshire.  Family members had suffered with cancer. She saw actress Kim Novak attend the Oscars without any make up on, and that gave her the idea.

So with the help of a friends she encouraged others to post #nomakeupselfie shots of themselves and donate £3 to cancer charity.  Metro notes: ‘Just days after her page was created on March 18, she had received hundreds of likes and Cancer Research UK announced they had received over £1million in donations as a result of the campaign on 21 March’.  By late March the charity, which had no role in starting the ‘campaign’, had received over £8m in donations, and several other charities, including one for adopting polar bears, had benefited from the numerous donations which got accidentally mis-directed.

Amongst the hundreds asked in its British values Survey, Cultural Dynamics asks lots of questions about image, having fun, looking good and a host of other attitudes and behaviours relevant to #nomakeupselfie.  Being seen, online or otherwise, can obviously be something to do with esteem, and getting your post seen is an ‘achievement’, while having it seen by your friends, means it is a peer group connection.  As readers of this blog will know, the psychological group most drawn to any activity which is fun, social and about receiving the approval, especially the visible approval, of others, is the (outer directed) Prospectors.

CDSM defines them by asking hundreds, sometimes over a thousand questions and comparing the result but one ‘Attribute’ drawn from those questions which seems very relevant to #nomakeupselfie, is ‘Image Aware’. Someone scoring high on ‘Image Aware’ would have responded positively two statements (on a 1-5 scale) ‘It is important to me to standout in a group by the way I look or talk’, and ‘I always dress for effect’.  Other Attributes which plot close to Image Aware on the statistical values map (see below) include Persona (effectively being someone else to be noticed) and Looking Good but the five Attributes which it is most associated with are Pleasure, Aspiration, Visible Success, Buzz and Simmer. 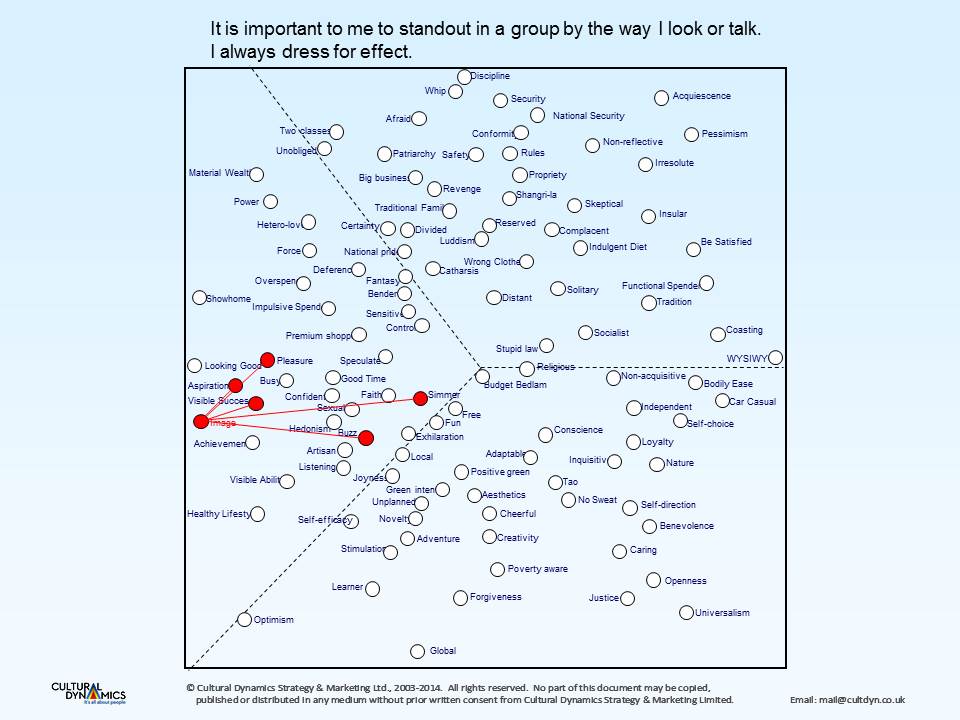 Here’s what values-measuring-guru Pat Dade says about these Attributes in relation to #nomakeupselfie.

“a) Pleasure: The act of posting the selfie probably is a bit of indulgence and curiously a bit of a sensual experience – showing the real me is both fun and liberating in a “real way”.

b) Aspiration: The selfie poster might say: “I may not subscribe to the more strident form of feminism held by my grandmothers and mothers generations – and making up is fun – but I think I am woman enough to hold my own with most feminists. I am confident that I can carry this off no matter what the outcome is”.

c) Visible Success: They may say: This is a tweetstorm and I’m part of it!

d) Buzz: They may say: I’m part of something that gives me a buzz by i) being invited to post and ii) living with the reactions from the post and then iii) reading about what is going with the whole behaviour set and being part of something that is “serious” – but easy for me to be involved in.”
e)Simmer: They may say: “And it pisses me off that as a woman I have to even think about this – made-up or barefaced – because men don’t have this issue, only women”.”

(For the meaning of these Attributes see CDSM’s Values Alphabet).

Pat says: “this needs to be seen in the context of many behaviours including Movember (only men) and the presentation of self and “doing good”  but using an “unusual self” to present when doing good – something a Prospector would find more “natural” than a moralistic Settler or an ethical Pioneer, who both would be more likely to feel slightly ambivalent about equating non-normal with good”.

For students of Values Modes it looks like the networking started with young women comfortable with the technology, and much more with Prospectors than other Maslow Groups, and probably Now People (NP) rather than Golden Dreamer (GD).  As it got bigger and seemed more normal, older women and GDs joined in.

Dade comments: “The technology is enabling them to say “look at me” and is just a normal part of their life and not something different. The thing that makes it fun (having fun rather than doing good is the prime driver) is that they are sharing face pictures with each other. Many psychological and anthropological studies show the importance of face in interpersonal relations.  However they are also sharing their “un-natural” self with others: creating a secret “un-natural” self that is in fact, the natural self before the fetishized “natural make up face” is applied !”

“Enough already !” I hear you cry. Are there any lessons here for campaigners ?  Probably a few. So thank you Fiona.  Metro says you are studying for a degree in criminal psychology with the Open University.  Good luck with that but you may already have earned yourself a place in the annals of psychology in a rather different area.