Would You Like to Hear a Nightingale ? If so, please help this Petition

Slowly, year on year, Britain has been losing its Nightingales but as so few of us ever hear them, very few people will have noticed.  The BBC once brought the song of the Nightingale to the nation, with its first Outside Broadcast.  Here’s the text of my petition to try and enlist the help of the BBC to once again bring Nightingale song into every home, and hopefully lend support to the efforts to conserve these fabled songsters. 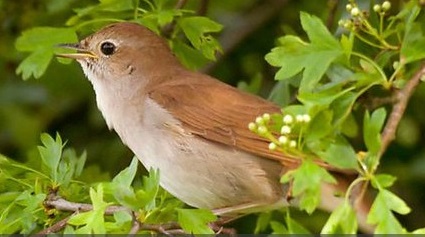 Broadcast Nightingales live on BBC radio this May 18th

At midnight on 18th May 1924 a million people tuned in to BBC radio to hear your first ever live Outside Broadcast: of a Nightingale singing in a Surrey wood as cellist Beatrice Harrison played music.  50,000 people were so moved that they wrote letters in response.  It became an annual BBC tradition – until World War II in 1942.

Anyone who has ever heard the song of a Nightingale, knows the extraordinary heart-lifting, soul-penetrating power of the voice of this bird. 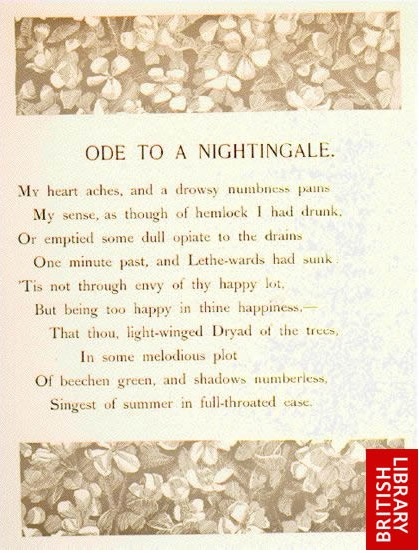 Once they were commonplace: Keats wrote ‘Ode to a Nightingale’ while listening to one in his Hampstead garden.  As a teenager growing up in Ruislip in the London suburbs, I heard just one signing Nightingale, despite the large ancient woodlands there, yet I was told that during WW II, they were common enough that people living next to the woods complained about the noise of singing Nightingales keeping them awake at night.

Fewer and fewer people now get to ever hear the song of a real live Nightingale.  They have declined 55% just since 1995.  Why ?  It is a mystery almost as deep as how it is that the song of the Nightingale mainlines straight to our hearts.  But we do have some idea.

Back in 1942, the BBC’s hugely popular ‘Midnight Nightingale Broadcasts’ were brought to an abrupt end when an engineer realized that they were about to broadcast the background sound of RAF bombers massing overhead, before setting off to strike Germany. So he pulled the plug.

Today the Nightingale is under a very different sort of threat: researchers think a combination of climate change and farm development in its African wintering grounds, the destruction of nesting habitat by introduced Muntjac deer in this country, poor woodland management and pesticides, may all play a part.

The Nightingale is but one of many songbirds, which for similar reasons, are rapidly vanishing from our countryside, our urban green sanctuaries and suburban woods, and thus from our lives.  It seems that developers and politicians do not care enough to keep even the clearest most obvious threats at bay – for example at Lodge Hill in Kent, Britain’s only woodland specifically designated as a valued breeding site for Nightingales, over 80 singing Nightingales are threatened with development for new houses.

If our society cannot save the Nightingale, it cannot save very much of what makes life really worth living.  Yet as David Attenborough has said, “No one will protect what they don’t care about; and no one will care about what they have never experienced”.

You can hear the evocative, liquid song of that lone, long-dead Nightingale from 1942, with the drone of bombers in the background, here.  It was recorded but never broadcast.  Now it’s time for the BBC to re-start the tradition, not to run a campaign but to enrich our quality of life, to at least give its millions of listeners the chance to hear a real, live Nightingale signing, if only once a year.

Beatrice Harrison and her sister lived at Foyle Riding near Oxted in the 1920s.  Their home became famous for the Nightingales and thousands of people traveled from London to visit and listen to them singing.  After the sisters moved, the BBC continued the broadcasts until 1942.  Beatrice was a friend of composers such as Delius and Elgar.  I don’t know what has happened to their home but it appears that the woodland around it may have been built on for housing.

The British Trust for Ornithology (BTO) conducts surveys of Nightingales.   BTO experiments have shown that deer browsing – ie eating the low vegetation that Nightingales need to nest in – have a negative effect.   The BTO’s 2012 survey estimated that there were 3300 pairs in the whole country – about one Nightingale for every 9,000 people.  The BTO says “the Nightingale is in danger of being lost as a UK breeding bird” and showed that it declined by over 50% between 1995 and 2008.

Nightingales are small Rufus brown birds a bit larger than a robin – not much to look at and hard to see but with an amazing song.  The sing in the day or at night but the night-time singing makes the biggest impression.  May is regarded as the best month to hear them.

The RSPB, Kent Wildlife Trust and others have been campaigning to save the woodlands of Lodge Hill in Kent from being destroyed for new housing.  1.3% of the UK Nightingale population lives at Lodge Hill.

My heart aches, and a drowsy numbness pains

My sense, as though of hemlock I had drunk,

Or emptied some dull opiate to the drains

One minute past, and Lethe-wards had sunk:

‘Tis not through envy of thy happy lot,

But being too happy in thine happiness,—

That thou, light-winged Dryad of the trees

In some melodious plot

Of beechen green, and shadows numberless,

Singest of summer in full-throated ease.

Part of ‘Ode to a Nightingale’ by  John Keats: full poem here

Thy liquid notes that close the eye of day First heard before the shallow cuckoo’s bill, Portend success in love. 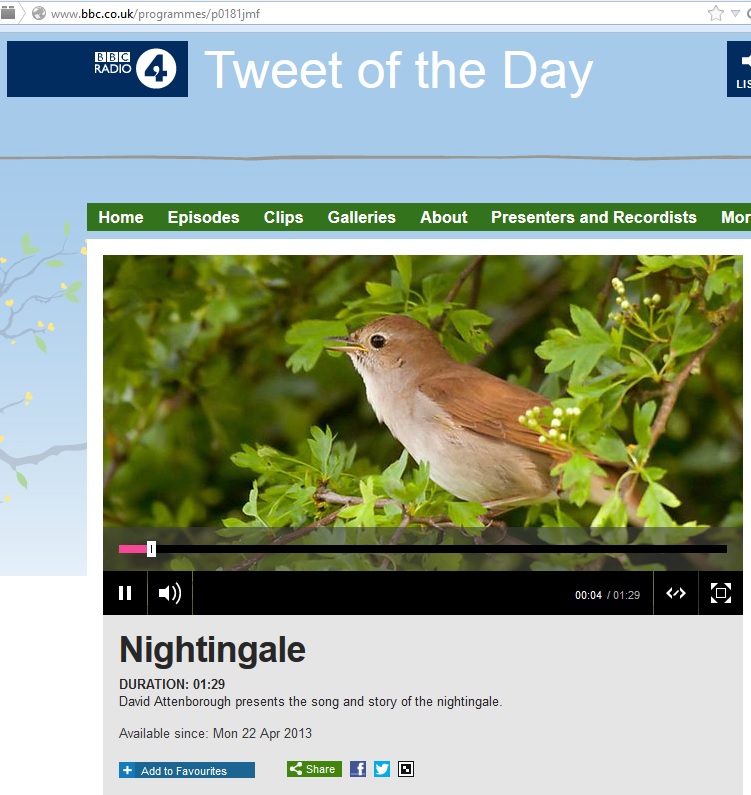 David Attenborough presented the Nightingale on BBC Tweet of the Day