Surveys of 15 countries representing the majority of the global population, show that it’s a predominantly Prospector world.  (To understand more about the ‘three worlds’ of these three ‘Maslow Groups’ see my book What Makes People Tick: The Three Hidden Worlds of Settlers, Prospectors and Pioneers, opposite).

Taken together, the 15 countries make up 59.3% of the global population (they are Kenya, China, India, South Africa, Russia, Thailand, Philippines, Mexico, Indonesia, Turkey, Brazil, Argentina, Japan, UK, Australia and the US) .  Each survey included over 2000 people, nationally representative for age and sex, and was fielded by GMI. The surveys were conducted by CDSM (Cultural Dynamics Strategy and Marketing) between 2011 and 2015 as part of a larger study with Campaign Strategy for Greenpeace. 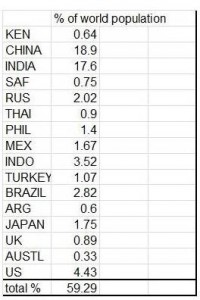 The average proportion of Prospectors (Outer Directed) across the 15 samples is 55%.  An average 20% are Settlers (Security Driven) and 25% are Pioneers (Inner Directed). 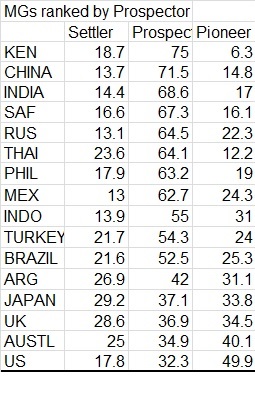 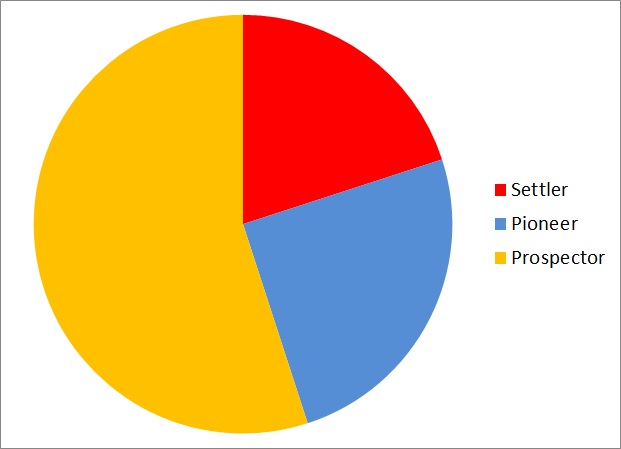 As has been discussed in previous Three Worlds blogs, the predominance of Prospectors in many societies has important implications for campaigners, most of whom (especially in developed countries) tend to be Pioneers and to make intuitive Pioneer-type assumptions about other people.  Pioneers have a high sense of self agency, like complexity and debating issues, and some disapprove of people for being aspirational, even for wanting to have fun.  But that’s the way most of the world is and for their ’causes’ to have mass appeal they need to communicate them in ways that offer success, fun, looking good and achieving the best, and positive action rather than self-denial, if they are to attract what in most countries is ‘the mainstream’. 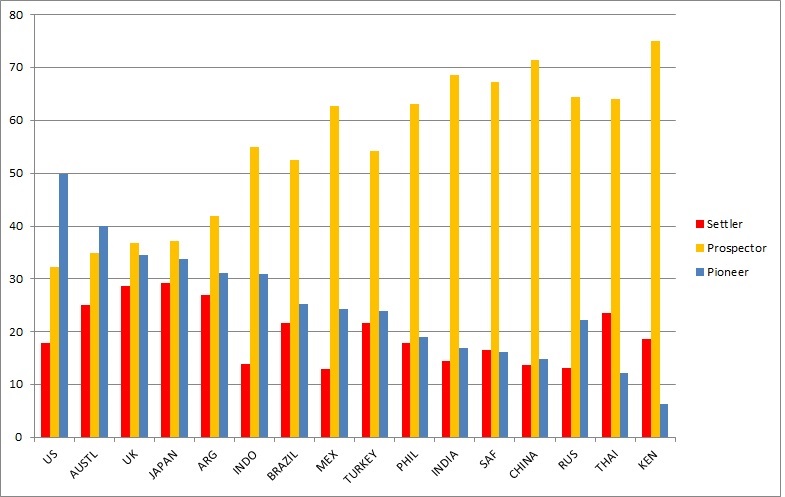 Above: proportions of Maslow Groups in 15 countries (ranked by Prospector).

The CDSM model splits out four distinct Values Modes within the Maslow Groups, each with a distinct motivational profile.  (See home page links to explanations of the Values Modes).

The survey results and global averages of the Values Modes are shown below:

Across the sample average, the two largest Values Modes are the GD Golden Dreamers and the NP Now People, both Prospector.  The former have recently transitioned from Settler World and are still quite conventional in their aspirations, although they are very motivated to find a quick route to acquiring the symbols of success.  The latter are much more confident and more interested in what Pioneers are doing, and exert the greatest influence over the other Prospector Values Modes, including the GDs.  The Now People are the arbiters of fashion.

Now People tend to look favourably on many ‘good causes’ but are often put off from engaging by the way that campaign groups try to approach or treat them.  Pioneer campaigners may even inadvertently drive Prospectors out of their own organizations by trying to make them more ‘worthy’, when it is often these people they need the most in order to engage the public.

The third largest Values Mode is the TX Transcenders.   This Values Mode tends to dominate amongst those actually taking action on ‘good causes’, especially where they are ‘global’ or challenging.  It is the Values Mode with the highest sense of self agency, and has greatest potential to act as a bridge for Pioneer ideas to the Prospectors but this is not always realized.

This is the first time these data have been published in this form and it is believed to be the only survey of its kind.

There is only one European country in the series above and CDSM plans to conduct a survey of more European countries in the next twelve months.  For more on that and for any methodological enquiries, contact Pat Dade at CDSM.

Thanks to CDSM and Greenpeace for permission to use these data.

Want to know your own Maslow Group and Values Mode ? take the free CDSM online survey

1 Response to It’s A Prospector World