Of course it’s never quite that simple but … an essential truth is that the UK’s Labour Party lost the May General Election because it lost the support of Britain’s Prospectors.  Not all of them of course and Pioneers and Settlers played a part too but un-noticed by almost all political pundits and politicians themselves, as they simply do not pay attention to values data, it was the basically the Prospectors ‘wot did it’ for Labour.

One politician however has been paying attention: Jon Cruddas MP, who has been conducting an inquiry into how and why Labour lost.  He commissioned YouGov surveys on a panel of voters segmented by values, along with the more usual socio-economics and demographics.  He’s written an interesting article about it on the New Statesman blog. 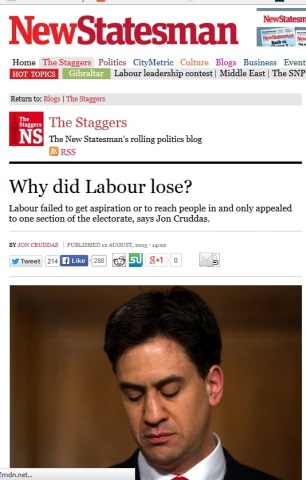 Here’s the most basic data from the Cruddas survey:

He explains: ‘We conducted two polls in England and Wales, one in November 2014 and one after the May election. Each had representative samples of 3000 people …

… Over the period between the two polls Labour was weakest amongst socially conservative Settlers and strongest amongst liberal progressive Pioneers. It held its ground among both values groups.

The Tories improved their position among both Pioneers and Settlers but at the expense of the smaller parties. At the election Labour remained ahead among Pioneers (5 per cent) but among Settlers it ended up significantly behind the Tories (16 per cent).

However it was the pragmatic-minded Prospectors who dealt Labour its devastating electoral defeat. In our poll in November 2014 Labour was 6 per cent ahead of the Tories in this values group. By the election it was fully 19 per cent behind. Prospectors who had said they would vote Labour or who had considered voting Labour swung behind the Tories, who secured a phenomenal 50 per cent of all voters from this values group’.

(In Britain the three groups are of roughly similar size – see this earlier blog for data from the UK and other countries comprising most of the global population).

There are many things you can say about this but to the best of my knowledge, it is certainly the first time that a serious serving British politician has used mapping of motivational values to conduct a strategy debate.  Too bad for the Labour Party that it hadn’t taken values seriously before the election.

Here’s the CDSM/ YouGov heat-map or gradient map of Labour support in Nov. 2014: 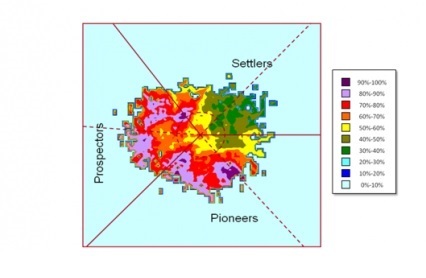 And here’s what happened in the Election in May 2015: 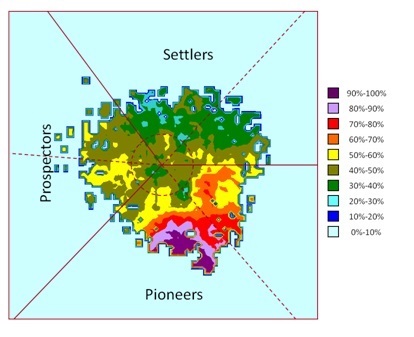 Campaigners from NGOs may recognize that it’s only amongst the high-self-agency Transcender Pioneers that Labour retained strong support.  Good people to run campaigns with but too few in society to win General Elections. (Unfortunately for Labour this now looks very like the LibDem values base from 2005 – 10)

At least in Britain, political affinities (especially Prospector) are more volatile than many other values-differentiated behaviours, as illustrated by the collapse of Labour’s Prospector support over this short time interval.

This is where the Prospector vote went (Conservatives General Election 2015): 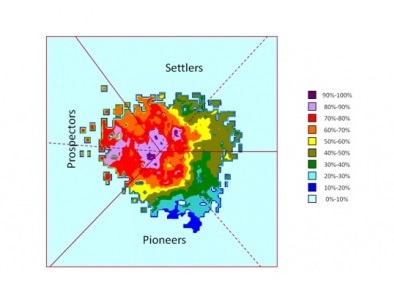 Pat Dade from Cultural Dynamics (CDSM, operators of the values analysis system) has also recently weighed into the blogosphere with several pieces analysing the values dynamics and values-dilemmas that Labour now faces if it is to rebuild its fortunes.

Below is his topline breakdown of the three ‘values minds’ which Labour is now in, approximating to Settlers (‘Blue Labour’, a term coined by earlier political analysts such as Maurice Glasman for the old socially conservative Labour base, now mostly lost), ‘New Labour’ (Tony Blair’s achievement was to appeal to Prospectors), and ‘True Labour’ (the modern most reliable core, which is Universalist Pioneer, aka ‘Guardian readers’).  Of course because they mostly don’t see even their own motivational values (read my book What Makes People Tick) , the debates between and about these groups are often fabulously dysfunctional, as in the current Labour leadership contest. 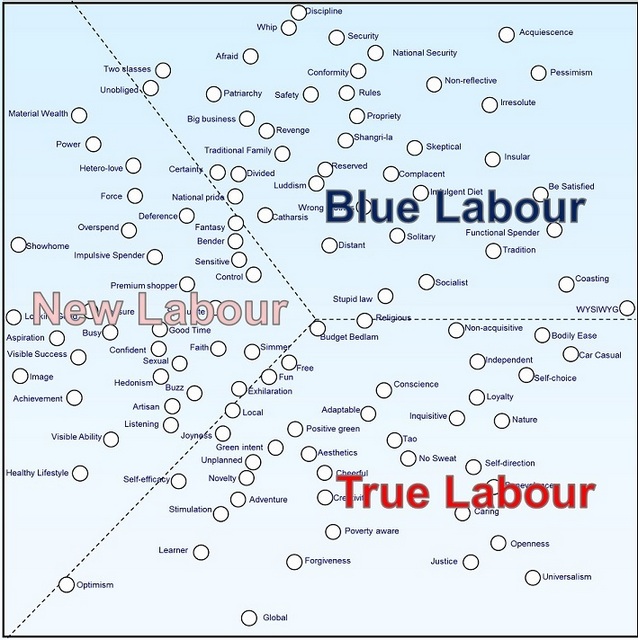 Here’s Pat Dade’s latest version of his maps from his article RE-EVOLUTION 1.0
Changing a Failed Dynamic which show the beliefs of these groups in more detail: 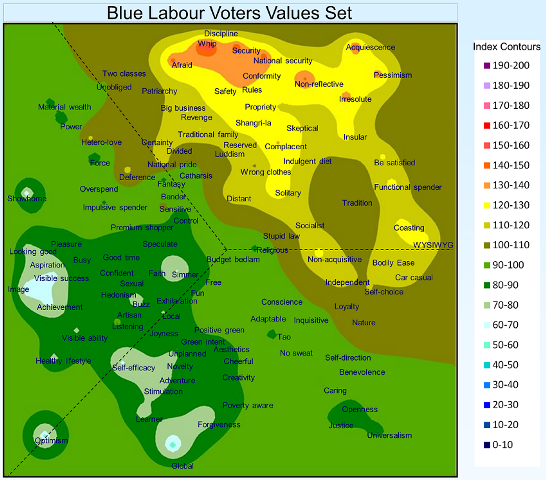 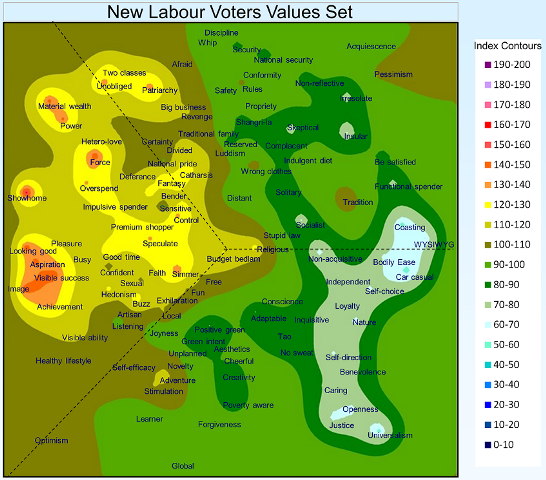 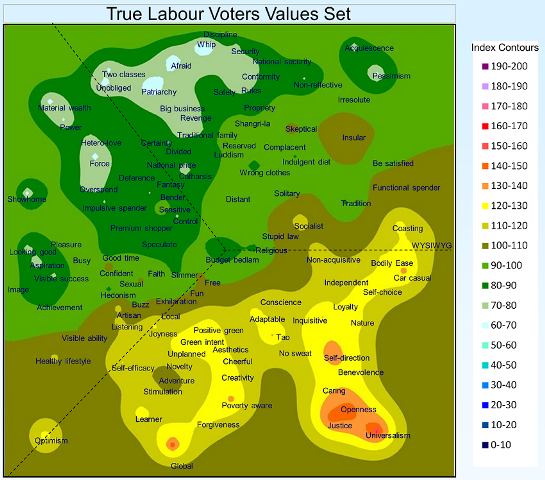 Got all that ?  If not have a look at his piece.  Or email Pat

‘In representative democracies’ says Dade, ‘Political parties theoretically reflect the values of their supporters. When they don’t, their support falls away and they lose elections. For such parties with insufficient votes to form a government, the way forward is often not clear when competing values are battling to define a future vision. This is the territory the Labour Party currently occupies. It is reflected in the three ‘tribes’ which are trying to reconcile (or not) the differences between the upper echelons of the Party and the clearly emerging values of a frustrated membership’

In Power to the People ? another recent blog in the same series, Dade points out that three of the current Labour leadership candidates are promoting themselves on the basis that they can get into power, while one (Corbyn) promotes himself as the universalist.  These are polar opposites in the values maps and the surge of new voting supporter Labour supporters is clearly ‘based on a Universalism dynamic’.

So Is The Game Up for Labour ?

Not necessarily.  The Party has often attracted significant Prospector support this century and it could do again. 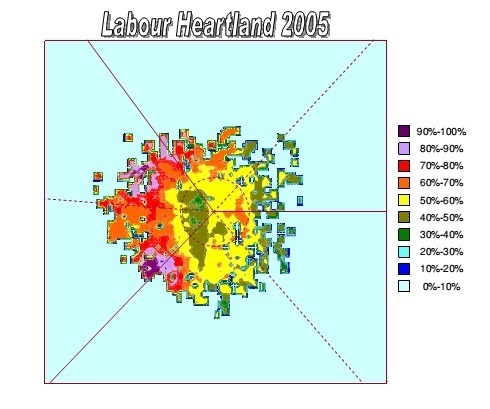 In 2005 Labour was still enjoying New Labour success with the Prospectors but was (post Iraq War etc) less popular with Pioneers. 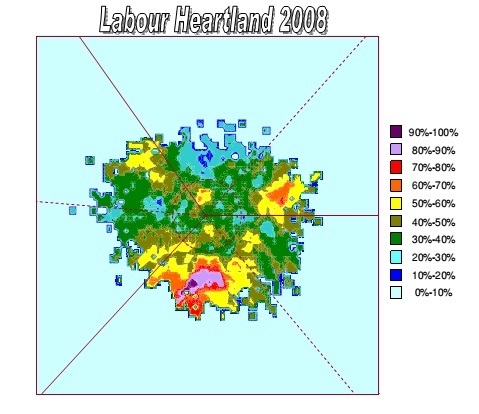 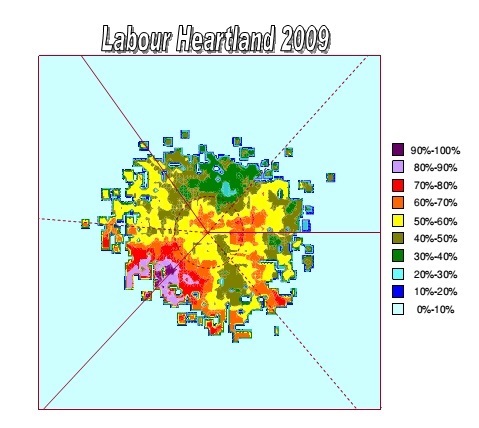 A better spread in 2009 with support  in Transcenders (bottom) and (to their left) Now People Prospectors. 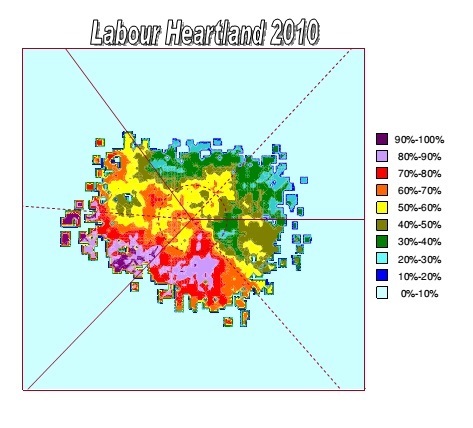 Looking good in 2010 with support from Prospectors and Pioneers, though not much with the Settlers.  (See also articles such as Dade’s State of the Parties in 2013, and here and here).

But for Labour to now attract Prospectors, who are not simply around a third of the population but also the majority of those in full time work in businesses, and the swing-iest of voters, Labour’s going to need to look good, feel good and out-shine its rivals. Prospectors like their politicians to be stars and a bit entertaining, whiler emaining popular enough not to be an embarrassment with friends (Trump probably teeters on that edge and if he splits the Prospectors he could plummet).

So could Jeremy Corbyn ever appeal to Prospectors ?  Not likely on rational analysis (Kahneman’s System 2) of his policies by Prospectors but then that’s not what happens.  Not if you look at his past, promoting a pick-n-mix of left wing universalist causes and not winning any of them (hence the New Labour conventional wisdom is that he’s a liability).

But what if fashion changes ? (The test of which is the opinions of the Now People).  Could Corbyn yet become a sort of political grunge retro fashion icon ?  Possibly if he looks popular enough.

He’s got a yawning gulf to cross from universalist ethical land to appeal to the power and material wealth brigade, and in the middle of that divide lies ground such as ‘showhome’, which at first sight looks impossible to traverse. And I am fairly sure, Mr Corbyn probably doesn’t approve of such calculation.  After all, a much cruder version of it was made famous by the late Philip Gould, New Labour’s ‘election guru’.

If he does become Labour leader, their best hope of winning back the Prospector middle ground probably lies in making the Labour Party fun and fashionable around him.  It seems unlikely that will be by design.  Unite and the other unions are not that sort of Party People.  But what if the surge of younger people attracted to Corbyn’s Labour, not all of whom are tactical Tories, Trots or other entryists, are themselves part of a social change that could float Corbyn’s boat even despite all the conventional Labour ballast ?  A tide of political New Political Beatniks ?

So don’t try to be the trendy vicar Jeremy.  Remain authentically unreconstructed and just hope that vicars become trendy.  If an interest in radical policy becomes de rigeur post-hipster, Corbyn could yet prove to be an electoral asset.  But maybe that’s too radical.

In Pat Dade does offer a more conventional recipe (see New Blue, Or True Labour) , for Labour to build a strategy based on ‘the core of traditional British values post WW2’.

The current ‘True Labour’ (Pioneer) base is, he points out ‘Intrinsically opposed to the more extreme manifestations of New Labour –Two Classes, Unobliged, Patriarchy, Visible Success – they instead proclaim their support for Justice, Openness, Universalism, Self Direction, Caring, Benevolence, Global and Poverty Aware’. He adds:

These are the sorts of people who do not support austerity as a response to the desire to live within their means or cut the deficit. Austerity is seen as a strategy – and not a good one, even according to the IMF – to reduce a budget deficit. Ideologically driven cuts to taxpayer funded programmes to achieve the politically motivated goal of a balanced budget are an anathema to their values system.

This is at the core of traditional British values post WW2, and the platform upon which Labour had developed a body of policy and practice that had contributed positively to the rest of the democratic world. This is what was missing from the rhetoric of the recent election – Ed Milliband’s ‘one nation’ message may have been trotted out at Party conferences, but was missing from the everyday language of the party elites who defined the party narrative during the last election.

This core values deficit, evident in the run-up to the General Election of 2015, is also being ignored in Labour’s post-mortem research and among its mainstream leadership candidates. The Jeremy Corbyn offer resonates so strongly with True Labour values that its popularity should come as no surprise.

There is a potential political playbook waiting for Labour, drawing on values insights.  The problem is that with the exception of a few mavericks such as John Cruddas, most of Labour’s players probably can’t yet read it.