VW Digs Hole Deeper: What Campaigners Should Do

Amazingly, VW is managing to dig itself into an even deeper hole.  So deep that perhaps campaigners are losing sight of it altogether ?  Tonight a British Conservative MP declared that VW ‘deserves to suffer damage‘.  Politicians know that the time to kick something safely is when it’s “down”, and VW is unpopular, not-British and, conveniently (given the Conservative’s position in Europe) German.  And it’s shares are plunging.  What a gift.

So what we have here is a rare example of a gift for any campaign where the opponent is, or is at all similar to, VW.  For example on TTIP where transnational corporations like VW stand to gain most.  Or on climate change where the fossil-fuel-getting and using- industries are the main obstacle, united in what Mrs Thatcher once called “The Great Car Economy”.  And on every campaign around the world for cleaner city air, where any part of the car lobby is a problem.  I’m surprised the campaigners are not making more of it.

A few days ago a VW executive appeared in the US Congress and tried to blame a ‘couple of rogue’ engineers for the problem. He also claimed to ‘feel personally deceived‘.  Not exactly taking responsibility.  Before the British Parliament today, VW apologized to car buyers and MPs but it seems, still not to the breathing public.  No clean up of the damage (to air and health), no commitment to go electric, as I argued in the previous blog to this one.

VW do not seem to have learnt anything from previous corporate scandals.  Take the 1995 Brent Spar campaign.  After that Shell declared that they needed to find their ‘social licence to operate’.  VW don’t seem to have noticed that they’ve lost theirs.

Following that campaign (because I worked at Greenpeace) I got asked many times why the public were so outraged at Shell’s plan to offload 14,000 tonnes of its junk into the ocean.  I tried to sumarise it in this “Brent Spar Scale”: 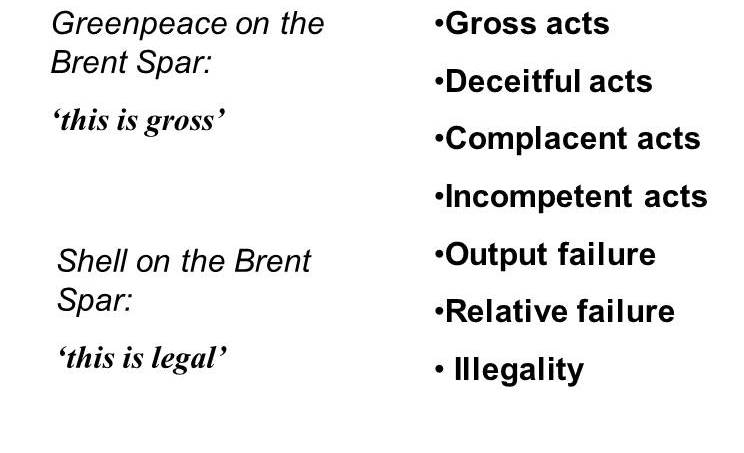 Until it was too late, Shell went on arguing that they had the necessary permissions from the UK Government so the ‘dump’ was ok.  Greenpeace argued it was gross and the public agreed with them.  Just being legal was more or less irrelevant, particularly as many of the public felt that somewhere along the line, secretive corporate lobbying of governments had probably made the relevant rules so weak as not to really be in the public interest.  Today it is likely that many more people feel that way.

It’s no coincidence that some of Jeremy Corbyn ‘s supporters have taken to twitter to point out that he has no known friends in the lobbying business, nor come to that, in large corporations.  Conventional political pundits do not seem to have understood that while this ‘unworldy’ profile may make him look unfit to govern if the role of government is to please corporations, it is a popular “breath of fresh air” to the many who don’t want government to be like that.

In the above ‘scale’, being ‘less good’ than other companies is worse than being illegal, and above that not doing something you should (output failure) and above that being incompetent but the real damage starts nearer the top.  Complacency – not seeming to care – is much worse, and here VW don’t seem to care about the breathing public, only their own reputation and car buyers.  Otherwise why aren’t they talking about cleaning up the air and making amends for damage to health, and going electric ?

Of course in this scandal VW started at ‘Defcon 2’, being deceitful, and with the consequences at Defcon 1: creating massive air pollution, at its worst in the places closest to victims like young children in buggies on city streets clogged with cars.  VW now seems intent on anchoring itself there, pleading only that it is also incompetent (not having noticed what was going on), something that industry experts do not seem to believe.

Actions not words are the only hope for VW.

Campaigners should not let VW sink from sight under a huge wave of public opprobrium.  They should make sure that public alignment is focused on the decisions that now really matter, such as where VW stands on TTIP and stronger or weaker regulation in Europe, and whether VW will drop diesel and petrol engines and go electric.  Soon.

If they are sharp, they may even manage to push a few other deserving cases into the hole VW have dug.