Martina Römmelt-Fella is a Bavarian engineering boss and leader of an initiative of small and medium sized businesses critical of TTIP.  She cites lack of control on cancer pesticide pesticide Captan,  allowing GM in dairy feed and lactic acid treatment of beef as indicative of the EU already trading away its standards in negotiations with US on TTIP. Read Euractive magazine article ‘SMEs Want A TTIP Rethink’.

Römmelt-Fella calls for a “reboot” of the TTIP negotiations and says: ” We’ve come up with a checklist of things that should be guaranteed, including transparency, standards and democratic processes.  The response has been enormous, especially given that businesses are not often the ones who criticise this type of agreement”. 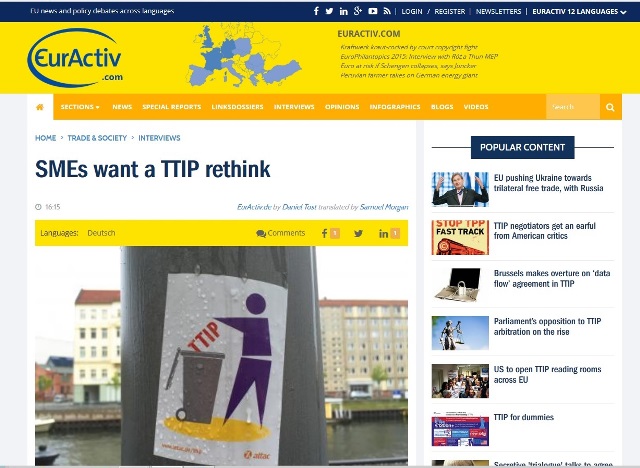 An English language version of the Veblen Institute report on the potential impact of TTIP on small businesses in France is now available online here.

We all know that many civil society campaigners are concerned about the secrecy surrounding TTIP (the proposed Transatlantic Trade and Investment Partnership), and oppose the undemocratic ISDS (Investor State Dispute Settlement) mechanisms but according to the European Commission, TTIP will anyway be great news for small businesses.

For instance, on 11 November an article in the French Basta magazine entitled ‘More and More of Europe’s SME Bosses Are Turning Against The Free Trade Deal, TTIP’ , noted that European Commissioner for Trade, Cecilia Malmström has said “We know that smaller firms and the communities they operate in stand to be among the biggest winners from this deal”. ‘She is’, wrote Rachel Knaebel of Basta, ‘pulling out all the stops to convince Europe’s small and medium-sized enterprises of the benefits of the transatlantic free trade agreement, known as TTIP’.

Only many small businesses are not convinced. Some of them have started to campaign, which for time-pressed small businesses, is quite a big thing.  Here are some examples: 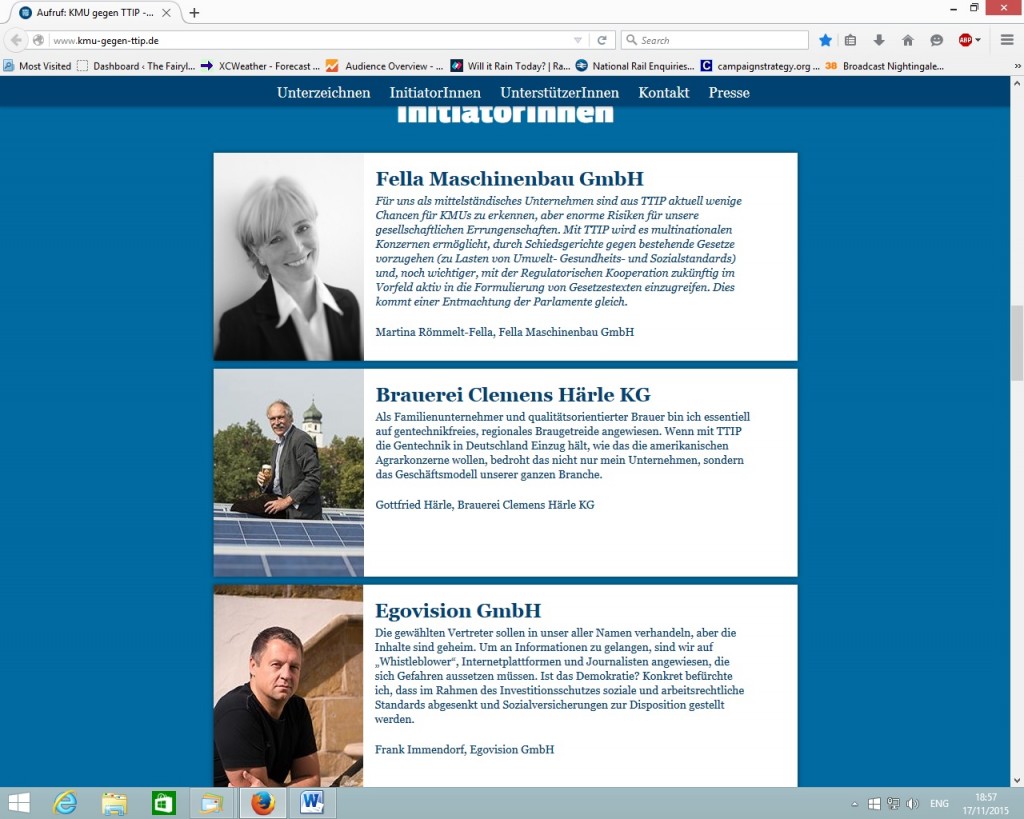 http://www.kmu-gegen-ttip.de/ – some of the campaign starters

In Germany, small and medium-sized enterprises have now launched their own anti-TTIP campaign, called ‘KMU gegen TTIP’ (‘SMEs Against TTIP’). The instigating firms (Fella Maschinenbau GmbH, Brauerei Clemens Härle KG, Egovision GmbH, Ulrich Walter GmbH/Lebensbaum, Velokonzept GmbH) are calling for ‘a fact-based discussion of the issues’ including the possible disadvantages and risks. A website www.kmu-gegen-ttip.de was launched in August and as of 16 November over 1700 companies have joined them.

Dr Katharina Reuter of the German Federation of Green Businesses (http://www.unternehmensgruen.org/en ) says ‘small enterprises are under-represented in lobby discussions on TTIP being held by the EU Commission. These discussions are led by major corporates – who in turn are trying to dictate the terms. German SMEs are obliged to be members of the openly pro-TTIP IHK (German Chamber of Commerce and Industry) but business people in Germany often feel their views are not being heard. The IHK’s pro-TTIP lobbying work simply ignores the views of companies that oppose TTIP. For our SMEs it’s important to know what really is in TTIP’. 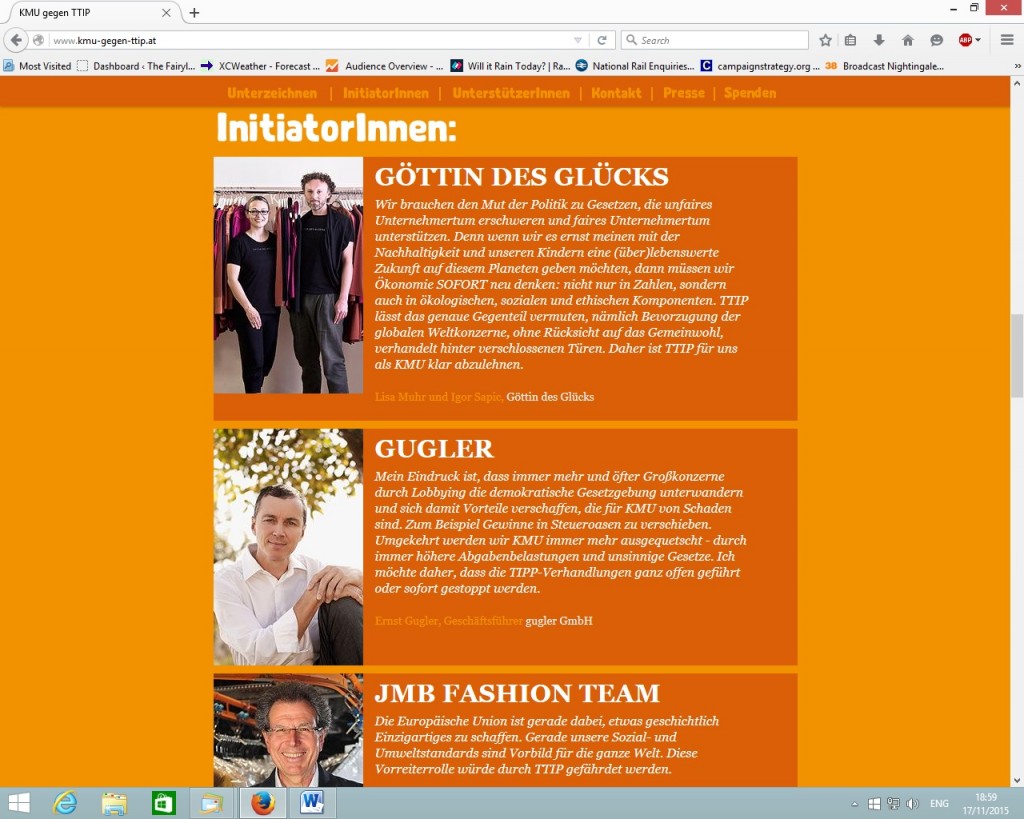 Businesses from fashion companies to farmers have signed up in Austria

In Austria, a much smaller country, more than two thousand SMEs ranging from IT companies to clothing, food and logistics businesses, have signed a similar protest petition at http://www.kmu-gegen-ttip.at . Lisa Muhr, who manages a small fashion business in Austria, with 23 staff started the petition in June. She told Basta: “Political leaders in Austria first claimed that TTIP would lead to economic growth and create jobs. When studies started to show that this was not necessarily the case, the politicians then claimed that the deal would be good for SMEs. At that point I felt like I was being taken for a fool”.

Austrian campaigner and economist Alexandra Strickner points out that it is not just the ‘usual suspects’ of ‘progressive’ campaign groups or left-wingers who have concerns in Austria. To the alarm of politicians still supporting TTIP, the avowed TTIP-sceptics now also include over 200 farmers: www.bauern-und-baeuerinnen-gegen-ttip.at.   Strickner says:

“In Vorarlberg, the Wirtschaftsparliament of the WKÖ (Chamber of Commerce) (the ‘Economic Parliament’ which exists in all nine Austrian provinces) has voted in favour or the proposal of kmu gegen ttip that the wkö should conduct a study to looks into both the opportunities AND RISKS of TTIP.   All those parliaments are dominated by members who are affiliated with representatives from the group of Conservatives. In the Vorarlberger Wirtschaftsparlament, several conservative group delegates openly spoke out against ttip and voted for the KMU gegen TTIP proposal”.

Freek Bersch points out that a similar SME campaign has been started in the Netherlands, attracting over 300 signatories. 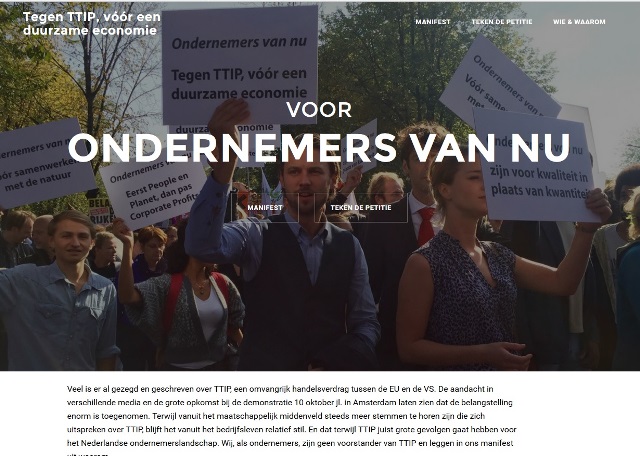 Ondernemers Van Nu say: ‘as entrepreneurs we are not in favour of TTIP’  The organisation calls for a ‘sustianable economy’ and states ‘Recent decades have shown that trade agreements provide for elimination of social and environmental legislation.  The ‘non-tariff barriers”.

Why Businesses Are Campaigning

It hardly needs saying that SMEs are not natural campaigners. Small businesses tend to be conservative and focused on the immediate factors which impact on doing business. On the face of it TTIP is remote and the case for it is usually put in macro-economic terms but as soon as you look at the details of what TTIP involves, it becomes much more visible in terms that could well impact on SMEs.

Campaigners and critics point out that the official economic case that TTIP will create overall economic benefits in Europe rests on the assumption that a lot of trade currently conducted within Europe will get converted into trade with the US but this ‘trade diversion’ could have a large negative impact on SMEs, while benefitting some large corporations (eg German car exporters like VW).   Likewise, analysis of existing ISDS provisions suggests that it is large not small firms who will both qualify to use them and, be able to afford to do so. Similarly, the “regulatory convergence” provisions are likely to be influenced by big firm lobbying and do away with many health, environmental and local-first procurement policies which have mainly benefited small companies rather than large multi-nationals.

On top of this, if TTIP opens up European markets to big American companies with lower labour costs and environmental standards, American brands and corporates could penetrate EU markets leading to what one British critic has called “cultural convergence” – a loss of distinctive European regional and local business cultures with strong ties to local communities and tradition, in favour of American chains, with an irreversible loss of diversity and quality of life. This aspect of TTIP has been hardly investigated at all.

The overall effect of TTIP on the business structure of Europe seems likely to be a ratchet of competition favouring large companies over small, with the progressive extinction of many of the latter, even though SMEs make up more than half of all EU business and employment. 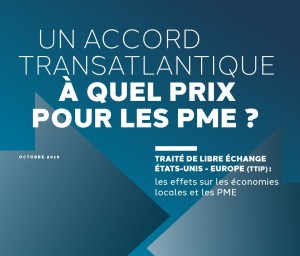 In October, Mathilde Dupré at the Veblen Institute in Paris published a 23 page Report on TTIP and SMEs called ‘A transatlantic treaty: at what cost to SMEs?’ It states that the commercial benefits of tariff cuts and harmonization of standards will ‘certainly benefit the 0.7% of French and European SMEs that export to the United States’.But ‘the value of goods and services exported by them represents less than 2% of the added value produced by all SMEs’. She asks ‘What about the effects for 99.3% of SMEs that do not export transatlantic?’

Dupré argues:‘the most optimistic macroeconomic results of impact used by the European Commission related studies have very low earnings growth over the long term ( or 0.05% per annum for the next ten years).An alternative Tufts University study provides instead a decline in exports and the European GDP (-1.19% and -0.48% respectively for France over ten years)’. Plus: ‘The anticipated erosion of intra-European and other third countries generated by the influx of cheap goods and services from the United States could destabilize the majority of European SMEs whose activities primarily targeting domestic and neighbouring markets.The European Union is indeed the preferred destination of exports of French SMEs with 66% of flows’.

She notes that: ‘According to the study by the Bertelsmann Foundation, trade flows between France and Germany could well decrease by about 23% and 36% between Britain and France’.

Dupré told Basta: “for a year now the European Commission has been banking on the support of SMEs to bolster the pro-treaty camp. Whenever it can, the Commission advances the benefits promised to SMEs”   Knaebel wrote: ‘Herein lies a problem for neo-liberals: the European Commission’s new communications strategy resonates less and less with Europe’s SME bosses. An increasing number of them are becoming more sceptical or even squarely opposed to the free trade agreement’.

In a post earlier this year I wrote about the possibility that Britain’s celebrated political segment ‘White Van Man’ (WVM) might lose out as a result of TTIP, and sure enough UKIP, the spiritual home of many WMVs, has come out as TTIP-sceptical, becoming strange bedfellows with left of centre TTIP critics such as 38 Degrees. But all that is tangled up in the parallel debates about the upcoming British referendum on staying in or leaving the EU.

So could a similar business uprising start in the ‘nation of shopkeepers’ ? Possibly. One of the liveliest social movements current in ‘Middle England’ (a psychological and social rather than a geographic category) is the localist ‘Totally Locally’.

In a brilliant piece of campaigning it seems that a tv producer has convinced a gaggle of SMEs running Totally Locally-Crickhowell (Crickhowell is a small Welsh town), to launch an innovative tax-revolt against the UK government. They are angered by policies which allow mega-companies like Amazon to utilise offshore tax havens and pay little or no UK tax while they, the ‘butchers, bakers and candlestick makers’, have to pay their fair share. Or they did until ‘led by traders including the town’s salmon smokery, local coffee shop, book shop, optician and bakery’ got together, hired their own accountants and set up their own offshore tax shelter scheme. It’s all perfectly legal and agreed with the British tax authorities. As The Independent says, it ‘could spread nationwide’. One wonders what they would do if they realised the implications of TTIP ?

(Footnote: of course ‘tax responsibility’ is not part of the TTIP discussion. But an ISDS mechanism could be used by Multi-Nationals against any country that introduced tax reforms to make big corporations pay their fair share of tax. So TTIP might indeed undermine current efforts in the fight against tax avoidance.  Disclosure: I am doing some work with MORE, a project to encourage responsibility in trade agreements in Europe – website coming soon !)

1 Response to Small Businesses Start To Campaign Against TTIP