With the Paris Climate Conference in full swing it is a little late to be publishing new data on public perceptions but in case you delegates and NGOs are stuck for something to read, here are a few values survey results hot ‘off the press’ from Cultural Dynamics (CDSM) . These questions were put to representative national samples in the UK, Germany, France, Spain and Italy in November 2015.

First up the national values profiles. They all look fairly similar and not surprisingly more like Japan, Australia and the US (see full data sets here) than developing countries, which are mainly Prospector dominated. (I will publish the breakdown of the 12 Values Modes another time). 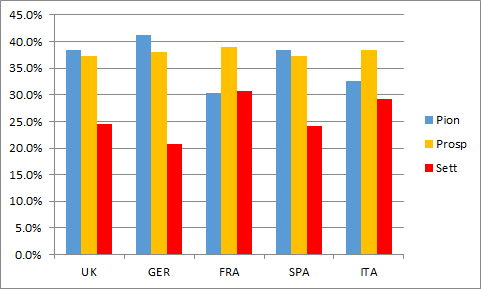 Above: percentages of Pioneers, Prospectors and Settlers (for an explanation see www.cultdyn.co.uk or my book What Makes People Tick – you can buy it at this blog (right side of page)).

Germany has slightly more Pioneers than Spain or the UK but only just, and France the least but it’s only a 11% difference. The % of Settlers varies more, with the greatest % in France at 31% but essentially all these countries are close enough to a third- a third-a third for it to be important in any broad politics or social change proposals that they somehow have support from all the three ‘Maslow Groups’ and not just one of them.

On the other hand, even the change-resistant Settlers will eventually go along with anything that has gained significant support from both the Pioneers and Prospectors, as in all cases this would tend to create a majority, and so the idea or behaviour would start to seem ‘normal’.   Something becoming ‘normal’ is a trigger for Settlers to adopt it as a new behaviour. Finally, as the name suggests, Pioneers are the initiators of change and in each of these countries they are at least 30% of the population and so a good base for change, if you can get their attention and they think it’s’ a good idea …

CDSM has asked many questions related to ‘climate’ and energy in a lot of countries (see a sample of my papers on their work here , the 15 country survey here and an article in UNA magazine here) . One of those asked most often is agreement/disagreement with the statement “Climate change: I don’t believe in it”.   Here are some of the 2015 results.

Climate Change: I don’t Believe In It

Spain stands out as the country where ‘strong disagreement’ with the statement is greatest. I don’t know why. Is it because the impacts of climate change are very apparent ? But the results are otherwise quite similar. Germany and Italy for instance are almost identical. In all cases there are very few strong ‘sceptics’: they are at their highest but still only reach 7.9%, in the UK.

As in other surveys we have done across many countries of different cultures, and almost irrespective of the overall levels of ‘climate belief or scepticism’, the values effects are much the same on this question. The Pioneers tend to have the strongest conviction that climate change is real, and the Settlers show the greatest tendency to scepticism. Note though that this is a skew, it does not mean that all Settlers are sceptics but that they are disproportionately represented amongst the sceptics. 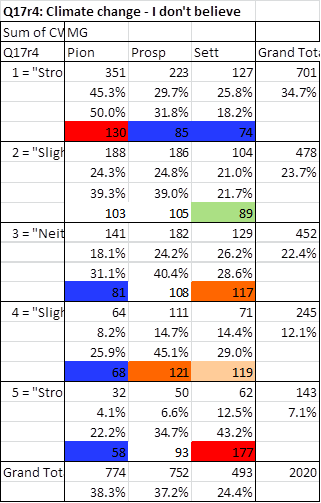 Above: data from Spain for ‘climate change I don’t believe in it’ (2015).Strongly disagree at the top, strongly agree at the bottom. 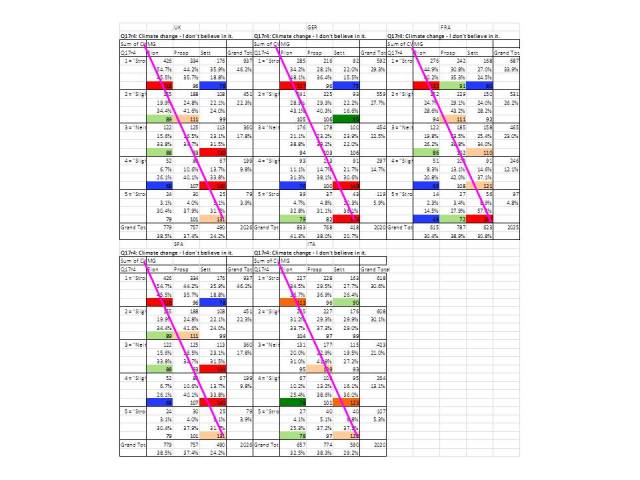 The pink trend lines (above) shows the same axis from Pioneers to Settlers in each case, with Prospectors more ‘average’ in between. An index of 100 is average for a response across the whole sample, colours indicate significant departures from the average. Red indicates that the response is positively significant at 99%, orange at 97.5% and pale orange at 95% confidence. Blue indicates that the response is negatively significant at 99%, dark green at 97.5% and pale green at 95%.

Do you believe that the Earth’s climate is changing?

This question allows respondents to pick between five options which are alternatives rather than levels of conviction about the same statement. The actual choices were:

1 = “Yes, solid evidence – mostly because of human activity such as burning fossil fuels.”

2 = “Yes, solid evidence – mostly because of natural patterns in the Earth’s environment.”

3 = “Mixed evidence, but I believe the Earth’s climate is changing.”

4 = “Mixed evidence – not sure that the Earth’s climate is actually changing.”

Spain is the country with the biggest number of people convinced that human-caused climate change is happening, followed by Italy, and then Germany, France and the UK. Nearly half of those surveyed in Germany think human made climate change is definitely happening as opposed selecting to the other options, and a majority do in Spain and Italy.

Less than 10% in the UK think nothing is happening, while in other countries it is under 5%.

In effect the intermediate options allow people to agree something is happening but to attribute all or part of it to ‘natural causes’, and to therefore deflect or deny the implication that they should do something. Such a response is intuitively most appealing to Settlers (and after them Prospectors) as they have a lower sense of self-agency than the Pioneers. In other words, they less feel that they can ‘do something about it’. Both this and the responses to the previous question are therefore unconsciously driven by a rationalisation of their expectation that they will or will not be able to change behaviour.

Here is the data on a ‘terrain map’. The colour key indicates level of agreement with the statement option, in this case UK data for: 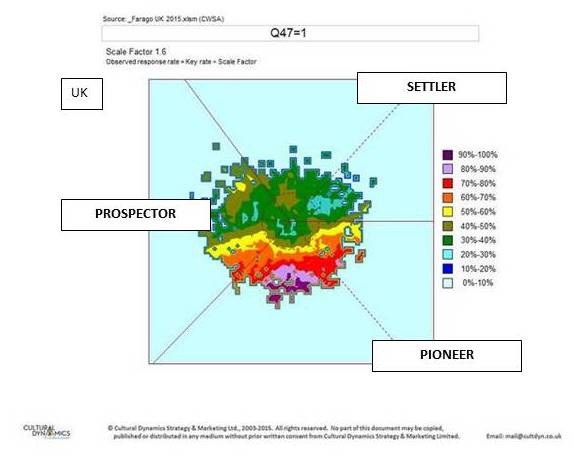 There is a similar values pattern in each country (same question, same option) although the colours vary because the amount of people chosing this option varied (generally it is the Pioneers, particularly the Transcenders, and the Now People Prospectors who most share this conviction that human pollution is causing climate change): 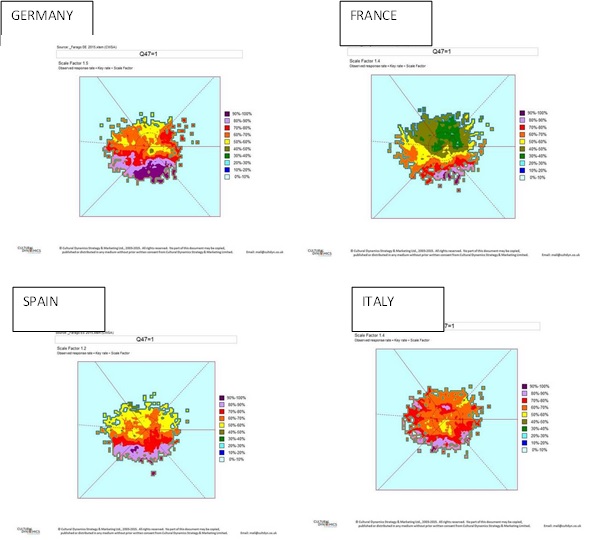 I’d Like My Next Car to Be An Electric One

Electric vehicles will be an essential near-term step in eliminating fossil fuels in response to climate change.

Stated willingness to get an electric car is much higher in Italy and Spain than in other countries, although more also ‘agree’ than disagree in France. Strong willingness to get an electric car is notably low in Germany, which is interesting given the recent VW scandal. That was followed by calls on VW to make amends by marketing more electric cars (eg at this blog and then by Greenpeace). VW now says it will do so. It looks as if Germany might not be its best market !

It’s only worth doing environmentally-friendly things if they save you money.

Politicians are always worried that people will say one thing and do another.   What if they have to trade off environmentally friendly for being better off ?

On this question, opinion is more divided in UK, Germany and France, although there is overwhelming rejection of the statement in Spain, which looks much ‘greener’. However there is no majority for ‘agreement’ – that being ‘environmentally-friendly’ is conditional on also saving money, in any country. [The Italian question was unfortunately asked slightly differently and cannot be compared but see also below]. In Germany, like Spain, a majority disagree with the statement.

Stricter environmental laws and regulations: worth the cost or cost too many jobs ? 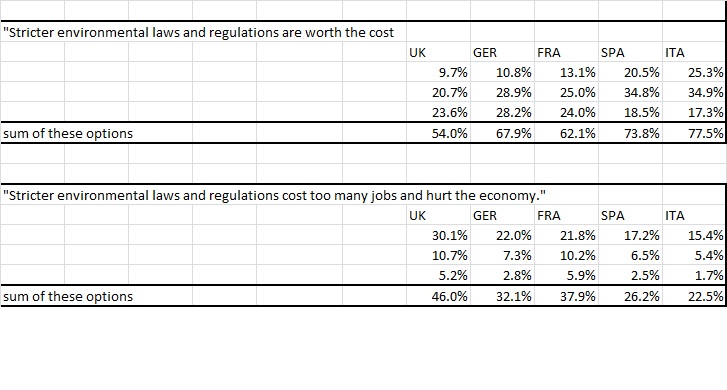 The UK (above) is the least enthusiastically green (total 54%) and Italy the most (77.5%). The UK is also the country with the least people opting for option 1, ie agreeing most that ‘stricter environmental laws and regulations are worth the cost’, at 9.7%, whereas 25.3% say this in Italy.

When it comes to the opposite opinion, France is marginally the country with the most people stating strongly (option 6 on the slider) that ‘stricter environmental laws and regulations cost too many jobs and hurt the economy’ (5.9%) followed by the UK at 5.2%), while only 1.7% share this view in Italy.   Overall, 46% of the people in the UK survey selected one of these three options, and only 22.5% in Italy.

In this question, we also see that Italy looks very like Spain, so many Italians would also probably reject the proposal in the previous question ‘It’s only worth doing environmentally-friendly things if they save you money’.   It appears that politicians in these countries have majority support for stricter environmental regulation.

From these survey questions it appears that:

Thanks to Les Higgins and Pat Dade at CDSM for sharing these data. Contact: les@cultdyn.co.uk, website www.cultdyn.co.uk