or … A Simple Unifying Tax Demand to End Fossil Fuels

Today the UK Government has set out (see BBC) to incentivise fracking through massive tax breaks, just as the Arctic plunges further into meltdown, the ‘globe bakes’ (see Washington Post) and the UK is wrapped in extreme heat.  How should environmentalists, indeed any sane member of the public, respond when we should be in an end game for fossil fuels but our politicians are digging us deeper into the hole  ?

As UK Chancellor George Osborne’s mad policy makes plain, the key is tax.  Last week the London Evening Standard invited me to write a letter commenting on Greenpeace’s epic climb of The Shard, Western Europe’s tallest building, which they did to protest against Arctic oil exploration by Shell and others.  Here’s the piece they published. 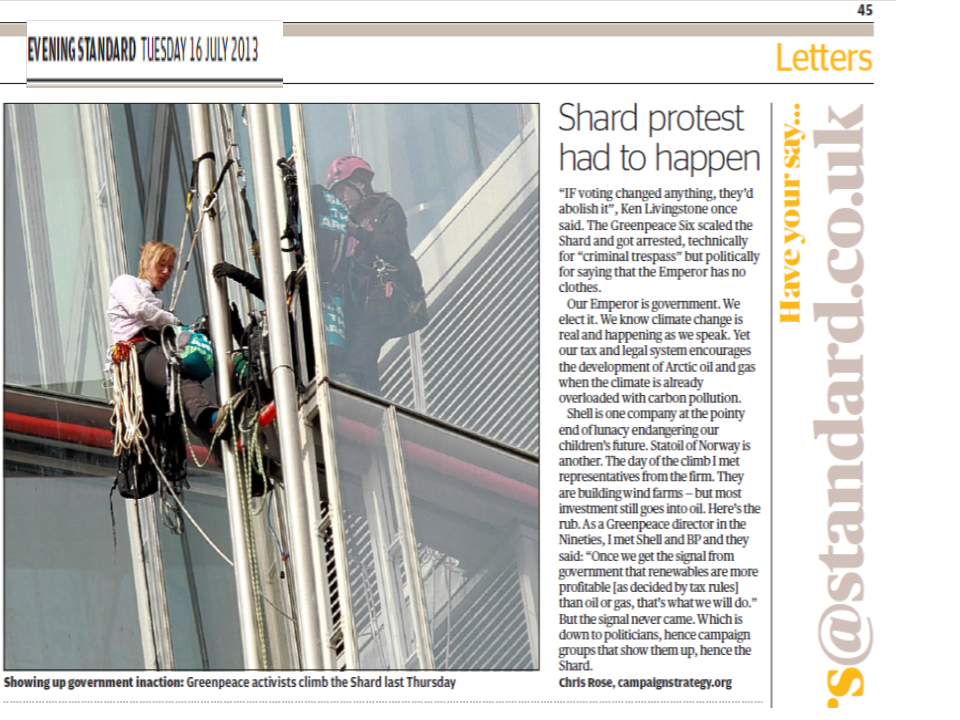 Here’s what I originally wrote (similar)

“Ken Livingstone once said “you can say anything you like in this country – so long as it doesn’t have an effect”.  The Greenpeace Six scaled the Shard, and got arrested. Technically for ‘criminal trespass’ but politically, for saying ‘the Emperor has no clothes’. Or more accurately, the Emperor is insane.

Our Emperor is government.  We elect it.  We know climate change is real, dangerous and happening. Yet tax and laws encourage development of Arctic oil and gas when the climate is already overloaded with carbon pollution.  That’s why Greenpeace scaled the Shard, to say “wake up: enough already”.

Shell is at the pointy end of lunacy and endangering your children’s future. Statoil of Norway is another. The day of the climb I met Statoil – these guys were building windfarms but most investment still goes to oil.  Here’s the rub.  As a Greenpeace Director in the ‘90s I met Shell and BP and they said “once we get the signal from government that renewables (wind, solar etc) are more profitable (decided by tax rules) than oil or gas, that’s what we will do”. But the signal never came.  Which is down to politicians, and hence us, and hence the Shard.”

So there’s a simple demand that we could all make of politicians: that they should use tax policies to make it more profitable to invest in renewables than in fossil fuels.  That would make investors move the money.  In the UK the LibDem-Tory coalition is doing the exact opposite.  The natural target with a General election coming up, is therefore the Labour Party, the main Opposition.

I’ve just spent a week or so analysing another three values segmented national surveys for Greenpeace – this time in SE Asia: Thailand, Indonesia, Philippines.  We see the same picture that we have before in the US, India, Brazil, China and Argentina.  Most people ‘believe in climate change’.  Even more say ‘it’s happening’.  And most want less investment in fossil fuels and more in renewables.  So it should be natural to demand that tax policies should be used to make it more profitable to invest in renewables rather than oil, coal or gas.  It’s a straightforward, universally applicable demand.

Why would it work ?  Because energy companies,  invest in the highest return, lowest risk projects.  There is project competition for finance inside energy companies, including renewables v oil, coal, gas etc.  Their share price depends upon the future value of those projects, and CEOs are held to account by the markets on the quarterly results.  If oil and gas look more profitable  in the portfolio then that’s where CEOs will want the investment to go.  Much more of this regime of risk and profitability is in the hands of government politicians than they may like to admit, which means it is potentially in the hands of their voters.

PS – the World Bank seems to have finally got the point (after years of work by  handful of campaigners).

Update 24 July 13:  The woman has done as much or probably more than anyone to bring the World Bank to this point is Daphne Wysham.  Read her remarkable story of persistence and 16 years of campaigning here –  http://www.ips-dc.org/blog/shift_from_coal_financing